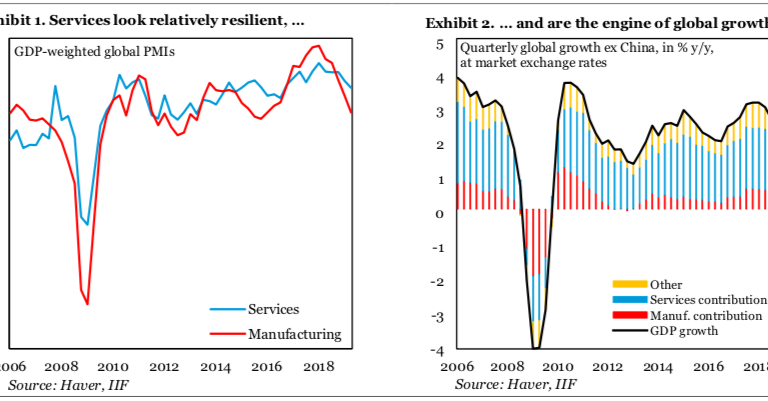 According to the Institute of International Finance (IIF), global manufacturing sentiment indicators are weak, but spillovers into services appear contained.

In its latest report, the IIF stated that it continues to have a relatively positive view on the global economy.

“We expand our analysis of manufacturing and services in the global economy using national accounts data to see where growth may suffer the most from weak manufacturing,” the IIF stated.

It showed out that services account for the lion’s share of growth across the globe and are less volatile than manufacturing.

That said, manufacturing is relatively large in many Asian emerging markets (EMs), Germany, and Japan, as opposed to other developed markets and Brazil.

The IIF found out that a few economies, such as Indonesia, are manufacturing and mining intensively, which makes them particularly vulnerable to growth shocks in China.

The IIF found out that services are the engine of global growth, through its examination on a quarterly basis for the real gross value added by industry across 32 developed markets and EMs, to establish how important the contributions of manufacturing and services to GDP growth are.

The contributions of manufacturing and services to growth comove, but in general services growth remains well into positive territory when manufacturing stagnates or contracts.

It also revealed that the size of the services sector differs across countries, accounting for up to 70% of growth in developed markets.

“Government generally accounts for a quarter of the services sector, helping explain why the contribution of services to GDP growth is less volatile than manufacturing,” it explained.

At the global level, the bar for manufacturing weakness to spill over into services is high, the IIF identifies specific countries that may be especially reliant on manufacturing to generate growth.

It showed out that China and Korea display the highest shares of manufacturing in GDP, while Australia, the UK, and Brazil lie at the other end of the spectrum.

“Few countries appear especially vulnerable at the current juncture due high exposure to both manufacturing and mining, the latter would suffer should activity in China slow further. Indonesia and Malaysia stand out in this respect. Despite having the smallest manufacturing sector in our sample, Australia is highly exposed to mining by the standards of developed markets,” according to the IIF’s report.

What procedures does Egypt need to take to attract more investors?