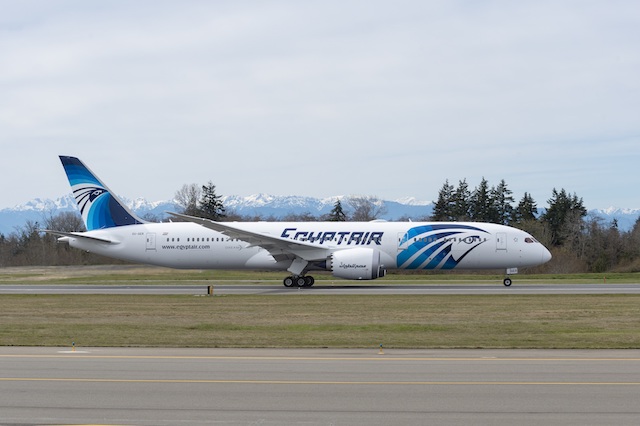 Boeing strongly works to ensure the safe return of the 737 MAX jet to commercial service and earn the trust and support of all of its customers around the world in every way possible, President of Boeing Middle East, North Africa, and Turkey (MENAT), Bernard Dunn, said, stressing it will be one of the safest airplanes ever to fly.

The new passenger aircraft has crashed twice within a few months. The first 737 MAX crash was in October 2018, in which 189 people were killed. The other crash was in March 2019 after its take-off from Addis Ababa. All 149 passengers of 33 nationalities and eight crew members onboard were killed, according to various media outlets.

EgyptAir began taking delivery of its 787 fleet in March 2019, with all six of them entering its fleet before the end of the year, he said, adding that Boeing will continue to work through numerous details related to the business opportunities identified in Egypt to establish an office in the country by 2020.

“Our strong partnership with EgyptAir dates back to 1966 when the airline ordered three Boeing 707s, the first of which was delivered in 1968. Since then, EgyptAir has ordered 68 Boeing aircraft, including six 787-9 Dreamliner jets from the Dublin-based AerCap, a global leader in aircraft leasing,” Dunn noted.

Daily News Egypt interviewed Dunn, the transcript below was lightly edited for clarity:

What are the updates of 737 MAX return? And the procedures that Boeing took to assure its safety?

Our focus is on safety and ensuring the trust and confidence of customers, regulators, and the flying public. Safety is our top priority, always has been, and always will be. Through the work we are doing now in partnership with our customers and regulators to certify and implement the software update, the 737 MAX will be one of the safest airplanes ever to fly. We continue to make progress on the path to certification, having completed the official engineering test flight of the software on 16 April — the final technical flight test prior to the Pilot certification in the United States, the FAA certification flight. Boeing test pilots have made 146,737 MAX flights totalling roughly 246 hours of air time with the updated software. During the FAA’s review of the 737 MAX software update and recent simulator sessions, the Federal Aviation Administration (FAA) identified an additional requirement that it has asked the company to address through the software changes that the company has been developing for the past eight months. The FAA review and process for returning the 737 MAX to passenger service are designed to result in a thorough and comprehensive assessment. Boeing agrees with the FAA’s decision and request, and is working on the required software. Addressing this condition will reduce pilot workload by accounting for a potential source of un-commanded stabiliser motion. Boeing will not offer the 737 MAX for certification by the FAA until we have satisfied all requirements for certification of the MAX and its safe return to service.

How do you respond to those who criticize the safety of Boeing airplanes?

We are working on the 737 MAX safe return to commercial service to earn the trust of our customers around the world.

How do you assess the cooperation with EgyptAir? Are there any updates regarding your expected deal?

Our strong partnership with EgyptAir dates back to 1966 when the airline ordered three Boeing 707 jets, the first of which was delivered in 1968. Since then, EgyptAir has ordered 68 Boeing aircraft, including six 787-9 Dreamliner jets from Dublin-based AerCap, a global leader in aircraft leasing. EgyptAir began taking delivery of its 787 fleet in March 2019, with all six of them entering its fleet before the end of the year. Today, EgyptAir continues to be a valued customer, with Boeing airplanes comprising the majority of the airline’s fleet. Currently, EgyptAir’s in-service Boeing fleet is a mix of single-aisle and twin-aisle aircraft: six 777-300ER jets (Extended Range) and 29 Next-Generation 737-800 jets. EgyptAir’s Next-Generation 737 fleet is one of the largest of its type in the region.

Last year Boeing announced its consideration to open an office in Egypt this year; do you think it would be postponed to 2020?

We continue to work through numerous details related to the business opportunities identified in Egypt. We expect a branch to be established in the 2020 timeframe.

What about your plan to open Science, Technology, Engineering, and Mathematics (STEM) centres in Egypt?

For 2019, our focus is to finalise the establishment of the Boeing STEM Centre. The centre is part of an ongoing outreach strategy by Boeing to nurture Egypt’s future workforce and support the country’s economic ambition by ensuring students are attracted to STEM fields and have the skills needed to succeed in related careers. The STEM Centre programme will be managed by World Learning.

What about your future cooperation with Egyptian universities?

In 2016, Boeing began supporting Cairo University’s aeronautical engineering programme. In 2018, Boeing expanded its support to include further curriculum enrichment. For example, the university used the funds to support 25 students working on STEM graduation projects, including a flight simulator, a weather balloon, and aircraft-accident software, and to purchase aviation books and education kits serving more than 200 students. Funds have also supported the department’s aerospace engineering project fair as well as outreach events at primary and secondary schools to raise awareness about aerospace engineering.

Will you add new models this year?

We are working on conducting the first flight of the 777X later this year – the airplane will enter service in 2020. The first 777X flight test airplane rolled out of the factory in March this year.

The 777X is Boeing’s newest family of twin-aisle airplanes. Building on the success of the 777 and 787 Dreamliner families, the 777X will be the largest and most efficient twin-engine jet in the world, unmatched in every aspect of performance. Boeing Commercial Airplanes launched the airplane in November 2013 at the Dubai Air-show. Production of the 777X began in 2017. The first flight is scheduled for 2019, with the first delivery and entry into passenger service targeted for 2020. The 777X has 358 orders and commitments from eight customers around the globe.

What was Boeing’s financial statement report in the first quarter (Q1) of 2019?

The company’s revenues in Q1 reached $11.8bn with deliveries of 149 jets. We have orders of 48 widebody jets. The production rate of 787 increased to 14 jets per month. The first 777X flight test airplane rolled out of the factory.

Does Boeing’s US headquarters plan any new visits to Egypt?

Egypt is a very important market for Boeing, and we will continue to work on growing our presence and relationship with Egypt’s leadership and business leaders.

Are there any updates regarding the ongoing outreach strategy to prepare Egypt’s future workforce?

Boeing has supported Egypt with charitable contributions since 2007 and our efforts continue to grow. Boeing has established and implemented several initiatives in partnership with a variety of organisations in Egypt, with a focus on STEM education, employability skills, workforce development, and job creation. Supporting Egypt’s workforce is a priority for Boeing and we currently have six ongoing programmes with non-profit organisations and one university programme supporting students.

What about the cooperation with World Learning in 2019?

We value our partnership with World Learning and have been working with them since 2016 on a series of programmes to support Egyptian youth and the workforce. In addition, we work with them to set up the Boeing STEM Centre. Boeing has supported four different projects to date, including 2016-Manara Grant. This project improved services provided to visually impaired women at the Light and Hope (L&H) NGO, and raised awareness about the need for inclusion to enable integration in society by equipping beneficiaries with the necessary skills to be independent. Manara built the capacity of L&H board members, staff/caregivers and visually impaired beneficiaries. Training focused on developing a new strategy that embraces inclusion, a new organisation chart, job descriptions, and responsibilities. Also, governance, results-based management, and networking.

The second project is 2017-Curiosity Machine Grant over which Boeing provided access in Egypt to its online based Curiosity Machine Design Challenges for the ministry of education’s public secondary STEM schools in partnership with the USAID-funded Egypt STEM Schools Project (ESSP). There are 11 secondary public schools benefiting from STEM Education, located in Cairo, Giza, Alexandria, Daqahleya, Assiut, Kafr El Sheikh, Ismailiyah, Luxor, Red Sea, Menoufiya, and Gharbeya governorates, with 120-150 students in each STEM school. Implementation started during the summer camp held in September 2017.

The third project is 2018-Manara Handicrafts Grant. The project targeted handicrafts like handmade carpets and straw/bamboo home articles produced by visually impaired women at L&H with the aim to diversity products and improve income for the NGO while allowing beneficiaries to learn a more marketable trade en route to independence. The project collaborates with the American University in Cairo (AUC) Graphic Design Department where students improve the design of existing L&H handicrafts and design new ones, better market the new handicrafts to a younger audience to sell better, and conduct a cost analysis to make their production more effective. The project trains visually impaired women on new skills to exercise their right to work. In academic year 2018/19, students are producing new designs for straw lampshades and hand knitted handbags.

The project aims to directly serve 48 visually impaired beneficiaries from at least two handicrafts departments within L&H to develop new handicrafts with assistance from AUC student designs. About 150 other beneficiaries are expected to indirectly benefit from the projects. It is presently under implementation.

The fourth project is 2019-SOTNA-Sign Outreach, Telecommunications and Applications Grant. The project primarily serves the National Association for the Deaf NGO (NAD) to develop short sign language Arabic language classes for deaf and mute children attending first year primary special education schools. Classes are videotaped by children and compiled in a YouTube channel or smartphone app to help deaf and mute students learn Arabic. The project will help unify sign language by using the video content of a computer-based CD, already produced by NAD, to develop a sign language dictionary used all around the Arab world in addition to improve new apps for the visually impaired.

App development and improvement is provided by Nokia Egypt. The project will continue to train visually impaired women at L&H on the proficient use of smartphones and assist in life skills training to new beneficiaries, it will also support psychology therapy sessions by qualified psychologists to help visually impaired women overcome their individual problems with inclusion. The project aims to directly serve at least 50 deaf beneficiaries from NAD and at least 150 non-NAD members indirectly impacted through its various products. Also, at least 100 visually impaired beneficiaries will benefit from the new smartphone and life skills training in addition to psychology sessions. The project is presently under implementation.

AIWF, AUC to hold Women as Engines of Economic Growth conference in Cairo on 17 September

Assiut handicrafts are on the verge of extinction: Usama Ghazali