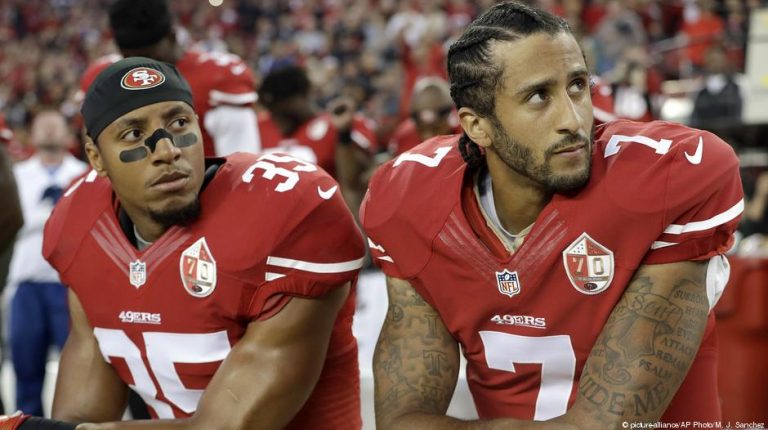 The league has agreed to pay the former star quarterback an undisclosed sum after blacklisting him. Kaepernick has emerged as an advocate and activist after his pre-game demonstrations cost him his football career.Colin Kaepernick and his former teammate Eric Reid have settled their collusion cases against the National Football League out of court for an undisclosed sum, the league and the athletes' lawyers confirmed on Friday.

"For the past several months, counsel for Mr. Kaepernick and Mr. Reid have engaged in an ongoing dialogue with representatives of the NFL. As a result of those discussions, the parties have decided to resolve the pending grievances. The resolution of this matter is subject to a confidentiality agreement so there will be no further comment by any party," read a statement issued by both parties.

Kaepernick and Reid were blacklisted by the league in 2016 for taking a knee while the US national anthem played before games, a gesture meant to draw attention to police brutality and racial inequality.

After they were both cut loose from the San Francisco 49ers, Reid missed three games before being signed by the Carolina Panthers for a minimal contract. Kaepernick, the face of the movement that has spread to other sports, was never signed back to an NFL team despite having led the 49ers to their last Super Bowl appearance.

The 31-year-old quarterback's demonstration was quickly criticized by the far-right in the United States, and President Donald Trump suggested that the league needed to fire players who did not stand for "The Star-Spangled Banner," which is played ahead of sporting events in the US.

Kaepernick filed his grievance in August 2017. An arbitrator denied the NFL's request to have the case thrown out, suggesting that there was enough evidence of collusion to go to trial.

While off the field, the athlete has become a visible advocate fighting against racial and social injustice. He runs camps and workshops for disadvantaged youth, and he and his girlfriend, Nessa Diab, have also become known for their philanthropic donations. He was also the star of a now famous Nike ad campaign that said: "Believe in something. Even if it means sacrificing everything."

After news of the announcement broke, the athlete's name immediately began trending on social media, showing mostly an outpouring of support for Kaepernick:

There have been conflicting reports about whether Kaepernick took the deal to free himself up to play in the upstart Alliance of American Football league, though it doesn't appear as yet that any negotiations between the two were ever serious.

The blacklisting of Kaepernick and Reid is one of several major controversies the NFL has been embroiled in over recent years, which also include its attitude towards brain injuries brought about by concussions, its permissible attitude towards players accused of domestic violence, and teams' treatment of their mostly female cheerleaders.

The widespread impact of domestic violence