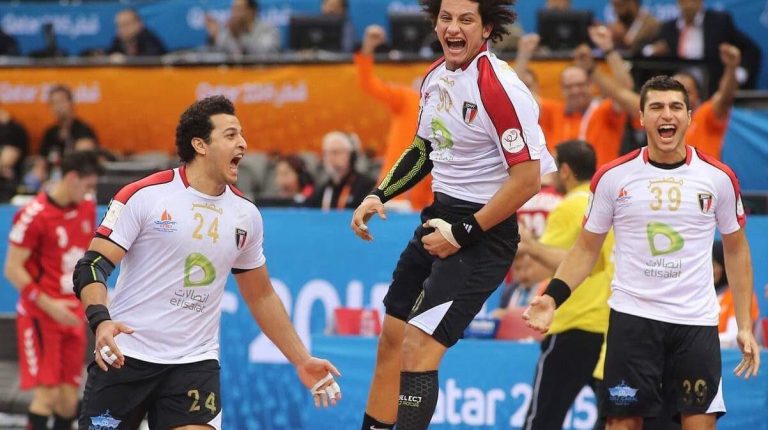 This is the 15th time for the Pharaohs to take part in the competition since their first appearance in the 1964 edition in the Czech Republic. The best performance by the Egyptian team was in the 2001 World Championship held in France where Egypt seized the fourth place. The team then included some great players, such as Hamada Roby; Hamada El-Nakib; Mohamed Abdul Ghani; Ashraf Awaad; Saed Hussain; Saber Hussein; Gohar Nabil; Magdy Aboul Magd; Marawan Ragab; Sherif Moamen; Ayman El-Alfy; Ahmed Salem; Hazem Awaad; Hussein Zaky; Ahmed El-Attar, and Ahmed Belal.

Egypt will play in Denmark against Sweden; Hungary; Qatar; Argentina, and Angola.

The Pharaohs entered a closed training camp in Latvia in preparation for the tournament, under Spanish coach David Davis. The camp ended on 31 December. The team will then play a few of friendly games in Denmark before the competition begins.

The first three teams from the four groups will qualify to the main round composing two groups, each of six teams arranged according to the points of each team in the first round. The first two teams from each group will qualify for the semi-finals, and then the final game on 27 January.

The national team will begin its World Cup campaign with a difficult clash against Sweden on 11 January; then against Qatar on 13 January; Argentina on 14 January; Hungary on 16 January, and finally Angola on 17 January.

Head of the Egyptian Handball Federation, Hesham Nasr, confirmed that the team has a good chance to qualify from the first round despite its difficulty. This year, three teams will qualify from each group, instead of four.

Nasr expected Sweden and Hungary to qualify as the first and second teams, leaving the third up for competition between Egypt, Argentina, and Qatar.

Egypt’s first participation in the World Championship see the Pharaohs in the 14th place. The second time was in Sweden in 1993, when the team ranked 12th. In the 1995 edition, the Egyptian team ranked sixth in Iceland. They also came in the sixth place in 1997 in Japan. Egypt hosted the 1999 edition and ranked then seventh. The best achievement by the Pharaohs was the fourth rank in France in 2001. Portugal hosted the tournament in 2003 when the Egyptians ranked 15th. In 2005, Tunisia hosted the championship and the Egyptians seized the 14th place. In the 2007 edition held in Germany, Egypt came 17th. In Croatia in 2009, the Egyptian team ranked 14th.

The recent editions of the World Handball Championship witnessed deterioration in Egypt’s performance. Egypt ranked 14th in 2011 edition in Sweden; 16th in Spain in 2013; 14th in Qatar in 2015, and finally 15th in France in 2017.

Mada Masr is unlicensed, security raid of its headquarters was legal: Shoukry

When sports challenge belonging to a homeland