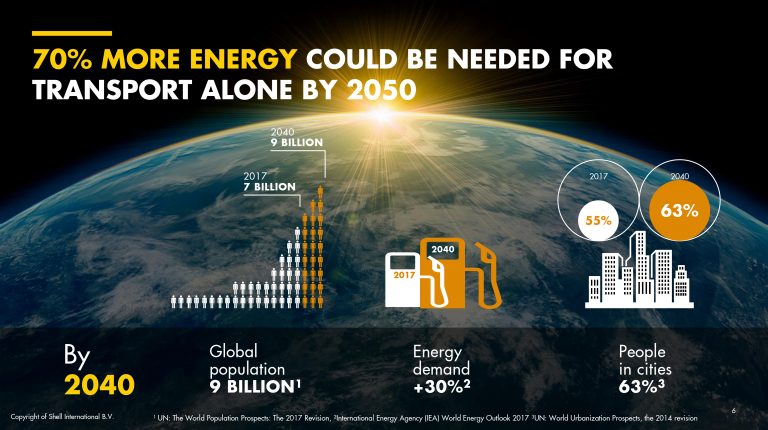 The fuel economy is becoming one of the most significant issues affecting various industries, as legislators around the globe are setting new targets that will change how the automotive, lubricants, as well as various other industries operate.

Earlier in 2018, the EU agreed on tough automobile fuel economy targets for 2030, but was quickly criticised by automotive manufacturers for being unrealistic, while environmentalists stated that the measures did not go far enough.

The new adopted rules call for average fuel efficiency across manufacturer’s fleets to reach an equivalent of about 92 miles per US gallon (mpg) by 2030, up from 57 mpg in 2021. 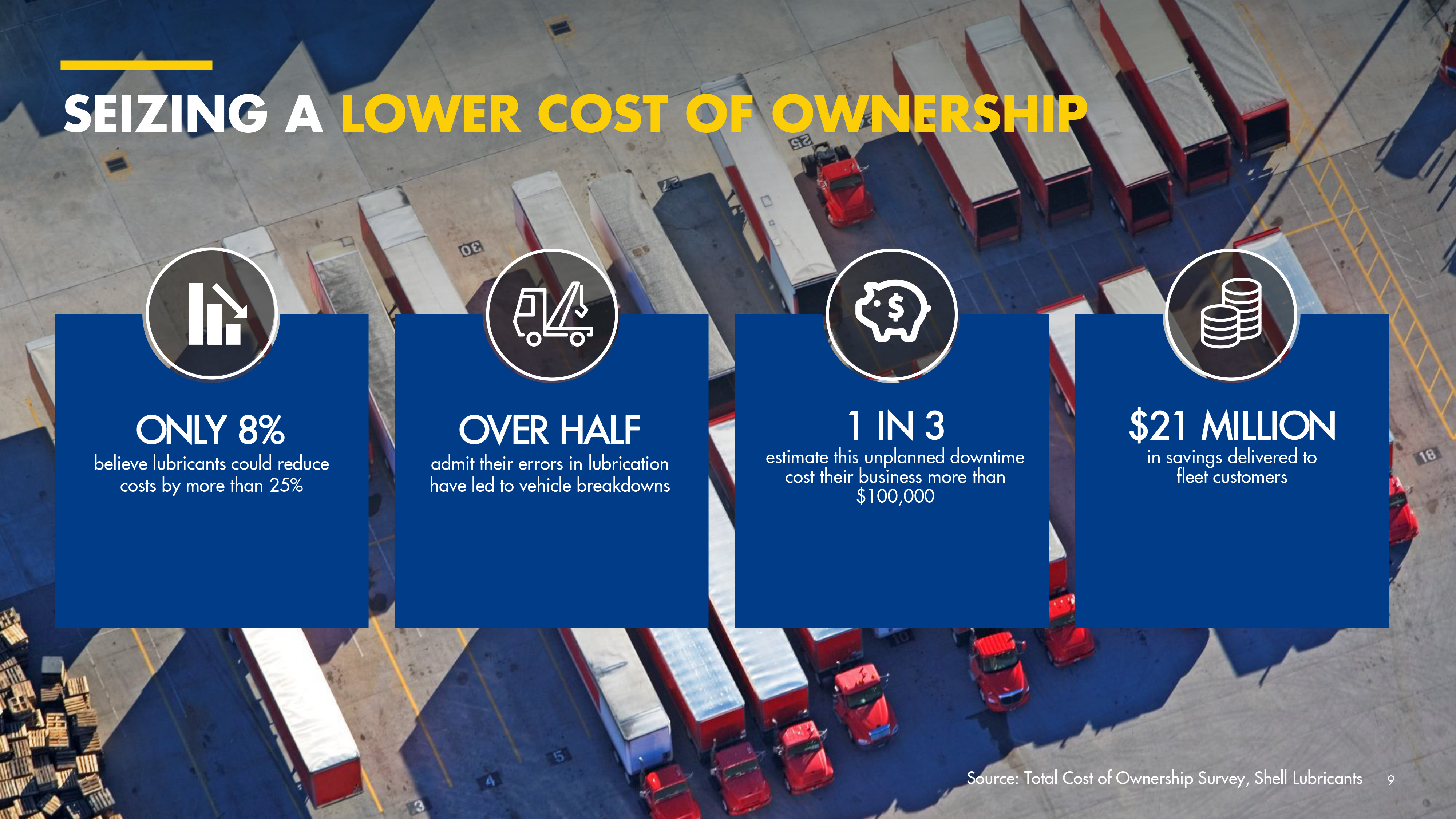 To achieve this target, an enormous contribution from electric vehicles is needed, which is still a distant goal, given electric cars’ high prices and the lack of utility, which bodes ill for daily motorists commuting to work. Without a huge improvement in the range of electric cars and a large decrease in prices, many experts argue that the fuel economy’s set targets are yet unreachable.

As for the lubricant manufacturers, adapting to the future of freight and commuting is the way forward, with the ongoing improvements in engines and transmissions.

The energy giant, and lubricant manufacturer, Shell, revealed some of its studies on the topic, focusing on the road to achieve optimal fuel efficiency and its influence on lubricants, the future of freight, as well as fleet management.

What drives the lubricants industry’s revolution?

Shell conducted a survey to find out the main drivers of the lubricant industry’s evolution, and according to the results, the top three drivers of efficiency in modern engine technologies are improved combustion efficiency, better fuel efficiency, and reduced emissions.

Moreover, according to the survey’s results, only 8% believed that the correct lubricant could reduce the vehicle’s costs by over 25%, while anover half admitted that errors in lubrication led to vehicles’ breakdowns, and one in three estimated that this unplanned downtime cost their business more than $100,000, and $21m in savings delivered to fleet vehicles’ customers.

During a presentation, Richard Tucker, the general manager of Shell B2B Lubricants and Supply Chain Technology, explained to Daily News Egypt, that although there are electric trucks to be launched soon, yet he thinks that electrification should first start in passenger cars, adding, “I think the penetration of electric vehicles (EVs) in proper heavy-duty equipment will be much slower, as the battery technologies aren’t there yet, as they still need frequent recharging. So ultimately there will be a smaller market for Rimula type oils when more electric trucks are on the road.”

However, Tucker said that either way, EVs still require lubricants, as there are transmissions, cooling liquids, etc, but they will not need engine oils, except for hybrid vehicles operating with either gasoline or diesel, and electricity.

Moreover, commenting on the survey result which showed that only 8% of the people acknowledged the value of oil in reducing the total cost of maintenance, he explained that oil is not often considered to be that important to fleet’s operation, but is often regarded as a cost for the maintenance manager. He explained that sometimes when companies come under cost pressure, they look for cheaper oils, which is a challenge for a company like Shell to continue to demonstrate its value as it doesn’t produce cheap oil, rather performance oils. He added, “We don’t do that well enough, we need to do better,” he said, adding that this survey is the first step of reversing this belief.

Furthermore, he revealed that in Shell’s Research and Development (R&D) Department, they do not only work on new products, but also on existent ones, in order to reduce the cost and improve the performance. 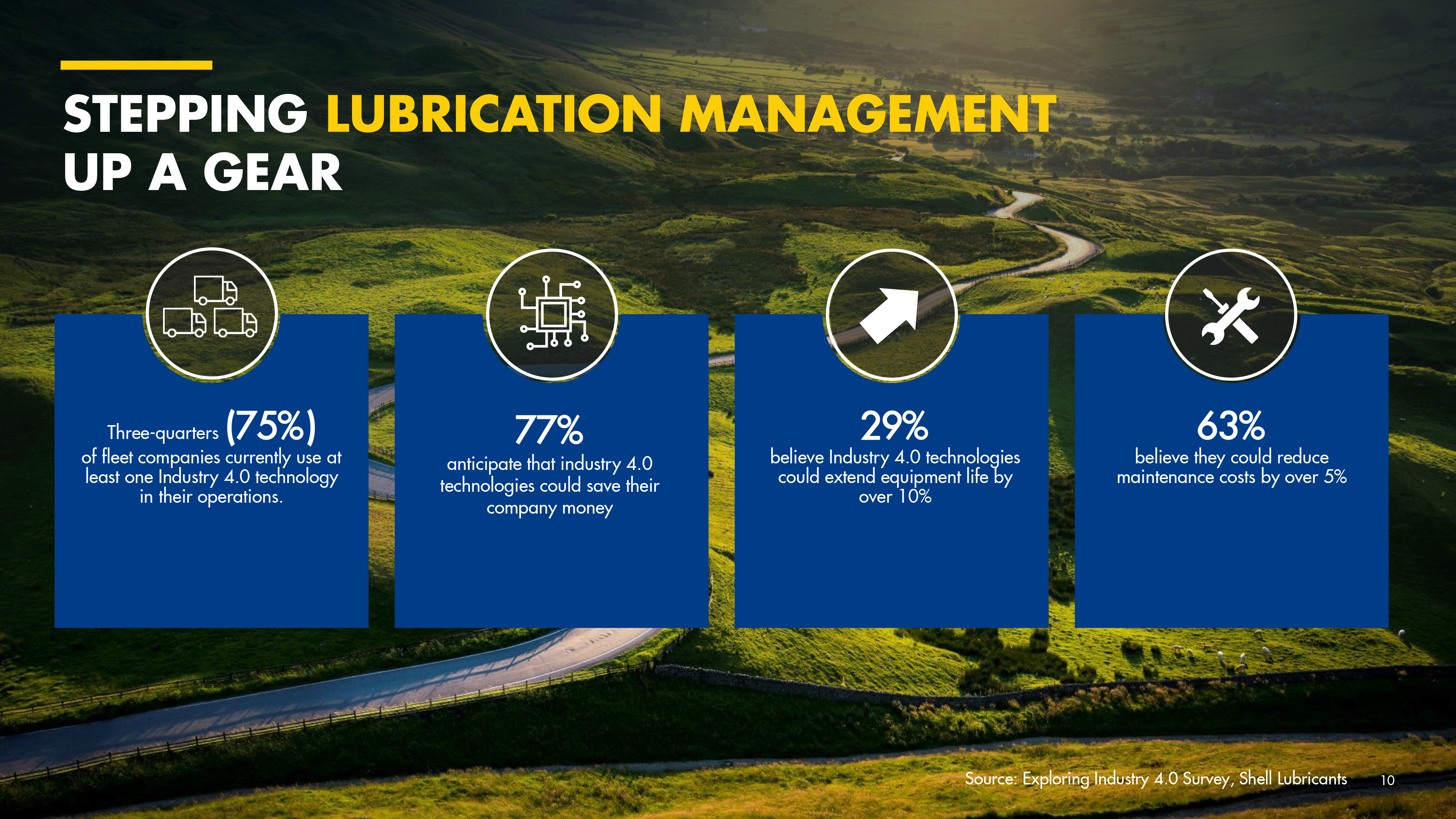 When it comes to lubricants, Shell is trying to minimise the environmental impact of lubricants on the one hand, while on the other, it is enabling new technologies for vehicles. As for example, the transmission for hybrid cars.

Tucker explained, “Shell Corporation, not only Lubricants, is proactive when it comes to the energy transition, we sell more gas than oil these days,” he stated, adding “At the end of the day, we are an energy company, we also invest a lot of money in what we call new energies. We have around seven wind farms, we also invest in solar energy technologies, as we aim to diversify our energy portfolio.”

On the other hand, Shell gas-to-liquids (GTL) technology turns natural gas into high-quality liquid fuels, base oils for lubricants, and other liquid products that are usually made from oil.

The GTL technology converts natural gas – the cleanest-burning fossil fuel – into high-quality liquid products that would otherwise be made from crude oil. These products include transport fuels, motor oils, and ingredients for everyday necessities like plastics, detergents, as well as cosmetics.

In response to a question on Shell’s role in reducing the usage of aluminium pistons in engine and replacing them with steel, he explained that it is tough to convert aluminium pistons to steel ones, as the strength for the combustion pressure in the engine is essential, the switch to steel pistons poses a challenge in engines because steel conducts heat very well so the oil temperature would be higher. This means that higher quality lubricants will be needed as the lubricants’ temperatures, underneath the pistons, are higher if converted to steel, so the lubricant needs to be able to resist such higher temperatures. For every 10 degrees higher, the lubricant’s oxidation rate doubles.

“As a company, Shell invests around $1.3bn in R&D, making them the biggest company in this area’s investments,” Tucker concluded.

Freight emissions are on the rise but must decrease

According to the International Energy Agency, trucks currently account for only 18% of the global freight activity, with trucks consuming 17m barrels per day making them the second largest source of the global oil demand. Currently, 67% of freight and 35% transport-related CO2 emissions come from trucks.

Without further policy efforts, trucks will account for 40% of the oil demand growth in 2050, and to 15% of the increase in global CO2 emissions.

Emissions’ regulations are driving a focus on fuel economy

different oil-truck combinations, using 18 diesel engines from many of the most recognisable manufacturers, testing eight engine oils ranging from 20W-50W to 0W-20W, across three continents.

Electric cars in Egypt: need to cope with global market or social significance?

UN committed to create space for conflict resolution in 2019