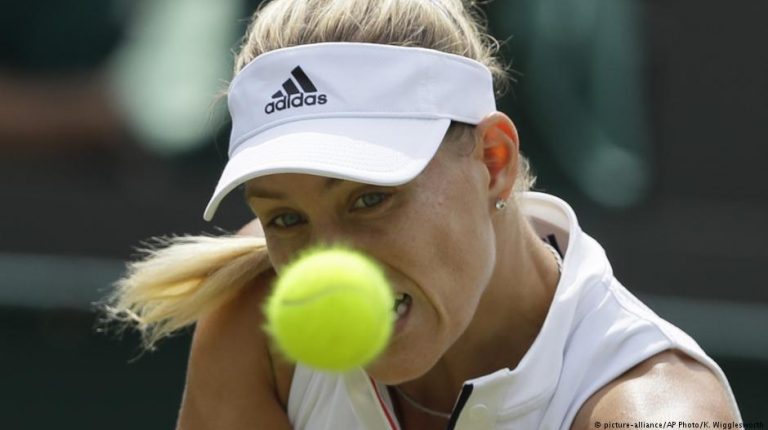 Angelique Kerber is set to embark upon the 2019 tennis season with a new coach and renewed energy. Having won Wimbledon in 2018, the only Grand Slam missing from the German tennis star’s collection is the French Open.Angelique Kerber was recently asked about why the enthusiasm among the German public for her and Alexander Zverev doesn't seem to be what it was for Steffi Graf and Boris Becker in the 1980s.

"Becker and Graf, I think that was a different time," Kerber replied. "I think we are reaching people's hearts," she added with a smile.

While Kerber may find such comparisons inappropriate, the Wimbledon champion may have more in common with Graf than many think. Everything she does, she masters with complete professionalism; be it on the tennis court, dealing with reporters' questions, or facing the cameras at celebrity events. With the help of her manager, Aljoscha Thron, Kerber projects a very carefully controlled public image.

In search of the young Angie

If you go looking for photos of a young Angelique Kerber on the tennis court, you will find that hardly any exist – apart from a few that show her at the family tennis center in Puszczykowo, Poland. And you won't find many people who have memories of the young Angie to share either.

It was only 14 years ago that Barbara Rittner, the head of women's tennis at the German Tennis Association (DTB) first came into contact with Kerber.

"At the end of 2004 I held a series of scouting sessions in Hanover. Angie turned up late because she had just won another tournament," Rittner told DW. "I had only just stopped playing professional tennis myself. We hit it off, Angie didn't make a single mistake for half an hour, grinning all the way."

That half hour convinced Rittner, who had just been appointed as Germany's Fed Cup captain at the time, that Kerber had what it took to develop into a special player.

However, after winning the Wimbledon final this past summer, Kerber related to journalists at the All England Lawn and Tennis & Croquet Club the story of how she had almost quit tennis in 2011 because she was losing a lot and no longer believed she would ever achieve the big breakthrough she had always aspired to. It would be five years before she did so by winning the 2016 Australian Open. But even since then, the now 30-year-old has had to work hard for every win.

"Angie is the sort of player who has to find her way into a tournament," Rittner said. "If her arm isn't working the way she wants it to, she has to work her way into the tournament and get into her fighting mode – which makes her particularly strong. Sometimes it helps for her to be given a scare. This can help her tap into the self-confidence that she has built up through all of the matches she has won and from the fact that she knows she is capable of raising her game during a the course of a match."

Wimbledon was the third piece in her Grand Slam collection, having won both the Australian Open and the US Open in 2016. She has also put behind her a catastrophic 2017, when little seemed to go right on the tennis court. Now, with Serena Williams in the twilight of her career at age 37, there is no reason to think that if Kerber manages her body right and avoids serious injuries, she could go on to win a few more Grand Slams.

However, apart from Serena, the competition isn't getting any easier to beat. At 27, Simona Halep is at the peak of her powers – and Rittner also expects 20-year-old Belarusian Aryna Sabalenka to make some noise in 2019.

We'll start to get an idea of what kind of a year 2019 will be for Kerber beginning next month, when she represents Germany at the Hopman Cup in Perth, before moving on to the Australian Open. The spring will bring with it the clay-court season, including the French Open, which so far has never been her tournament.

"If you have already won the other three titles, Paris is a special challenge," Ritter said. "Clay is not her favorite surface, it gets very slow when it's wet. But you never know. A lot of things have to go right, but if the weather in Paris is nice, including the week before the tournament, there could be an opening"

However, Rittner is confident that that Kerber can defend her title in Wimbledon – which she will set out do do under the guidance of her new coach, Rainer Schüttler.

Rittner believes that Schüttler be able to inspire Kerber to push herself to her limits in training and possibly work on what was once a weakness in her game.

"Her serve will never be one of her great strengths," Rittner said. "But she serves harder and more consistently in training than in matches, so maybe she can become more aggressive. In general, it's about her offensive game, she is unbelievably good with the volley – in this more aggressive, more daring game. I'm sure they'll work on it."

Perhaps Angelique Kerber can become even a bit more like the great Stefanie Graf – who happens to have won a total of seven Wimbledon titles.