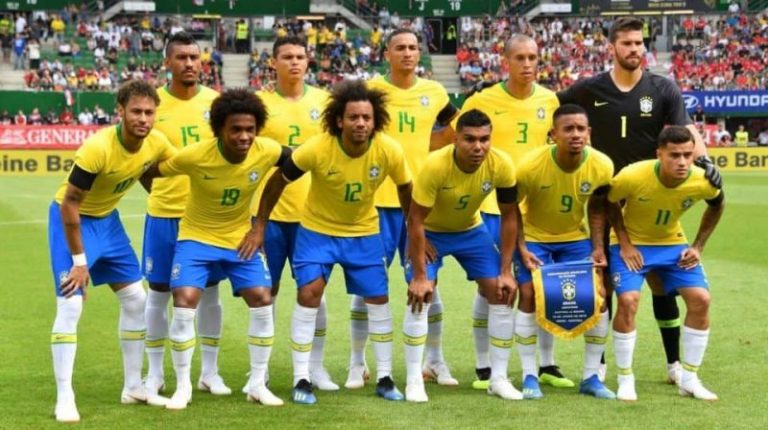 Brazil will win its sixth World Cup title, defeating Germany in the final on July 15, according to the The World Cup and Economics report issued by the Goldman Sachs Group on Tuesday.

“When Lionel Messi observed that ‘in football…talent and elegance mean nothing without rigor and precision,’ he was clearly thinking as much about the econometrics behind forecasting the score as the tactics behind winning the match. But while selecting the best starting 11 requires human judgment and experience, choosing the best variables to predict the outcome of a game is better left to a statistical model,” the report said.

Furthermore, the predictions made in the report are based on 200,000 models, harnessing recent developments in machine learning through mining data on team characteristics and individual players to work out which factors help to predict match scores. Consequently, this allowed the group to predict various outcomes, which are combined to produce an overall projection. After that, one million possible evolutions of the tournament to gauge the probability of each team progressing through the rounds is simulated.

According to the report, France has a higher probability than Germany of winning the World Cup. But its (bad) luck in the draw sees it meeting Brazil at the semi-final stage, and the team may not be strong enough to make it past Seleção.

Those looking for a repudiation of Gary Lineker’s observation that “football is a simple game; 22 men chase a ball for 90 minutes and, at the end, the Germans win” will not be disappointed, as the report forecasts that Germany will beat England in the quarter-finals on 7 July.

In Spain and Argentina’s cases, both are expected to underperform, losing to France and Portugal in the quarter-finals, respectively. Meanwhile, Russia is expected to fail in the group stage, despite the traditional boost that comes with hosting the competition.

Football and machine learning: How the forecasts work

The machine learning models used in the report can sift through a large number of possible explanatory variables to produce more accurate forecasts than conventional alternatives. This is done through feeding data on team characteristics, individual players, and recent team performances into four different types of machine learning models to analyse the number of goals scored in each match.

The models then learn the relationship between these characteristics and goals scored, using the scores of competitive World Cup and European Cup matches since 2005.

After that, multiple team-level and player-level variables are grouped together for ease of exposition, of which four characteristics stand out. Team-level results are the most important driver of success. Recent team performance—measured with the Elo rating system—accounts for about 40% of overall explanatory power. But even after taking team performance into account, individual players make a difference.

The report finds that player-level characteristics—including the average player rating on the team, as well as attacking and defending abilities—add another 25% of explanatory power. Recent momentum—as measured by the ratio of wins to losses over the past 10 matches—matters. Similarly, the number of goals scored in recent games and the number of goals conceded by the opponent team help gauge success in the next game.

Accordingly, Brazil is clearly the strongest team across these metrics, with the highest Elo rating, talented individual players, and a good win/lose ratio in recent games.

Moreover, the report indicates that France and Germany run neck and neck for second place: Germany has a higher Elo rating than France, but France has performed better in recent games. And France appears to have a more unfavourable draw than Germany; if France and Germany started in each other’s respective group, the most likely result would be a Brazil-France final (although the winner would remain Brazil).

Meanwhile, Spain’s chances are likewise diminished by a tough draw, facing Portugal in the group, and needing to get past France and Brazil in the knock-out stages. Finally, Argentina ranks higher on Elo than Portugal, but loses to Portugal in the quarter-finals due to poor performance in recent games.

However, the report states that it is difficult to assess how efficient these predictions are. The forecasts remain highly uncertain, even with the fanciest statistical techniques, simply because football is quite an unpredictable game. This is, of course, precisely why the World Cup will be so exciting to watch.

Egypt is the most successful national football team in Africa, having won the Africa Cup of Nations a record seven times. But it has found it surprisingly difficult to qualify for the FIFA World Cup. Egypt will be making only its third appearance at the World Cup in 2018 and its first in 28 years.

The Pharaohs made a nerve-jangling qualification in 2017 after finally scoring an injury-time penalty against Congo, scored by star-striker and talisman Mohamed Salah. And therein lies Egypt’s greatest strength, as well as its biggest weakness.

Egypt’s national squad is coached by the former Valencia coach, Argentine Hector Cuper, and endowed with a number of experienced professionals, starting with 45-year-old goalkeeper Essam El Hadary, who could become the oldest player ever at the World Cup, Aston Villa’s consistent wingback El Mohamady, a capable mid-fielder of Arsenal’s, Mohamed El Neny, and Stoke City’s Ramadan Sobhi. But without question, the team’s fortunes have been heavily reliant on the goal-scoring prowess of Liverpool forward Salah, the report states.

Moreover, the report explains that Salah enjoyed a prolific 2017/2018 season with Liverpool, with his 44-goal haul in all competitions (never bettered in a single Premier League season), eliciting justifiable comparisons with Cristiano Ronaldo and especially fellow left-footed forward Lionel Messi. So his shoulder injury, early in the showpiece Champions League final between Liverpool and Real Madrid in late May, was all the more pivotal. From here, ‘Salah’s shoulder’ is to Egypt what ‘Beckham’s metatarsal’ was to England ahead of the 2002 World Cup, when everyone from the sage at the local mosque to the president will have strong views on shoulder injuries, recovery times, and his ability to star in Russia.

While Salah himself is optimistic about his prospects, without his goals, the team will need the solidity of the Aswan Dam at the back and the cunning of a cat further forward to get out of a tough but not impossible Group A, which includes the hosts Russia, as well as Saudi Arabia and Uruguay.

Was the football renaissance the other side of economic recovery?

Both Egyptian football and its economy are recovering after the period between 2011 and 2016; the political uncertainty that followed the 2011 revolution took a heavy toll on Egypt’s economy and its football. After a riot at a football game between clubs Al Ahly and Al Masry in February 2012, the domestic league was suspended for a couple of years. Over that period, the national team failed to qualify for three successive editions of the Africa Cup of Nations, finally making it back to the competition in 2017, when it reached the final, only to lose against Cameroon.

Political tensions also brought to light the underlying fragility of Egypt’s economy. Following a period of declining growth, falling tourism receipts, and a widening current account deficit, in November 2016, the Egyptian authorities took a number of decisive steps to address the economic crisis.

The currency regime was liberalised, with a deep devaluation of the official exchange rate; a three-year fiscal consolidation programme was launched to reduce high budget deficits; monetary policy was tightened to contain inflationary pressures; and reforms were launched to improve the business environment.

While there are still significant risks of delivery, so far, the programme has been surprisingly successful; the current account deficit is gradually correcting alongside inflation and business, and investor confidence has been restored. Indeed, one of the key risks is that Egypt may be a victim of its own success. The combination of high treasury bill yields and an undervalued exchange rate has attracted plenty of foreign investors into the local bill market. There is a risk that if the recent market volatility extends, Egypt could be hard hit simply because that is where a lot of the investment is.

On the plus side, the upturn in the fortunes of Egypt’s football suggests that there is more room for the economic revival to extend. The exhibit, which is clearer than your average hieroglyphic script, suggests that the peak in tourist arrivals coincided with Egypt’s best recent football ranking in 2010, and the recent recovery may therefore be a good omen.