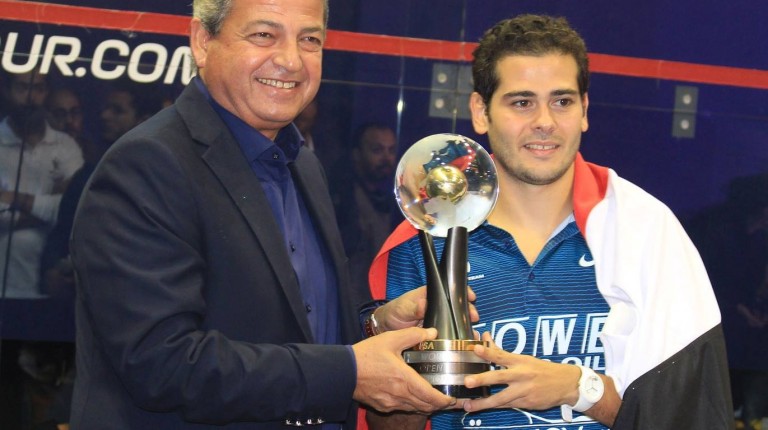 But his victories did not stop there, as the Egyptian champion surprised the world by winning the 2016 Wadi Degla PSA Men’s World Championship, which concluded at the beginning of November.

As a player for Gezira Sporting Club, the club held a ceremony to honour the world champion.

Daily News Egypt sat down with Abdel Gawad to talk about his victories and his financial and moral challenges.

Did you expect to win at the 2016 Wadi Degla PSA Men’s World Championship?

No, I did not expect it at all. It was a difficult championship. Last year, at the 2015 World Championship, which took place in the United States, I only reached the round of 16. I had aspired this year to pass that round and be qualified for the quarterfinals.

I felt then that I have a great chance to win the championship, and I did after I defeated my colleague and compatriot Ramy Ashour in the final match with a score of 3-1.

You are also the champion of the 2016 Al-Ahram Squash Open, which took place in September. Did winning Al-Ahram give you a push?

Being qualified for the final was a great achievement that gave me a great push.

These two victories were among others that gave me the confidence that I am close to the level of the world champions and that I can match the victories they are achieving.

I started with a ranking of 600 and now, I am ranked third.

It is known that squash, for a professional player, is a sport that requires high financial costs. Did you face any financial challenges throughout your career?

When I was 18 years old, my parents supported me by covering my travel costs to compete in championships abroad. But even winning these championships did not cover the expenses we had to pay.

My parents supported me financially, bearing in mind that I had to travel about 13-15 times a year.

When I was about 20-years-old, I was able to pay for my expenses, as I started to play at better championships with higher money prizes. During that time, my performance improved a lot, as well as my ranking.

Of course it is an expensive sport, but if you succeed in it, you will cover its expenses through the championships’ prize money and sponsorships.

Who are your financial sponsors?

Unfortunately, I do not have sponsors in Egypt, although I wish did. My sponsors are from the United States and Germany.

I suppose that after being the world champion, you will have sponsors from Egypt.

Maybe, but until this moment, nothing is confirmed. I expected this after winning Al-Ahram, but nothing happened.

What about the moral challenges that you faced throughout your sports career?

The common challenge that faces any sports player is injury. Squash requires hard mental and physical effort. Also as squash players, aside from training, we are always travelling and competing in championships.

What are your ambitions in the sport?

Since I was young, I wanted to be the world champion, and my dream came true. I still want to win the title a few more times. It is a dream that will never die.

I also strive to be ranked first internationally.

Do you think squash will be included in the Olympic Games in the future?

Well, I believe that squash deserves to be part of the Olympic Games, as it is a very enjoyable sport. Also the glass court—where the matches are held—is easily set up in any place. For example, despite the Giza Pyramids being a hard place to hold championships, the glass court was set up there for Al-Ahram Squash Championship, and the championship was a great success.

I believe it also has to do with politics. In the international ranking, seven Egyptian players are in the top ten. So I think that when other countries develop in the sport, it could be included as an Olympic one.