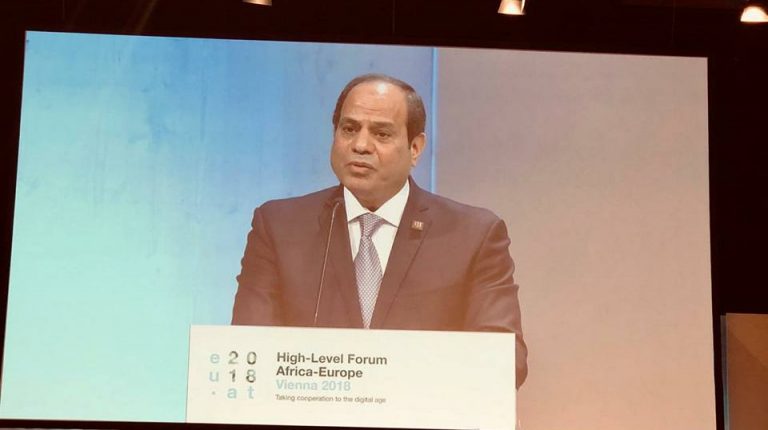 Africa has to get over calls for protectionism through increasing cooperation with the world, President Abdel Fattah Al-Sisi said in his speech before the Africa-Europe Forum taking place in Vienna on Tuesday.

He also stressed that digitalisation is a main key to open the continent’s markets and economies to the world trade. He described technology as a gate to “sustainable development and a cornerstone for building competitive and diverse economies, and for building modern societies.”

He cited that 60% of Africa’s population is under the age of 25, and 12 million of whom joins the labour market every year.

The Africa–Europe Forum was hosted by Chancellor of Austria, Sebastian Kurz.

Further, Al-Sisi said that Africa has achieved several successes during the last ten years in terms of sustainable development. However, he noted, economic and security challenges in African countries hindered this achievement.

The president also pointed out that civil wars and terrorism, as well as foreign intervention were other reasons that make the African Peoples do not feel the effect of development on their lives.

He added that launching the Africa Games and Digital Applications Initiative aimed at preparing a new generation capable of leading digitisation programmes, managing work systems in the digital environment, and encouraging technological innovation not only in Egypt but in Africa as well.

In his speech, Al-Sisi said the communication and information technology sector has become a key element in supporting the state’s development plans and a locomotive of its efforts to establish a competitive and diverse economy based on innovation and knowledge.

The Africa–Europe Forum is taking place in the attendance of leaders from the two continental blocs, African Union (AU) and the European Union (EU).

The forum focuses on digital cooperation between the two blocs. Over 1,000 participants are expected at a parallel business-to-business event, including about 100 African start-ups

On Monday, Al-Sisi and Kurz, witnessed the signing of a number of memorandums of understanding between the two countries in different fields, including entrepreneurship, education, research, and transportation.

Integrating Africa is a must: head of African Programme at ACPSS

Egypt’s foreign policy aiming for a stronger presence in Africa