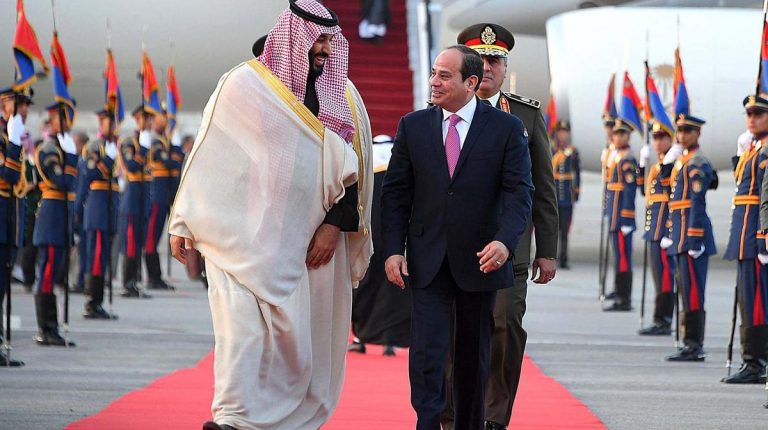 Saudi Crown Prince Mohammad Bin Salman arrived on Monday to Cairo for a two-day visit as part of his foreign tour that kicked off early on Thursday last week, the Egyptian presidency’s spokesperson Bassam Rady said.

Bin Salman was supposed to visit Tunisia on Tuesday, but his call was cancelled after Tunisian activists and the country press syndicate rejected his visit.

In an open letter to the Tunisian President Beji Caid Essebsi, the syndicate expressed its disapproval to the Saudi Crown Prince’s visit over his alleged involvement in the murder of Washington Post columnist and Saudi critic Jamal Khashoggi at the kingdom’s consulate in Istanbul last month.

Therefore, The Kingdom’s heir will be visiting Egypt for two days, Monday and Tuesday.

The foreign tour, which also included the UAE, Bahrain, and Argentina, is Bin Salman’s first one since the murder of Khashoggi, which put the kingdom recently under fire.

Bin Salman is scheduled to meet with Egyptian president Abdel Fattah Al-Sisi. They will address enhancing bilateral cooperation in economic and investment areas, political issues of common interest, as well as recent updates in the Middle East region.

In Argentina, Bin Salman will attend the G20 summit, and will most likely meet with US President Donald Trump and Turkish President Recep Tayyip Erdogan.

Bin Salman’s first visit to Cairo, since becoming the heir apparent last year, was in March this year. His call was very fulfilling as he met Al-Sisi and Pope Tawadros II of Alexandria at St Mark’s Cathedral in Cairo. He also attended a performance at the Cairo Opera House.

During the March visit, the 32-year-old heir and Al-Sisi set up a $10bn joint fund to develop the planned Saudi investment project, NEOM, in Egypt’s southern Sinai Peninsula. Egypt committed over 1,000 sqm in South Sinai to be included within the project.

Egypt is supposed to focus on developing the existing resorts in Sharm El-Sheikh and Hurghada, while the kingdom plans to build seven cities and tourism projects, and provide funding for the Egyptian project NEOM, Reuters cited Saudi officials last March.

Egypt and Saudi Arabia have strengthened their relations in recent years on political, economic, trade, and investments levels. Daily News Egypt exclusively received a document from the General Authority for Investment and Free Zones upon request, showing that the number of Saudi firms in Egypt, are 4,920 companies, offering 123,269 job opportunities, while Saudi investments are worth about $6.292bn, covering the period from early 1970 till the end of July 2018.

On the military level, the two countries also enhanced their military cooperation in order to counter challenges and threats facing them including combating terrorism.

The Egyptian and Saudi armed forces carried out several military drills in the past years including Tabuk 4 in October 2018 in southern Egypt, the Gulf Shield1 in March 2018 in Saudi Arabia, and the Faisal air military drills in 2017, and the Morgan joint naval exercise in 2013.

Opinion: Why the Saudi business conference should be left to wither in the sun