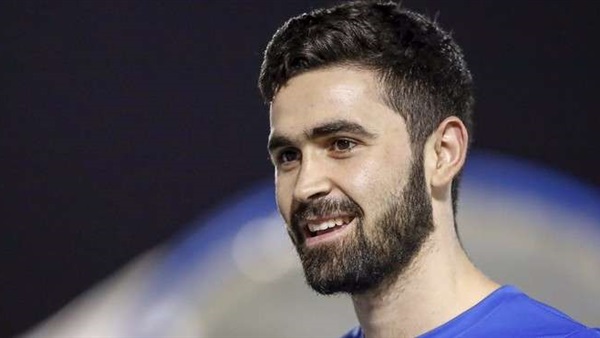 Pyramids FC announced on Saturday reaching a six-month loan deal with Syrian striker Omar Kharbin coming from the Saudi side Al-Hilal, starting this January with the option of purchase by the end of the season.

Pyramids, formerly known as Al-Assiouty Sport, made some record signings in the summer after being taken over by the Saudi investor Turki Al-Sheikh, who is the head of Saudi Arabia’s General Sports Authority (GSA). Kharbin, who made his international debut in 2012, was a key element in Syria’s campaign at the 2018 World Cup qualifiers, scoring 10 goals in 17 appearances.

Pyramids are currently second of the Egyptian Premier League table with 12 points from six matches, one point behind leaders Zamalek.

Despite the remarkable career of Kharbin in the Saudi league, the Syrian player brings to mind the disappointing experiences of his nationals in the Egyptian league last season.

Kharbin will be the 12th Syrian footballer to play with different Egyptian clubs, and the second in Pyramids FC after defender Omar Al Midani. The Egyptian Football Association (EFA) passed a series of new laws in August 2017, including a rule that allows each team to register up to two Palestinian/Syrian players as domestic players.

The Syrian left-back Moayad Al Ajan joined Zamalek SC last season on two seasons-long loan deal from Syrian side Al-Wahda. He scored twice in 16 appearances with Zamalek, before he left during the last summer transfer window. He currently plays for Al-Jazeera in the Jordan Premier League, the top division in Jordan.

Zamalek signed Syrian Alaa Al Shbli on a three-year deal in 2017. The 27-year-old joined the Whites on a free transfer after his deal at Iraqi side Naft Al-Wasat expired. Al Shbli did not participate with Zamalek in any formal game, before they terminated his contract with mutual consent in January.

Al-Ahly SC signed a three-year deal with Syrian defender Abdallah El-Shamy from Lebanese side Safa SC during the 2017 summer transfer window. The 24 year-old joined Al-Ahly during the summer but failed to make any official appearance for the Cairo giants, managing to play just once during the dying minutes of their friendly game against Atletico Madrid. In January, Al-Masry SC announced the signing of El-Shamy on a free transfer with an 18 months long contract, just a couple of days after he was released by the Red Devils. He played only two games with Al-Masry before he left the club.

Smouha SC signed two contracts with Syrian duo Muayad Al Khouli and Nasouh Al Nakdali during the last summer transfer window, though the club terminated the deals only four days later, after it found that both players were still linked with their previous clubs, which demanded 30% of the value of the new contracts with Smouha. The Egyptian side rejected the demand and cancelled the players’ deals.

El Ittihad El Iskandary SC signed a three-year deal with Syrian left-back Ahmed Samir Berish during the 2017 summer transfer window. Berish make only one appearance with the Egyptian club and scored no gaols. He left the team in January.

El Dakhleya FC signed two seasons deal with Syrian Mohamad Mido from El Entag El Harby SC during the summer transfer window, after financial disputes with his previous team. Mido did not make any appearances with El Dakhleya, therefore he decided to cancel his contract after a few months.

Syrian defender Rabea Abdullah joined Raja CA on a free transfer move for two seasons, coming from Syrian side Al-Karamah SC. He made no appearance with Raja, whereby he left the team.

El Entag El Harby SC signed the Syrian duo Mohamed Hamed and Ali Shabib last season, but it soon terminated their contracts before they make any appearance with the team.

Omar Al Midani currently plays as a centre-back for Pyramids SC. Al Midani joined the Egyptian side during the last summer transfer window, from Dubai’s Hatta SC, but the player has not make any appearances so far.

Stories of buying companies’ clubs, from Dina Farms to Pyramids