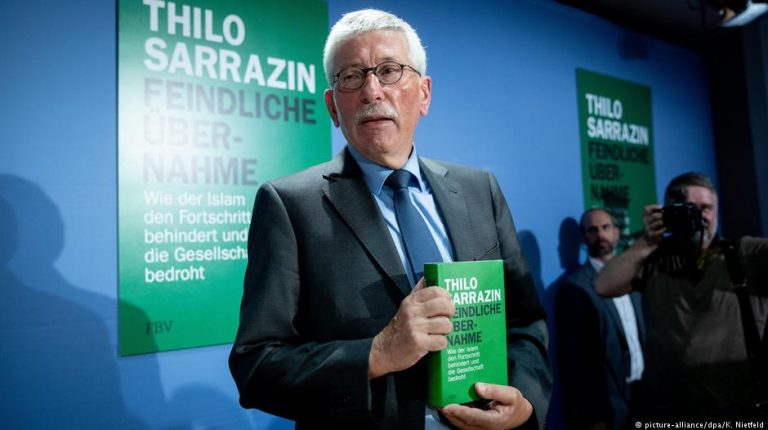 His publishers see things differently, describing it as a work that draws parallels between statements from the Quran and the Muslim mentality, using the arguments to explain the peculiarities and problems of Muslim states and societies as well as the attitudes and behavior of Muslims who immigrated to the western countries.

Another expert summarizes the book this way: “In an overwhelming pretense of objectivity, he justifies why the bogeyman he had already described in Deutschland schafft sich ab (Germany Abolishes Itself) can only be attributed to Islam,” writes a Freiburg University Islamic Studies professor, Johanna Pink, in her review for the weekly Die Zeit.

Germany Abolishes Itself is the book that made Sarrazin one of Germany’s most successful writers of non-fiction. His new book, Hostile Takeover, is being published eight years later to the day.

Germany Abolishes Itself topped the German best-seller list for 21 weeks straight — in part because it was so controversial. The author’s thoughts on immigration, criticism of Islam and how intelligence is inherited had many people up in arms, and triggered widespread debate.

Eight years later, Sarrazin’s new book hits the book shelves at a time when the right-wing populist Alternative for Germany (AfD) party has seats in parliament and the unfolding events in the eastern German city of Chemnitz, where a far-right mob marched presenting the Nazi salute and hunting down people they felt looked like foreigners.

“Sarrazin will polarize,” writes Die Welt. “Some will see the book as a revelation, others will see it as a sedition cloaked by science.”

There has already been praise for Sarrazin in Junge Freiheit, a newspaper German political scientist Gideon Botsch has labeled the “mouthpiece of a radical nationalist opposition.” Thorsten Hinz brands politicians and the media as clueless as to how to deal with Sarrazin: “His assumptions are well known and popular, but officially they are always stigmatized and fended off, which marks them as a ‘no-go area’ for ordinary citizens.”

Traditional German print media in fact largely eye Sarrazin and the contents of his new book with suspicion and disdain.

Criticism: An economist posing as a scholar on Islam

Writing in the Süddeutsche Zeitung, Sonja Zekri says that although Sarrazin professes to have read the Quran, he doesn’t take into account the context of its origin. Sarrazin “argues that he recognizes the true character of the Quran, exposing it as an ‘aggressive, disorderly, emotional and not very abstract text.'”

Thilo Sarrazin is not an Islamic scholar. The economist, born in Gera in 1945, worked in a leading position at Deutsche Bahn and later as finance senator in Berlin for the center-left SPD party. Because of his controversial theses, he lost his post as a board member of the Bundesbank in 2010.

Criticism: A book filled with mistakes

Sarrazin is accused of a number of factual errors by various media outlets. The Süddeutsche Zeitung, for example, counters that it is not true that all Muslims are forbidden to marry unbelievers, as Sarrazin claims. Moreover, genital mutilation and slavery are not crimes exclusive to Muslim communities.

Die Zeit writes that the book is so full of mistakes that it was “hopeless” to exhaustively list even all serious inconsistencies. Although Sarrazin employs quotes as well as historical, political and demographic information in his book, “whether all this information is accurate, or only slightly accurate or only understood that way if taken out of context, or perhaps not at all, seems to be secondary.”

In a conversation published by Stern magazine, Thilo Sarrazin is confronted by journalist Arno Luik about errors found in his book. For example, Luik asked Sarrazin about a quote in his book from a report that a newspaper later retracted. Sarrazin did not contradict the interviewer, but instead of admitting he was spreading “fake news,” he said that he suspects that behind-closed-doors interference might have led to the recall of the message, and that it was still true.

Germany’s best-selling tabloid newspaper, Bild, writes that Sarrazin makes inappropriate generalizations when he writes that the “honor of the Muslim man” is found “between women’s legs” or when he claims that Muslims generally have a tendency to be quickly offended.

The weekly newspaper Der Freitag reproaches Sarrazin’s black-and-white categorizations, comparing his approach to the one used by German Islamist Pierre Vogel. Just like Islamists, Sarrazin “takes individual verses of the Quran out of context, picking the ones he needs like out of a toolbox.”

Die Zeit sharply criticizes Sarrazin’s claim that Islam never developed an “independent Islamic building culture” and that the separation of the sexes as advised in Islam would lead to the arts suffering from “additional desertification.” The Zeit author wonders if Sarrazin has ever heard of the Alhambra: “Sarrazin knows as little about the rich tradition of Arabic poetry as he does about the flourishing Egyptian popular music scene, and he does not want to know anything about it.”

Likewise, the Süddeutsche Zeitung writes: “If you could impose a lifelong ban on entry to the Alhambra for such nonsense, it would have been more than earned.”

Criticism: A half-hearted defense of women

The reviewers, however, do not completely reject all of Sarrazin’s theses. For example, Die Zeit writes that Sarrazin is right in claiming that the legal and social situation of women in Muslim-majority countries is precarious. “However, one wonders how serious an author is about women’s rights, when he says he values the exploitation of textile workers in Bangladesh just because it lowers the net reproductive rate.”

While the Süddeutsche Zeitung allows Sarrazin to profess his commitment to women, they are suspicious of what they see as speaking out of both sides of his mouth. “As much as he is against the subjugation of the Muslim woman, he is equally as suspect of her as a mother of new little Muslims.”

The fact that his previous publisher, the German Publishing House (DVA), refused to print Sarrazin’s new book caused a stir in Germany in the run-up to its publication. His former publisher, Thomas Rathnow, who also sits on the management board of Random House, which owns DVA, told the weekly newspaper Die Zeit that in the book, Sarrazin painted a picture of Islam that “equals a scourge of humanity.” The book, whose German title translates to “hostile takeover” is “an argumentatively weak book” and “could reinforce anti-Muslim sentiments.”

Instead, a publisher of financial books, Finanzbuch Verlag, has brought out Sarrazin’s book. According to the publisher, an initial print run of 120,000 copies is planned.

Among other things, the publisher’s list includes a series by the right-wing populist journalist Roland Tichy.

Even before the publication of Hostile Takeover, it already ranked number one on Germany’s Amazon’s best- sellers’ list. The media hype surrounding the book has certainly contributed to this.

But the mistakes made in the book nor Sarrazin’s characteristic style are not the most problematic thing about the book’s publication, according to the Süddeutsche Zeitung. Most painful, it writes, is that “in addition to racists and far-right people buying the book, there will be others who have honest questions about Islam, some who do not understand it and perhaps fear it and they will find within this book the worst of all answers.”

What does the author say to all that?

At the presentation of his book in Berlin on Thursday, Sarrazin stated that he could not help that right-wing populists and right-wing extremists relied on his theses.

The articles published in many well-known newspapers do not quickly absolve Sarrazin of his responsibility.

The Süddeutsche Zeitung sees negative consequences for social cohesion in Germany. Sarrazin writes that he fears that “Islam will gradual overwhelm the population demographically,” insisting that “we in Germany and Europe have the right, even the duty” to “anticipate this threat.”

Torsten Krauel writes in Die Welt, for example, that “The book suggests: It is too late. Sarrazin’s true lesson can be summed up in one sentence: The Muslims are our disaster. Is the expulsion of all Muslims from Europe the solution? Thilo Sarrazin would dispute that, but one senses the direction things could take when the thesis that integration is futile because of the Quran is taken seriously.”