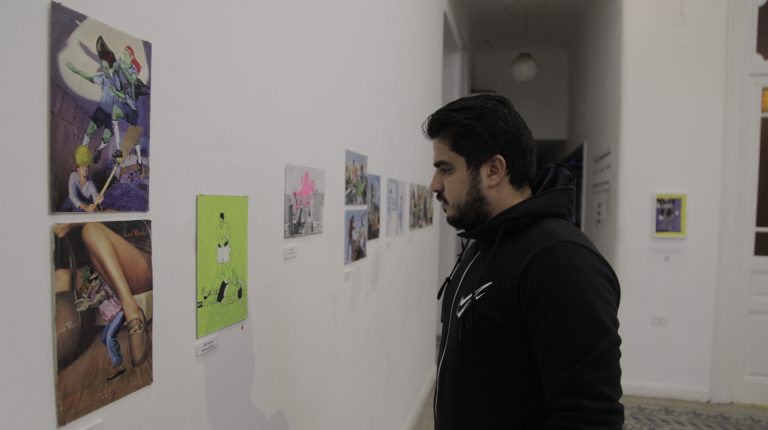 The fourth edition of “Naema’s Office Is Bleeding” exhibition concluded on 20 January. Over 12 days, the exhibition showcased the abundant production of artworks created by the participants.

Three intensive workshops of experimentation with painting and collages, which took place in December 2021 at Medrar, were led by esteemed artist Hany Rashed and co-facilitated by Mona Essam Eddin.

The workshops included around 70 participants from different backgrounds, fields, and ages in the explorative process of the creative potential of collages and painting.

Encompassing aspiring creative artists to emerging and mid-career artists, the creations draw from a diverse set of traditional and contemporary sources such as photography, paintings, drawings, magazines, and internet imagery.

The participants had the opportunity to share their experiences and feedback with their peers and engage in discussions related to the local and international contemporary art scene, curation, and artistic creation with the invited visitors and guest speakers.

Rashed is a self-taught artist who worked closely with renowned artist Mohamed Abla, who became his mentor. He is considered to be one of Egypt’s most prominent and prolific contemporary visual artists; Rashed tackles and utilises pop culture in a way that breaks down barriers.

His work has been featured all around Europe and Egypt, so it makes sense that all his students admire him.

Staggering numbers applied to be part of the workshop this year, so much that Medrar management decided to host three different sessions.