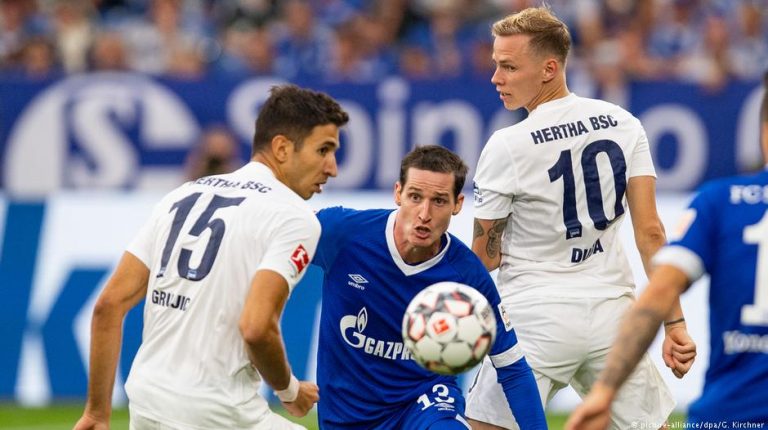 A callow defeat against a plucky Hertha Berlin side ensured Domenico Tedesco’s side maintained their winless start to the Bundesliga campaign. Defeat leaves Schalke pointless and lying in 15th place after Matchday 2.Schalke 0-2 Hertha Berlin
(Duda 15′, 90’+6)

A penny for the thoughts of Domenico Tedesco. With the champagne having barely dried from last season’s Champions League qualifying campaign, his methods are already being called into question this time around.

Two games without a win, at the beginning of a season in which there is so much to play for, hardly qualifies as a crisis, but Schalke need to arrest their form quickly if they are to keep pace with their rivals.

Defeat seemed an inevitability from the moment Daniel Caliguiri fluffed his lines from the penalty spot in the 13th minute. Marko Grujic’s frankly idiotic decision to raise his hand unnaturally in his own penalty area gifted Schalke a much-needed opportunity for a perfect start when the ball struck his arm. The home side failed to take advantage. Caliguiri’s was the worst kind of penalty miss, his shot dragged completely wide of the target, sending the away fans into raptures.

Hertha took a lead moments later through Ondrej Duda. The Slovakian midfielder latched-on to a fizzing Dolruson pass in the 15th minute before unleashing a powerful drive beyond Rune Jarstein from the edge of the area. It was sucker-punch from a side who sensed weakness in the home side’s ranks.

From then on, the visitors simply sat back and absorbed the pressure. There may not be much to admire about Hertha’s playing style, but they’re tireless workers and Schalke simply couldn’t break them down. Despite having three times as many shots, they only had one more on target, once again highlighting a concerning lack of cutting edge in the final third.

No player encapsulated that more so than Mark Uth. The German was such a reliable performer in front of goal for Hoffenheim last season, but was guilty of squandering several gilt-edged opportunities, here.

One particularly generous opportunity, coming deep into extra time, should have seen the net bulge. After finding room to wiggle away from his marker in a crowded penalty area, Uth unleashed a shot on the half turn. It was too close to Ralph Fährmann however, with the goalkeeper pulling off an excellent save to keep his side in front.

As the clock ticked down, Schalke threw men forward desperately. It backfired, as Dennis Jastrzembski was found by a clever pass with room to run behind the Schalke defence. As he sprinted towards Jarstein’s goal, he was brought down in cynical-style by Yevhen Konoplyanka, who received his marching orders. Duda curled a sublime freekick into the top corner, handing Hertha their first win at this ground since 2004.

There is a case to be made for the loss of Tedesco’s first choice central midfield pairing from last season. Max Meyer joined Crystal Palace this summer while Leon Goretzka headed south for Bayern Munich. This Schalke team was still, on paper at least, the vastly superior side, however, and Tedesco will be concerned with how much his side labored against limited opposition.