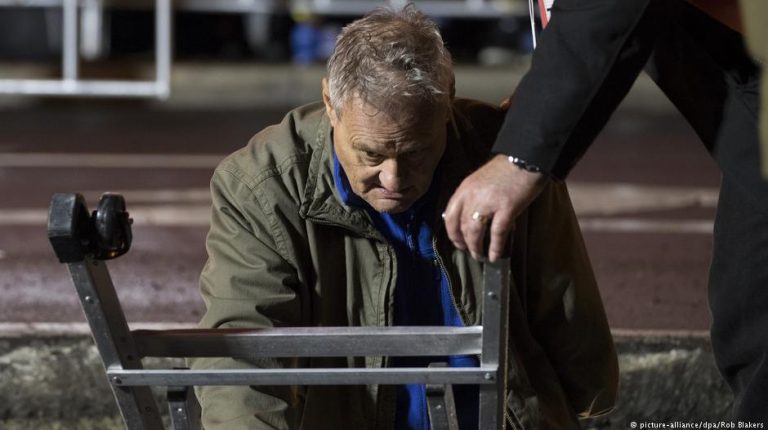 He had been buried in a steel container under a busy road for 72 hours as part of Tasmania state’s annual Dark Mofo festival, which celebrates darkness through large-scale public art, food, film and music.

“The anxiety of the artist’s disappearance is the point of the piece,” organizers explained.

Parr’s performance was an attempt to highlight “the shadow cast by the genocidal violence of 19th century British colonialism in Australia,” organizers said. The Aboriginal population in the state of Tasmania was nearly totally destroyed during that period.

Used to being shocking

“He is an endurance performance artist and he’s been doing this for many years, so his body is quite used to (it),” Dark Mofo curator Jarrod Rawlins told reporters.

Heavy machinery carefully removed the asphalt that had sealed Parr into the mini-shipping container on Thursday.

Oxygen was pumped into the container during the three-day period. Parr had access to water, reading and writing material, a heater and a distress button in case anything went wrong. He had a small light with him, but no food. A bucket was provided for sanitary use.

Some spectators found the feat thought-provoking, while others were baffled by it.

“People work a lifetime underground. This goose spends three days in a box doing frig all, calls it art and it makes the news,” an unimpressed commentator, Rodney Gibbison, wrote on Facebook.

Parr has frequently given controversial performances, including one in which he used an ax to hack off his prosthetic arm, which he had filled with minced meat and blood.

The Dark Mofo Festival, produced by Hobart’s Museum of Old and New Art, has sparked other controversy as well, with some Christians upset over inverted crosses being erected on the city’s waterfront.

Other artists billed on the festival program include American musician, filmmaker and all-around maverick Laurie Anderson.