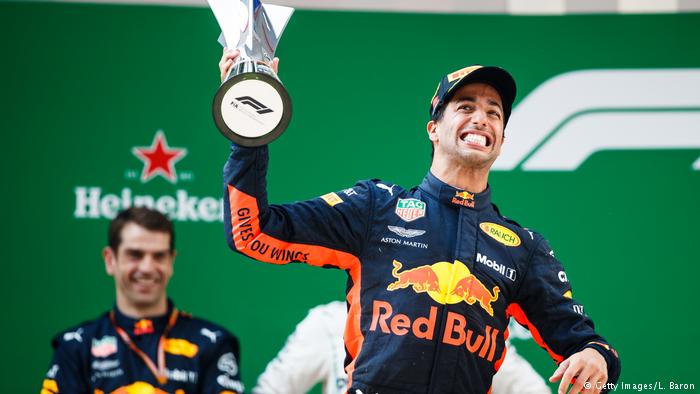 Daniel Ricciardo, who started sixth on the grid, drove a sensational race to pick up his first win of the season in Shanghai. Sebastian Vettel finished eighth after colliding with Max Verstappen on a hairpin turn.Australian Daniel Ricciardo picked up the sixth race victory of his career in Shanghai, winning Sunday’s Chinese Grand Prix despite starting in the third row.

The Red Bull driver took advantage when the safety car came out on lap 31 (of 56), heading to the box a second time to get some fresh tires. He moved quickly up the field after the change, taking the lead away from Mercedes driver Valtteri Bottas on lap 44.

“I don’t seem to win the boring races,” Ricciardo said after the victory. “That was unexpected. Yesterday (in qualifying) we thought we might be starting from the back of the grid.”

Bottas held off a late charge from Kimi Raikkonen to finish second, and the Ferrari driver completed the podium in third.

Trouble in the hairpin

Turn three in the Shanghai circuit — a tight hairpin — was the site of two crashes during the race. Ferrari’s Sebastian Vettel, the leader in the drivers’ championship, was a victim in one of them.

Red Bull’s Max Verstappen, trying to break into the top three, attempted to pass Vettel in the hairpin, but the two collided and spun off the track. The safety car didn’t come out this time, but the Dutch driver picked up a 10-second penalty for the incident.

Thirteen laps earlier, Toro Rosso driver Pierre Gasly collided with teammate Brendon Hartley. The crash left debris on the track, causing the safety car to come out. Gasly received a 10-second time penalty for the incident, and Hartley eventually had to retire after having trouble with his car.

“It was a s— race. I already spoke with [Vettel] and told him it was my fault,” Verstappen told RTL after the race.

Vettel, who started atop the grid after securing pole in qualifying, finished in eighth. The German still leads the drivers’ championship standings after three races thanks to victories in Australia and Bahrain.

Defending drivers’ champion Lewis Hamilton finished fourth in Shanghai and is now nine points behind Vettel in second place. Meanwhile, Ricciardo’s race win bumps him up to fourth place in the standings.

Lap 54/56 — Valtteri Bottas is struggling with his grip as Kimi Raikkonen closes in. Max Verstappen is close behind the two, but has a 10-second penalty hanging over his head.

Lap 53/56 — Toro Rosso’s Brendon Hartley retires at the instruction of his team. He was in the collision with teammate Pierre Gasly earlier in the race.

Lap 52/56 — Kimi Raikkonen now putting real pressure on Valtteri Bottas for second place. The two are five and a half seconds behind Daniel Ricciardo.

Lap 50/56 — Battle of the Fins! Mercedes’ Valtteri Bottas is now trying to hold off Ferrari’s Kimi Raikkonen in second place.

Lap 48/56 — Daniel Ricciardo opens up a four-second lead over the field. Turns out it was smart for him to pit while the safety car was on the track!

Lap 45/56 — Kimi Raikkonen is now up to third place after the crash. Lewis Hamilton, who dodged the accident, is up to fourth.

Lap 44/56 — Daniel Ricciardo is now up to second place after passing Sebastian Vettel. He’s 1.5 seconds behind the leader Valtteri Bottas.

Lap 41/56 — What a pass! Daniel Riccardo now up to third after a terrific pass of Lewis Hamilton in turn three! Vettel is now in Ricciardo’s sights. “The next one’s Vettel, let’s get him,” Riccardio says.

Lap 39/56 — Lewis Hamilton blocks Max Verstappen as the Red Bull driver tries to pass on turn four. Verstappen drives off the track, and his teammate Daniel Ricciardo passes him as he gets back onto the track.

Lap 39/56 — Daniel Ricciardo is now in the top five after passing Kimi Raikkonen.

Lap 37/56 — Valtteri Bottas opens up a 1.7 second lead on Sebastian Vettel. Both cars have only pitted once.

Lap 36/56 — Lewis Hamilton takes advantage of the restart, moving up to third place.

Lap 35/56 — All green again as the safety car comes off the track. back underway!

Lap 32/56 — Red Bull’s Max Verstappen and Daniel Ricciardo take advantage of the safety car and go to the box a second time, as do the Renaults and Force Indias.

Lap 31/56 — Yellow flag in the hairpin as the two Toro Rosso drivers collide. Brendon Hartley is the one who suffers the most, dropping back to 18th place. Pierre Gasly tried a late move, then said Hartley “closed the door.” Hartley says over the radio: “I definitely have a problem.” The debris from the collision prompts the safety car.

Lap 29/56 — Charles Leclerc spins out on turn one, but is able to get back on the track without much damage to his car. He declares the care “impossible to drive.”

Lap 28/56 — Kimi Raikkonen finally pits and falls out of the top five. The battle for the lead is now between Valtteri Bottas and Sebastian Vettel.

Lap 27/56 — Valtteri Bottas is now in first place after overtaking Kimi Raikkonen. Vettel follows suit, and Raikkonen is down to third.

Lap 23/56 — Valtteri Bottas is gaining ground on Kimi Raikkonen in first place — now less than five seconds behind. Raikkonen has yet to pit.

Lap 22/56 — “You need to stay in front of Vettel.” Valtteri Bottas gets his marching orders from his Mercedes team.

Lap 21/56 — Kimi Raikkonen now leads after Sebastian Vettel pits. Vettel isn’t able to get ahead of Valtteri Bottas out of the pits and is now in third.

Lap 19/56 — Lewis Hamilton pits. He’s having trouble keeping up with Ferrari’s Kimi Raikkonen, who is now in the top three.

Lap 13/56 — Sebastian Vettel’s lead is now up to three seconds after a few slow laps from Valtteri Bottas in the Mercedes.

Lap 12/56 — “I’m starting to lose pace guys. Kimi is quite aggressive,” said Lewis Hamilton on his radio. He has been battling with Kimi Raikkonen for fourth place.

Lap 11/56 — Brendon Hartley is the first on in the box, switching out his supersoft tires.

Lap 9/56 — Lance Stroll is now dropping back in the field after losing out to Force India’s Esteban Ocon. He’s down to 13th and is feeling the pressure from Sergio Perez and Stoffel Vandoorne.

Lap 4/56 — Vettel has a two and a half second lead over Vaterri Bottas. Max Verstappen sits third, and Kimi Raikkonen and Lewis Hamilton round out the top five.

Lap 2/56 — Williams driver Lance Stroll had the best start on the day, moving up to 12th after starting 18th in the grid.

— Drivers are doing their formation lap. It’s 19 degrees Celsius (66 Fahrenheit) and the track temperature is 39 degrees.

— Here is what the grid looks like this afternoon after Saturday’s qualifying.

— Will Sebastian Vettel go three-for-three to start the season? The German Ferrari driver picked up wins in Australia and Bahrain and earned the pole this week in Shanghai.