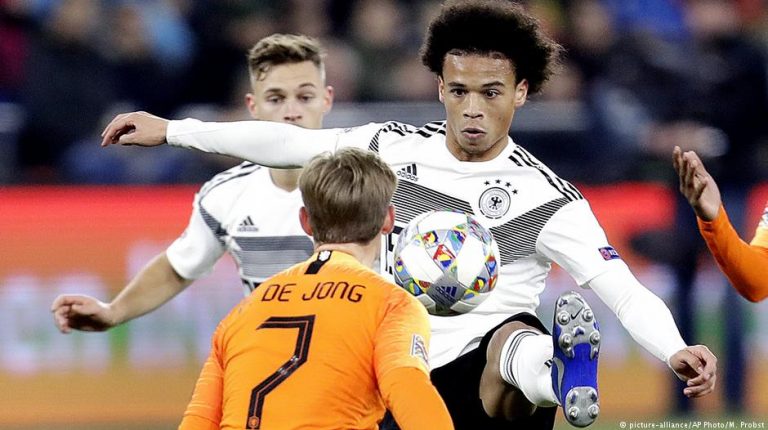 After struggling against the Netherlands in the Nations League, Germany will get a swift chance for revenge after the rivals were drawn together in Euro 2020 qualifying. Coach Joachim Löw is confident of progression.After the draw was made in Dublin on Sunday, Germany team manager Oliver Bierhoff said the chance to avenge their 3-0 defeat and a 2-2 draw snatched from the jaws of victory was very much on German minds.

"We are happy that we have the chance of revenge against Holland," said the former international striker.

Germany have plummeted from first to 16th in the FIFA world rankings since June and their Nations League relegation meant they were seeded second. The other sides in group C are Northern Ireland, Estonia and Belarus.

"We know our journey back to the top of the world rankings means we will meet some tough opponents on the way," added Bierhoff. "That's the only way to distinguish yourself and it [the draw] could have been worse for us."

The Nations League campaign saw Joachim Löw start to move on to a younger generation of players, with Leroy Sane, Serge Gnabry and Kai Havertz all impressing in recent matches. The Germany boss seemed relaxed about his side claiming one of two qualifying spots.

"It's a reasonable group, we know our own strengths and will be confident, but we don't want to be presumptuous. The Dutch and the Germans are the favourites and are the ones who should normally qualify."

After a shocking 2018, where Germany lost six games in a calendar year for the first time, Löw says his goals for 2019 are simply "qualifying [for Euro 2020] and giving the young players space, so they can develop and take on more responsibilities".

The qualifiers begin in March 2019.