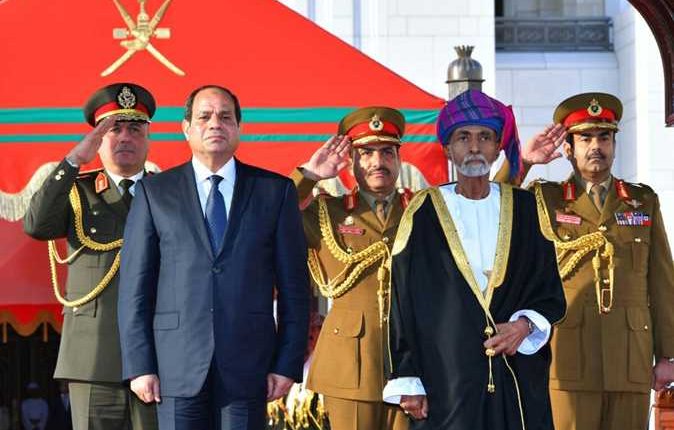 A few commentaries addressed recent local issues such as concerns surrounding spoiled poultry being sold or an ongoing debate on freedom of creativity, but the main focus remains on the activities of President Abdel Fattah Al-Sisi and his critics amid talk on the presidential election.

“With Al-Sisi as a leader, Arabs and the world saw that in Egypt nothing else but his orders are to be implemented,” wrote Al-Akhbar’s Editor-in-chief Khaled Miry, arguing that this is the reason the country is able to lead the region and that it presents a model of “politics that is not ambushed by conspiracies.” The front page op-ed aimed to praise the president’s visits to Oman and the UAE.

As usual on such occasions, the newspaper’s Chairperson Yasser Rizk dedicated a full page article to Al-Sisi’s visit to Oman, mostly a redundant description of the formalities and a recap on the meetings, putting upfront the idea of continuous cooperation between the two countries and remembering Oman’s support for the 30 June events.

“Who are the powers of evil?” was the headline of another piece in the newspaper by Karam Gabr, head of the National Press Authority. The expression has often been used by Al-Sisi to describe opponents or perpetrators of terror attacks. According to Gabr, they are those who want to destroy the state and its economy and spread sectarianism. They are the Muslim Brotherhood who is trying to fool politicians, activists, and the media, he said.

In state-run daily Al-Ahram, legal and constitutional expert Shawki Al-Sayed picked on foreign media coverage of the election, namely Reuters, the Associated Press, and The New York Times, over claims of a “farce” election.

In Al-Masry Al-Youm, Mona Makram Ebeid, former member of parliament and political science professor, insisted on the importance of building political life based on political parties and plurality ahead of the 2022 election.

In the newspaper, the spoiler of diplomatic relations with Oman did not go unnoticed. Both Al-Masry’s Chairperson Mohamed Amin and writer Abdel Nasser Salama slammed Egyptian TV host Amani Al-Khayat over statements considered offensive by the Omanis, including that it was “a small emirate” and references to historical mistakes.

In the privately-owned Al-Watan newspaper, Ahmed Tahry described opponents of Al-Sisi as those with “dirty tasks to fulfill.” Although he did not name any, he particularly criticised those who either announced or thought about bidding for the presidency.

Al-Sisi heads to Oman for bilateral discussions with Sultan Qaboos