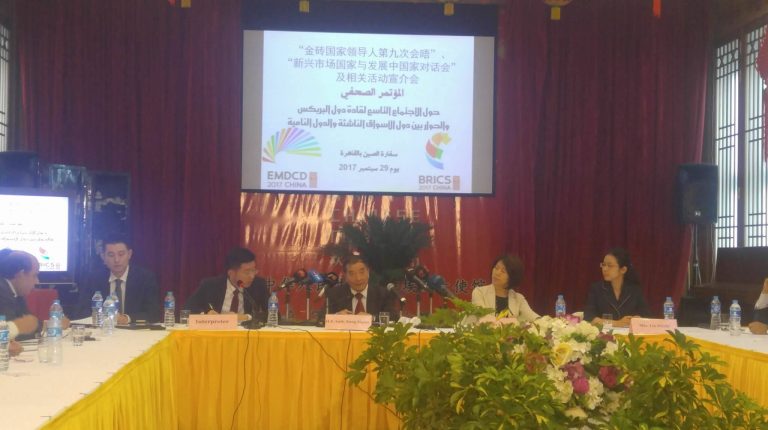 President Abdel Fattah Al-Sisi will visit China to attend the 9th annual BRICS Summit, in response to the invitation of Chinese President Xi Jinping to attend the summit in Beijing.

The summit will be held between 3-5 September and will discuss the emerging markets and the economies of the developing countries.
Chinese ambassador to Egypt Song Aiguo said Tuesday in a press conference that President Al-Sisi will deliver a speech at the Forum of Industry and Trade of at the BRICS.
Aiguo added in a press conference held Tuesday that the presence of Al-Sisi will give Egypt the opportunity to present its projects and plans to the international community. This, in turn, will contribute to attracting foreign investment to Egypt in the coming period, he added.

Aiguo noted that, on the sidelines of the summit, the two presidents will sign several commercial, trade, and political agreements.

The ambassador explained that Egypt has one of the highest population growth in the Arab world. This is in addition to the country being located in the western point of Belt and Road Initiative.

“Egypt has a good infrastructure and transport network, along with trade agreements with many countries and economic blocs, which will allow for the growth of the economy in the coming period,” he said. “There are negotiations with the Egyptian side to launch new projects in the New administrative Capital project and Ain Sokhna.”

The ambassador pointed out that the Chinese companies have completed the first phase of the renovation of the electricity grid in Egypt, adding that the second phase is proceeding well.

He said that the project is the first to be implemented with Chinese loans after the visit of the Chinese president to Egypt.

Furthermore, Chinese investments in Egypt is in an ongoing increase, as it reached $6.8bn in 2016.

The ambassador expected an increases in the volume of trade exchange between the two countries by the end of the year, especially as China intends to increase its imports from Egypt.

This comes as Al-Sisi spoke on Tuesday to Chinese media, expressing his welcoming of China’s invitation to the summit.

The president met on Monday with his ministers, intelligence chief, and head of the Suez Canal Authority to where they presented their reports on current projects with China in preparation for his visit.

Al-Sisi will head to Vietnam after his visit to China, a presidential report said on Monday, saying it would be the first visit of its kind by an Egyptian president.

Will OECD countries continue to abandon free market in face of Chinese threat?

Ahead of G20 Summit, west abandons free market in face of Chinese threat

The cracks in the BRICS