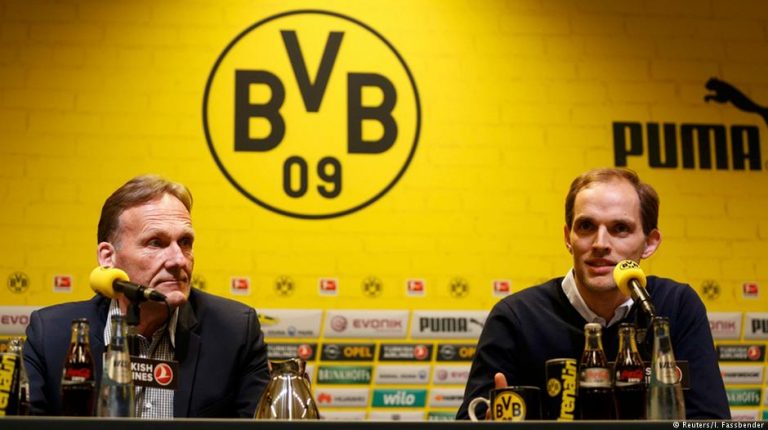 The disconnect between Thomas Tuchel and Dortmund CEO Hans-Joachmim Watzke may have made the coach’s departure inevitable. However, it would be better for both sides if they could patch things up, writes Matt Ford.When the final whistle blew on a balmy evening in Berlin, the jubilant Borussia Dortmund players danced and sang in front of their ecstatic supporters. But Thomas Tuchel wasn’t among them. Unlike his predecessor, the Dortmund coach rarely approaches the fans – whether at home, or away, which on this night meant Berlin’s Olympic Stadium.

While his predecessor, the emotional Jürgen Klopp, was more than happy to soak up the adulation and engage directly with the fans. Tuchel leaves that to his players, preferring instead to retire to the dressing room, already dissecting the performance of his team. This doesn’t go down well with some supporters. Compared to Klopp, many find Tuchel cold, distant, calculating and robotic.

It is this personality trait that has also caused so much friction between Tuchel and both his players and the club’s hierarchy that has made a parting of the ways appear inevitable, despite the club having won its first serious silverware since 2012.

A perfectionist with a clear idea of how his team should play, Tuchel is easily frustrated when his players don’t quite meet his expectations. Following a 2-1 Bundesliga defeat to Eintracht Frankfurtin November, he raged against his team, calling them “entirely deficient” – while some reports in the German media suggested that some players had difficulty following their coach’s complex instructions.

Even in the German Cup final, Tuchel appeared insensitive in his decision-making, omitting Nuri Sahin not just from the starting 11 but from the entire matchday squad – a strange decision given that the Turkish international appeared to be the logical replacement for the injured Julian Weigl. Tuchel justified his decision by saying that Matthias Ginter, a center back, would be better equipped to deal with Frankfurt’s physical long-ball game, but captain Marcel Schmelzer’s comments revealed a lack of support from the dressing room.

“[The decision to drop Sahin] came as a shock,” he said after the final. “I don’t get it. With Julian out, Nuri is the next best option so I was surprised that he wasn’t even the squad. We all know what qualities he has and we all stand by him.”

While Tuchel appears to have support among some of the younger new arrivals (Ousmane Dembele has publically stated his gratitude and symbolically handed Tuchel the cup in Berlin), the influential older players from Klopp’s era seem to have taken issue with Tuchel’s more scientific, possession-based football and his rather dour personality.

Decisions on tactics and personnel are Tuchel’s prerogative as coach, but as a leader and manager his personal skills have rightfully been called into question. Nevertheless, football is about results and, despite the personal differences, Thomas Tuchel has delivered success this season in extraordinarily difficult circumstances.

After the sales of Henrikh Mkhitaryan, Ilkay Gündogan and Mats Hummels, he was forced to rebuild with an unprecedented eight new signings – many young and inexperienced, new to German football and unable to speak the language – along with as others he didn’t necessarily want. The return of Mario Götze from Bayern Munich in particular seems to have been driven by CEO Hans-Joachim Watzke rather than Tuchel.

There were distractions off the pitch as well, with the German football association (DFB) ordering the closure for one game of the Südtribüne (south stand) following attacks on the visiting fans of the unpopular, Red Bull-backed newcomers RasenBallSport Leipzig in February.

On the pitch, as the players got used to each other, their coach and his philosophy, setbacks were to be expected. There were defeats away at RB Leipzig, Bayer Leverkusen, Eintracht Frankfurt and Darmstadt and a fortunate 3-3 draw away at Ingolstadt. But at home, Dortmund have never lost a Bundesliga match under Tuchel and beat both teams that finished above them in the standings.

In the Champions League, they twice went toe-to-toe with title holders Real Madrid and we’ll never know how far they could have gone were it not for the attack on their bus that left defender Marc Bartra injured and the team in shock. However, the fact that the tie against Monaco was billed as a meeting of Europe’s two most exciting young sides is testament to Tuchel’s work in building a team that has produced some outstanding attacking performances.

The bus attack was the catalyst for a deepening of the rift between Tuchel and his superiors, with the coach criticizing UEFA – and so, by association, Watzke – for re-arranging the match less than 24 hours after the incident. Having been criticized for his lack of empathy in his dealings with his players, the aftermath of the bus attack painted Tuchel in a more positive light – the caring father figure speaking out against the cold, greedy marketing men at UEFA. The robot did have a human side, after all.

Still not too late

In Thomas Tuchel, Borussia Dortmund have an intelligent, young manager who has a clear footballing philosophy. This season, in the most trying of circumstances, he has achieved the club’s aim of direct Champions League qualification and delivered the club’s first significant title in five years – his young team playing some exhilarating football along the way.

Clearly, the personal relationships between Tuchel, his team and his superiors could be better but that can be worked on – from all three sides. Tuchel might not be the charismatic giant that Klopp was – who is? However, he is a modern manager who is meticulous in his work. The bridges may already be burned beyond repair but, given what Dortmund have achieved this season, it would be foolish not to try and solve those personal differences as professionals.