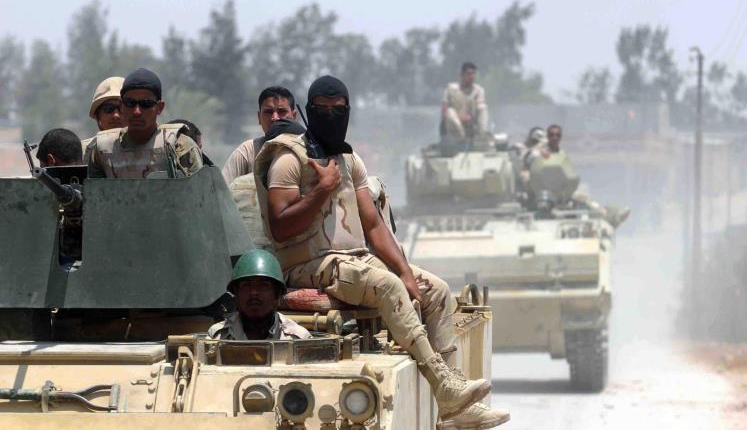 At least 13 people were killed from the tribe of Al-Tarabin, including Salim Abu Lafi, a prominent leader of the tribe, in the recent clashes that occurred in the south of Rafah last week between the Al-Tarabin tribe and the extremist group Sinai Province––previously known as Ansar Beit Al-Maqdis—which joined the Islamic State in 2014, according to tribal sources.

The clash was not the first of its kind. Two years ago, a similar fight broke out in Al-Barth market, which is controlled by the tribe of Al-Tarabin, where militants affiliated to Sinai Province killed a member of the tribe on the pretext that he was working with the Egyptian army.

Al-Tarabin responded by killing a militant and preventing others from passing, closing the market until there was a reconciliation agreement between them and calm returned. Later, clashes broke out after tribal elders announced a war against Sinai Province and called for members of the tribe to take up arms and help Egyptian security forces in the war against the militant group.

In the beginning of May, Al-Tarabin announced the alleged killing of eight militants from Sinai Province in clashes with its members, while two tribesmen were injured. The clash between the two sides came after a woman was killed and her husband and two of her sons were kidnapped from Rafah two weeks ago by militants suspected to be from Sinai Province.

Moreover, on 24 April, Al-Tarabin allegedly burned a militant alive, which was shown in a leaked video. The video showed members of the tribe burning a man believed to be a militant affiliated to Sinai Province.

In return, militants beheaded locals accused of collaborating with the Egyptian armed forces, and they recently stepped up their attacks against the peninsula’s Christian minority, forcing hundreds to flee following a string of killings in Al-Arish in February.

On Monday, another prominent Sinai tribe, Al-Sawarka, declared war on Sinai Province and asserted its support to the Egyptian armed forces in the battle against the militants. Also announced was the formation of a central joint leadership for the tribes in order to coordinate with the armed forces and change the rules of engagement.

“Al-Sawarka was at the forefront of the battle against extremists since the military started the battle; and the first civilian martyrs were from Al-Sawarka,” the tribe said in a statement.

Al-Sawarka announced that it will rely on media mobilisation, which will be run by experts belonging to the tribes, and establishing an official institution to support the families of the ones killed or injured with stable funding.

“The collaboration between the military and tribes is not new, and there is a department in the Egyptian General Intelligence that deals with tribal affairs,” Al-Tarabin spokesperson, Mousa Al-Delh, told Daily News Egypt. “36 tribal leaders had been killed by terrorists after being accused of collaborating with the army,” he added.

Al-Delh added that tribes in North Sinai have been fighting extremists since 2015, but due to the ensuing controversial discussions about arming tribes, Al-Tarabin stopped the fight and “the cooperation was limited to providing the army with information.”

He explained that “the extremist group launches its operations in terrain that is very tricky to maneouvre in, which makes fighting in it very difficult. We [the tribes] know the region very well; it is the place in which we live.”

“We are not alone. There are other tribes fighting alongside Al-Tarabin against the terrorists, such as Al-Sawarka and Al-Remailat,” Al-Delh said.

Rejecting accusations of fighting for their own interests, Al-Delh said, “we are not fighting for personal gain, nor for smuggling. We are officially fighting beside the armed forces.”

When asked about the tribe’s weapons, he refused to talk about the source through which they receive them, but he asserted that arms are only to be used for self–defence and that all forms of weapons will disappear after defeating the terrorists and clearing Sinai from all extremist forms.

A military official, who spoke on condition of anonymity, told Daily News Egypt that tribes are coordinating with the military in the battle against extremists. He further asserted that “the situation [in Sinai] is under control.”

Sinai tribes have a long history of collaborating with the armed forces. One of these situations was during the Israeli occupation of Sinai after the 1967 War, when the tribes refused suggestions and talks by Israeli occupation forces to separate Sinai from Egypt. Another example is when tribes assisted the Egyptian intelligence apparatus in the process of gathering information.

Military expert Khaled Okasha expressed his concerns and rejection to arming Sinai tribes, and he described tribal claims about the coordination with the armed forces as a “media trick”. The army does not need any help from the tribes, he added.

“It’s a conflict over [Sinai’s] fortune and power” between militant groups and Al-Tarabin, which erupted almost two years after the group had killed a member of the tribe and Al-Tarabin killed a militant. The conflict had partially ended with conciliation between the tribe and the terrorists, Okasha explained.

In 2015, Al-Tarabin called for arming tribes during the Sinai Tribes’ Union Conference for supporting the armed forces, but the call had failed because the conference was convened by Al-Tarabin. Other tribes, such as Al-Remailat and Al-Sawarka, refused to mandate Al-Tarabin to lead the tribal scene, according to the military expert.

In contrast to Okasha’s perspective, another military expert, Abdel Rafe’ Darwish, welcomed the coordination between the armed forces and some Sinai tribes in fighting extremist groups. From his point of view, Darwish believes that flexibility is needed in such a situation and that “necessity knows no law. The Syrian regime cooperates with the Lebanese militia of Hezbollah to fight extremists,” Darwish told Daily News Egypt.

He had no concerns or doubts about arming tribes because he believes that “they will hand their arms over to the army after defeating terrorists.”

Prominent British writer Robert Fisk said in an article published in the Independent on 4 May that “the Egyptian army is following the same contaminated path as many of its neighbours, by using a killer-militia in its war against Isis in Sinai.”

Most armies have “proxy allies” who can act as informants, such as the Syrians, the Iraqis, the Turks, and the Israelis when they co-opted with their own Lebanese militias between 1976 and 2000, and the Americans in Iraq. All ended up shamed by the cruelty of their supposed allies, Fisk explains.