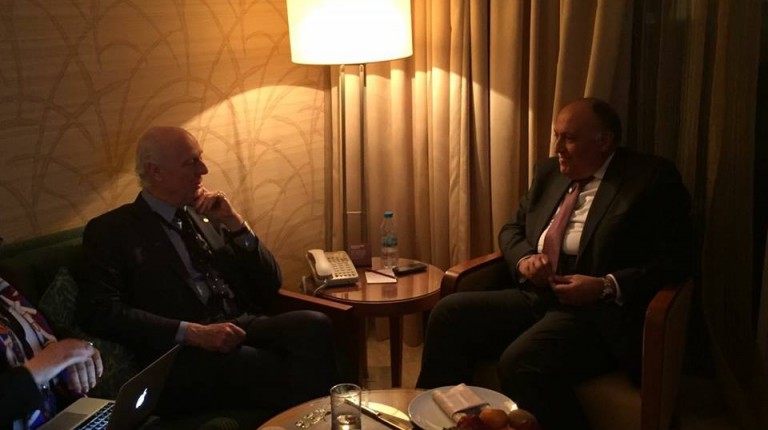 Minister of Foreign Affairs Sameh Shoukry met with Jason Greenblatt, the special envoy for the peace process and US president Donald Trump’s special representative for international negotiation, as well as the United Nations envoy to Syria, Staffan de Mistura, on the sidelines of the Arab League Summit in Jordan.

For his part, Greenblatt asserted the commitment of Trump to work with the Palestinian and Israeli sides to achieve a lasting peace through direct negotiations, lauding in this regard the Egyptian role at the regional and international levels aimed at reaching a settlement to the conflict.

Shoukry stressed that Egypt will continue to communicate with international partners who have the ability to resolve the situation to restore momentum and international support for the resumption of the peace process and encourage the Israeli and Palestinian parties to return to negotiations.

Regarding Shoukry’s meeting with de Mistura, the minister expressed Egypt’s keenness to ensure the success of the mission of the UN envoy, stressing the Egyptian position since the beginning of the Syrian crisis has been based on preserving the unity of the Syrian territories and ending the suffering of the Syrian people.

De Mistura expressed his thanks and appreciation for Egypt’s support of his role in the Syrian crisis, stressing his keenness to support Egypt’s efforts to reach a solution to the Syrian crisis.

In this context, he reviewed the results of his contacts with the international and regional powers concerned with the Syrian issue, as well as presenting his assessment of the outcome of the recent updates and the latest developments in the current round of Geneva negotiations.

The meetings came on the sidelines of the Arab Summit, which aims to discuss updates and solutions for regional issues of Arab countries, as well strengthen bilateral relations of attending countries.

Al-Sisi travels to Jordan as Arab League Summit kicks off