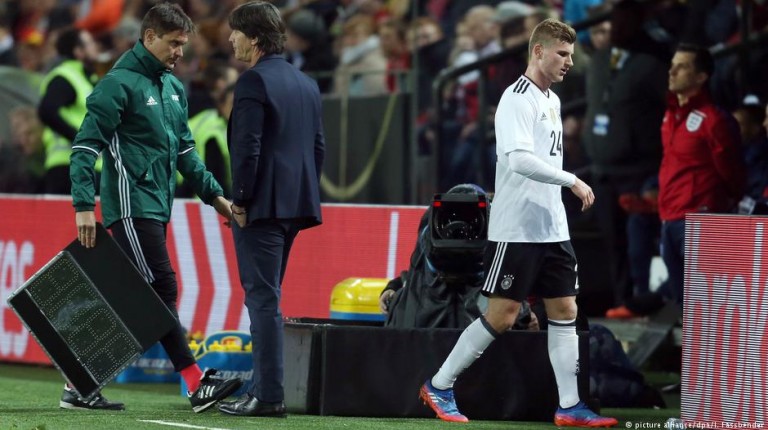 RB Leipzig striker Timo Werner has been ruled out for at least two weeks after pulling a hamstring in Germany’s match against England. Despite a difficult debut, Werner has received plenty of encouragement.On the night Lukas Podolski’s farewell appearance read like a Hollywood script, Timo Werner was reduced to the role of supporting actor on his debut for Germany.

The RB Leipzig striker had precious few touches and was not able to muster a shot on goal in Germany’s 1-0 victory over England on Wednesday. An innocuous performance ended in the 77th minute. Werner was brought off after tearing a hamstring. The whistles that accompanied his substitution, however, were more a damning verdict of the club he represents by the Dortmund crowd than a critique of his time on the pitch. Yet he was still satisfied with his first appearance for the national side.

“It was a great first game and a lot of fun,” he said after the match. “Hopefully I will be able to come back a few more times yet.”

Coach Joachim Löw seemed pleased with Werner’s performance, saying he had the “potential to become world-class” and attributed the difficulties he encountered to deviations from the original tactical plan that left the strikers with “their backs to goal far too often.”

His teammates too felt that the 21-year-old had settled into the national squad quickly. “Timo is incredibly explosive and is keen to learn,” said Real Madrid midfielder Toni Kroos. “He has lots of qualities and can play a role in the future. I got a great impression from him.” Mats Hummels described the newcomer as a “pleasant and modest guy that gives everything in training.”

The injury ruled Werner out of Germany’s World Cup qualifier in Azerbaijan on Sunday. Löw now has to deal with a lengthy injury list and needs several stars to recover in time for the upcoming fixture.

Goalkeeper Manuel Neuer, Mario Gomez, Sami Khedira, Julian Draxler and Mesut Özil all had to pull out of the England game with minor knocks.

Werner is expected to be out for at least two weeks. The diagnosis hit his club coach even harder than it did Löw.

“It is a catastrophe to lose such a player at this stage of the season,” complained RB Leipzig coach Ralph Hasenhüttl. Now just three points ahead of third-placed Borussia Dortmund, the Bundesliga new boys appear to be running out of steam after a record-breaking start to the campaign.

Leipzig have lost their last two matches and can ill-afford to lose their top scorer. Werner has 14 goals to his name already but will miss the fixtures against Darmstadt, Mainz and Leverkusen in the coming weeks.

What to watch out for on Matchday 18 in the Bundesliga