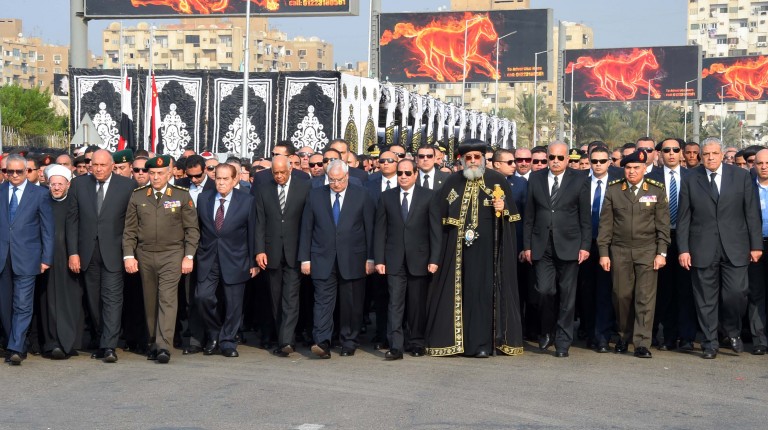 President Abdel Fattah Al-Sisi identified on Monday 22-year-old Mahmoud Shafiq Mohamed Mostafa as the suicide bomber behind the attack on the St. Peter and St. Paul Church which left at least 25 dead and 49 injured during mass on Sunday.

Following the announcement, the Ministry of Interior released a statement detailing Mostafa’s criminal record. Prosecution authorities had also released pictures of the alleged attacker, as well as photographs that showed only fragments that had remained of the man’s body, including his feet and lower legs, and a shredded face.

A photo of the suspect similar to the one released by authorities was found in an article by the local Al-Watan news website, dated 15 March 2014, where he stood with another man with weapons displayed on a table before them. Both men in the photo had signs of beating on their faces.

The article said the two were arrested in Fayoum in possession of weapons. They were referred to as “members of the Muslim Brotherhood.” One of the two was named Mahmoud Mostafa Mohamed Ahmed, aged 16.

Despite the age difference between the bombing suspect, and the one mentioned in Al-Watan’s article, the Ministry of Interior has confirmed they are both the same person. The ministry did not however explain the age disparity.

In fact, the ministry published the ages of the other suspects arrested in the church bombing investigation, but did not disclose Mostafa’s age, although Al-Sisi had identified the suicide bomber as a 22-year-old.

According to the Ministry of Interior, Mostafa was a wanted fugitive, who had been operating under the alias Abo Dagana El-Kenany. His identification was made possible through DNA testing at the crime scene.

The local Parlamany website reported he was first identified by the hairs on his leg, which raised suspicion as the explosion is believed to have taken place in the women’s section of the church.

The police report concluded that Mostafa carried out the attack by using an explosive belt, and that he was a member of a group affiliated with the outlawed Muslim Brotherhood. The report also claims that he had received firearms training in order to secure protests organised by the Brotherhood, and that he was caught in possession of an automatic weapon on 14 March 2014.

The report also confirmed an earlier statement to Daily News Egypt by lawyer Mahmoud Saadawi who worked on Mostafa’s case in 2014, who said that Mostafa was granted a court release.

According to a report published by the Ministry of Interior, Mostafa was “connected to takfiri cells and professed a takfirist ideology inherited from Sayed Kotb, one of the main thinkers of political Islam.”

Kotb is the author of many manifestos which several Islamist militant groups still refer to. He was sentenced to death and executed in Egypt in 1966.

The report also said that Mostafa was wanted in two cases related to “organised activity of takfiri elements.”

Human rights lawyer Yasmin Hossam defended the suspect in 2014. Speaking to Dream TV channel Monday evening, Hossam said she could not be sure whether her former defendant was the same person, adding that DNA tests—which take time—should solve the issue.

“He was a minor, 16 or 18,” she said. “His family called me saying he and his colleague were arrested [in 2014]. I attended interrogations with them. They faced charges of arms possession, belonging to a terrorist group, and protesting.”

Hossam said she defended the two minors because she believed the claim that they were randomly arrested during a pro-Muslim Brotherhood protest, while actually being on their way to class.

Hossam said that after a year in detention, prosecution authorities dropped charges against Mostafa, because there was no evidence. “The only charge that was upheld against them was protesting, and the court granted them a release,” she said.

The lawyer said she was shocked to hear that her defendant was allegedly the perpetrator of the attack, wondering what drove him to such an extreme act.

After collecting information on Mostafa, the ministry said it arrested four suspects, including a woman. Al-Sisi had announced the arrest of three men and a woman, adding that two more suspects were wanted.

Three male suspects and a woman

While several local media outlets reported Tuesday that prosecution authorities ordered a 15-day detention for the suspects, state TV quoted an unnamed official at the general prosecutor’s office denying the claims and asserting they were still under interrogation.

Ramy Mohamed Abdul Hamid Abdul Ghany, born on 20 October 1983 and holder of a bachelor degree in commerce. According to the ministry, he was in charge of protecting the suicide bomber and prepared him with the explosive belt.

Mohamed Hamdy Abdul Hamid Abdul Ghany, a barber born on 22 June 1979, was responsible for logistic support and organisation of their meetings, said the ministry.

Mohsen Mostafa El-Sayed Kassem, born in December 1981, was the messenger between the group and organisers of their planned attacks, including his brother Mohab, who is one of the wanted suspects.

Ola Hussein Mohamed Ali, born on 22 July 1985, was helping her husband (Ramy Mohamed Abdul Hamid Abdul Ghany) in spreading his ideas and connections on the internet. The ministry also said she was promoting extremist ideology on social media networks.

Mohab Mostafa El-Sayed Kassem, “the doctor” mastermind of the attack

Mohab Mostafa El-Sayed Kassem, the brother of one of the arrested suspects, is one of two suspects still at large. The other one is named Karam Ahmed Abdul Aal Ibrahim.

According to the ministry, Mohab was born on 2 November 1986 and works as a doctor. Mohab was mentioned in a second statement by the ministry.

Like Mostafa, the ministry said Mohab adopted the takfiri approach of Kotb, and later made connections with the so-called Sinai Province.

Sinai Province was first called Ansar Beit Al-Maqdis, and they had pledged their alliance to the Islamic State.

According to the police narrative, Mohab travelled to Qatar in 2015 and was in close contact to some of the fugitive Muslim Brotherhood leaders, who then provided him protection, financial, and logistic support in order to “disturb the stability of the country and incite trouble to divide national unity,” the ministry’s statement read.

Upon returning to Egypt, Mohab reportedly began to visit North Sinai and contact terrorist cells there, where he received training on the use of weapons and the manufacturing of bombs. He then returned to his hometown, Cairo.

The ministry added that Mohab was in charge of forming a group and training them to execute attacks in his residence area in Al-Zaytoun, Cairo.

Kamal was pronounced dead by the Ministry of Interior on 4 October. The ministry claimed in a statement that he had died in a security raid.

Kamal was accused by the ministry of assassinating former prosecutor general Hisham Barakat and colonel Wael Tahoon. He was also accused of attempting to assassinate former grand mufti Ali Gomaa, as well as conspiring to assassinate several police and army officers.

The Brotherhood accused the ministry of killing Kamal shortly after his arrest.

Linking the alleged suicide bomber and suspects to the Muslim Brotherhood’s group in Qatar, the Interior Ministry further referred to a statement issued by the Egyptian Revolutionary Council (ERC) on 5 December. “The statement threatened the Orthodox Church because of its support to the state,” the ministry said.

On 5 December, the council issued a statement titled “ERC aims at unifying the people against the criminals and corrupt.” It read: “The ERC repeatedly insisted on the unity of the Egyptian society with all its factions, including calls to Egypt’s Copts”.

The statement went on saying that “corrupt regimes were able to control religious institutions; on one hand, through the nationalisation of the Al-Azhar institution, and on the other hand through fuelling sectarian tension in cooperation with the Orthodox Church. This was reflected through the absolute support of the two institutions to the regime during 3 July 2013.”

ERC then said that in the wake of the struggle between all Egyptian factions against the ruling military, it will continue its attempts to liberate religious institutions from the monopoly of their respective heads Ahmed Al-Tayeb and Pope Tawadros II. The statement only ran in the Arabic language on ERC’s website.

In response to the ministry’s accusations, the ERC republished its statement from 5 December, assuring that “the struggle in Egypt is not sectarian, but rather the result of the dominance of gangs in ruling positions.”

The Muslim Brotherhood’s regime from 2012 to 2013 was marked by sectarian violence aimed at religious minorities. Attacks on churches by Islamists and their supporters have continued after Morsi’s ouster.