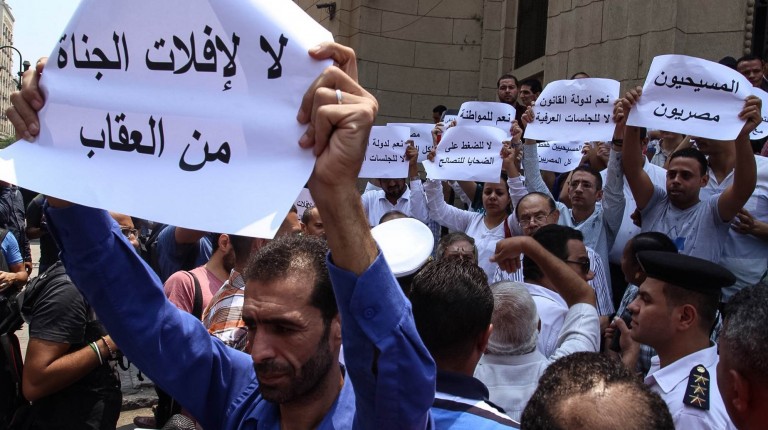 Issues of sectarian violence and the regulation of church construction continued to draw the attention of public opinion, as a group of citizens rallied Saturday at the High Court demanding rights for the Egyptian Christian community.

The rally consisted of nearly 30 people who chanted “Save your Coptic brothers”, as they resisted security attempts to make them leave.

Among the participants, Magda Tharwat, a member of the independent Egyptian Union for Human Rights (EUHR), told Daily News Egypt that the draft law on the construction of churches is restrictive and a source of inequality between Muslim and Christian citizens.

“Why should there be a law on constructing churches and not on mosques?” Tharwat asked. “Restrictions on churches include its definition as a fenced place of worship, upon which governors have the authority to licence with the obscure involvement of the National Security apparatus.”

Tharwat added that while licences are easily issued for cabarets, Copts struggle to be able to have a convenient place of worship. Churches are no source of “incitement to violence”.

“We demand citizens’ equality,” she said.

The rally was called for by a group named Egyptians Against Religious Discrimination and included both Muslim and Christian citizens. “The past weeks witnessed a significant increase [of sectarian violence] in some governorates, especially the governorate of Minya, amid a setback in law enforcement and the negligence of the police and prosecution to protect Coptic citizens,” the group said Thursday on its Facebook page.

The group said that in reaction to the ongoing events, they organised the rally on Saturday under the slogan of “no to the complicity of security in sectarian attacks on Copts”. This is in addition to filing a complaint to the prosecutor general demanding investigations into the perpetrators of such attacks, and to cease customary reconciliation sessions which prevent accountability.

The demands of Saturday’s rally have been voiced by defenders of human rights and freedom of expression. Members of parliament will discuss the law on the construction of churches on 21 August.

Nevertheless, sectarian violence continues. Clashes were renewed in Minya’s town of Samalut on Thursday. According to Copts Today website, three people were arrested and three others are wanted in the village of Abadeya El-Sherei following sectarian clashes.

The incident was reported to have begun as a dispute between a Muslim and a Coptic man regarding the ownership of a piece of land. The incident escalated as a fight erupted during a reconciliation session.

State intransigence towards churches must be lifted: Maat