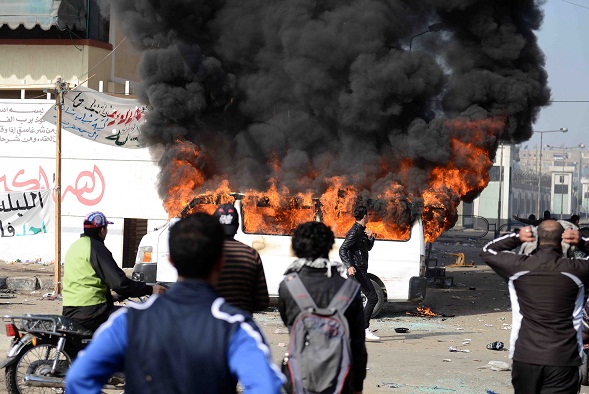 The Port Said Criminal Court postponed Sunday the trial session of 51 defendants in the case known as the “Port Said prison clashes” to 10 and 11 August to continue reviewing the rest of the CDs, state media reported.

The defendants are accused of killing police officers Ahmed Al-Balky, Ayman Abdel Azim and 40 others, as well as injuring over 150 others on 26 to 28 January 2013.

Police officers’ testimonies in previous trial sessions indicated that gunshots aimed at the prison and security forces followed the announcement of the verdict in the “Port Said Massacre” trial of February 2012.

One witness, a Central Security Forces officer, stated that “masked individuals” among the families present outside the prison were firing gunshots, which led to his injury.

Clashes marred the governorate of Port Said for three days, starting on 26 January, after the verdict in the “Port Said Massacre” case was released, sentencing 21 to death for their role in the death of 74 football fans in a football match in February 2012 between Al-Ahly and Al-Masry club.

Angry protesters and the families of prisoners gathered outside the Port Said prison where the prisoners sentenced to death were kept. They were accused of attempting to break into the prison.

The army surrounded the prison with 10 armoured vehicles, and deployed a tank at the entrance, and implemented a security plan for vital installations in Port Said.

The city then descended into violence, as protesters also broke into a police station east of the city and surrounded the Al-Arab police station.

Following the incident, former president Mohamed Morsi declared curfew in the Suez Canal governorates, which was defied by many citizens.