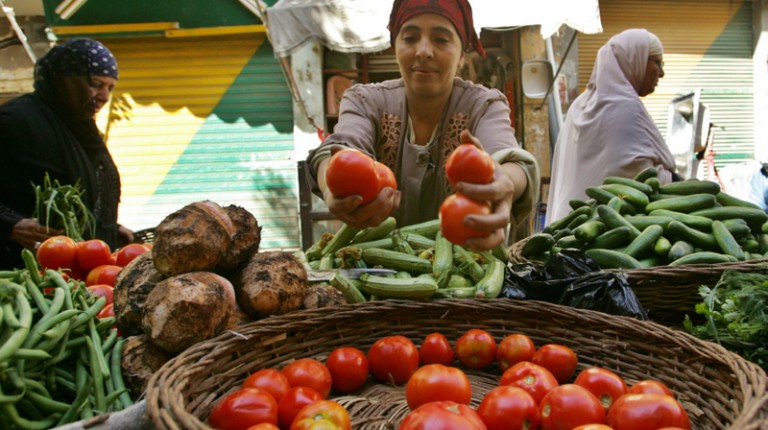 Couples, children, teenagers and the elderly can be seen coming in and out of Omaya in the Maadi district of Cairo with bowls of ice cream. The small ice cream store at the very end of Street 9 has been open for the past two years, and has both Syrian and Egyptian employees.

Outside the small store, customers can see a large photograph of a clean, peaceful looking Omaya Square, located in Damascus, where the owners of the store come from. The location has since seen shelling and mortars in fighting between regime forces and the Free Syrian Army.

Whilst a Syrian employee in Omaya says the store and its employees have not been bothered by officials or residents, their experience differs from many of their counterparts.

According to UNHCR media spokesperson Marwa Hashem, while many Syrians who have fled to Egypt were able to find jobs, this has not been an easy task due to Egypt’s reservation on refugee access to the labour market in the 1951 refugee convention.

“Egypt has a large black market and underground economy, so many refugees usually work in cafes or anything of that sort. Of course, they do not have insurance,” Hashem said.

Hashem added many of the Syrians who fled to Egypt were able to come with their savings, “but these savings have depleted over time”, she said, pointing out one of the more recent struggles of refugees residing in Egypt.

Many say that their treatment as Syrians in Egypt has changed drastically since they first arrived.

Whereas Syrians had initially been allowed into the country without visas, hundreds of Syrians have been detained and deported since July 2013 for allegedly not having proper residency paperwork to remain in Egypt. Many refuse to speak to Egyptian media, under security pretexts.

According to lawyer Mohamed Farouk, who has worked on several cases of Syrian arrests, Syrians had previously been allowed to enter Egypt without visas or on renewable tourist visas. During his year in the presidency, Mohamed Morsi stated that Syrians in Egypt no longer have to renew their residency, but never issued an official presidential decree to that effect, Farouk says.

“Without renewing their residencies, their presence became illegitimate, legally speaking,” Farouk said. He added that after Morsi’s military ouster in July 2013, and because of the media links created between Syrians and the Muslim Brotherhood, “the authorities began to treat them as a threat”.

According to Hashem, many refugees who are registered with the UNHCR and have their yellow card, through which they can obtain residency, choose not to obtain their residency through the asylum card. “We strongly advocate against this, and we encourage all refugees to register with their asylum card, because this is a document that is meant to protect them, legally.”

“This is a legal document that is just like an ID card for them in Egypt, and without a residency how are they living in Egypt?” Hashem added.

A Syrian refugee, who requested anonymity, told Daily News Egypt that obtaining residency through the yellow card means trouble if one wants to go back to Syria. “If the regime sees on your passport that your residency in a country was obtained through your refuge with the UNHCR, you don’t know what could happen. They might detain you,” he said.

There are approximately 300,000 Syrian refugees in Egypt, around 130,000 of whom are registered with the UNHCR, while the rest are not.

Further, there are currently 73 Syrian and Palestinian refugees held in Karmooz Police station in Alexandria, after their arrest on 1 November. The group was arrested after leaving Turkey, heading for Europe. The “mafia of illegal immigration” then forced them to land in Egypt, refugee Mohamed Darwish previously told Daily News Egypt.

Approximately 50 of the detained refugees began a hunger strike mid-February to protest “inhumane treatment” and their ongoing detention. The hunger-strike lasted for approximately 37 days, one of the refugees told Daily News Egypt, and was gradually broken depending on the physical and psychological states of the strikers.

“The hunger strike was a way for us to grab the world’s attention to our cause… but when no one cared the people became devastated,” one of the refugees said, adding: “If we were criminals we would know how long we have to stay in prison, but the problem is that no one knows until when this will last and to where they will go.”

According to Hashem, there are Palestinian refugees detained for “irregular departures” in governorates outside of Alexandria.

The UNHCR occasionally advocates against their ill-treatment within detentions, but in general, the twice-exiled Palestinian refugees from Syria are legally not allowed to register with the UNHCR.

“The government requested the UNHCR not register Palestinians from Syria,” Hashem said, adding that this took place at the onset of the crisis, when Syrians were arriving in 2012.

Whilst the Prosecutor General had ordered their release on 5 November, and despite reiteration of calls for their release, the Egyptian government has not taken any steps towards releasing the refugees.