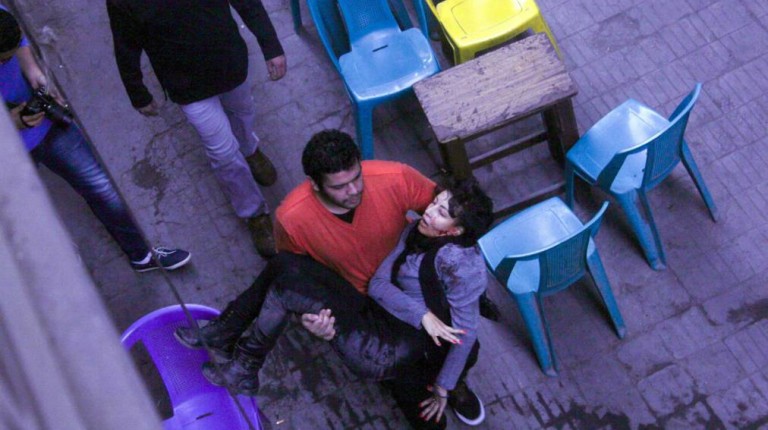 Al-Sabbagh, 32, was shot after police dispersed a protest of about two dozen people belonging to the Socialist Popular Alliance Party (SPAP) in Talaat Harb Square in Downtown Cairo on 24 January.

The international rights group believes that evidence gathered in the form of photographs, videos and witness statements prove that security forces are responsible for fatally shooting Al-Sabbagh with birdshot.

As part of the watchdog’s investigation into the incident, a video was released featuring Philippe Bolopion, who joined Human Rights Watch as United Nations Director in August 2010, analysing in detail a video footage of the shooting.

“Our analysts spent a lot of time looking at this video evidence frame by frame, we stabilized it; we zoomed in; we cross-referenced also still pictures that were taken on the scene within seconds of the shooting,” said Bolopion.

According to the video footage, four gunshots are heard. “The first two were fired in quick succession at the outset of the dispersal, with the third shot nine seconds later and the fourth shot seven seconds after that,” the watchdog said in its statement.

The analysis concludes that Al-Sabbagh was shot by the masked man in dark clothes who is seen in the video footage standing in the street beside a uniformed officer, identified as a police brigadier general.

“You can clearly see here this police officer getting into shooting stance, pointing his gun towards the protesters and then the shot rings and you can see the protesters here running away from the police and Shaimaa with her grey sweater falling to the pavement,” Bolopion explained as he showed the enhanced video in slow motion.

As the fourth and final shot was heard, Al-Sabbagh can be seen at the same moment lying on the sidewalk as a fellow member of her party, identified as Sayyid Abou Al-Ela from the video footage, tries to assist her.

Prosecutor General Hisham Barakat opened an investigation into Al-Sabbagh’s death the same day. In a statement, Barakat confirmed that all available evidence would be reviewed, and announced his commitment to “apply the law to everyone”.

HRW interviewed four eyewitnesses to the shooting who confirmed their testimonies, which were previously posted on various media platforms.

Interviewees include Azza Soleiman, lawyer and director of the Centre for Egyptian Women’s Legal Assistance; Osama Hammam, a photographer who was covering the protest, and Sayed Abul Ela, a party member.

The Qasr Al-Nil district prosecutor’s office, which is investigating the incident, has charged five witnesses, including Soliman, with violating the Protest Law and resisting the authorities.

Vice president of Al-Sabbagh’s party, 60-year-old Zohdy El-Shamy, who was present at the protest and went to the prosecutor to offer his testimony, was later arrested. El-Shamy was being questioned as a suspect for carrying a weapon to the protest.

El-Shamy was detained for almost 24 hours, but was alternated between the police station and the district prosecutor’s office for two days until his release on Sunday night, according to Ragia Omran, a lawyer who was present with El-Shamy during investigations.

“It is important to note that the prosecution did not charge El-Shamy with the murder of Shaimaa; he was only charged with carrying a weapon in his jacket pocket. However, after his home was searched by the National Security Investigations, it was found that there are no traces of cuts in the jacket and it was proven that it could not have been used to carry a weapon,” said Omran.

Omran added that it is “disgraceful and completely out of line to hold a 60-year-old man under arrest in that way; he was handcuffed with a police officer for three hours straight yesterday before his release.”

The SPAP filed submitted a list of demands yesterday to the prosecutor general. Demands included holding the Ministry of Interior responsible for Al-Sabbagh’s murder, and excluding the ministry from any investigations or procedures relating to the case.

The party also demanded that a judge independent from the prosecution be assigned to the case to ensure fair and impartial investigation.

A number of parties, including Al-Dostour, Al-Adl, and Al-Karama parties, as well as public figures like Hamdeen Sabahy, have all expressed their solidarity with the SPAP’s demands.

“Over the last few years, hundreds of people have been killed by the police in demonstrations in Egypt, and frankly you almost never get this type of evidence to document it and often have to rely more on eyewitnesses…The government should seriously investigate and hold the people responsible for this death accountable,” said Bolopion.