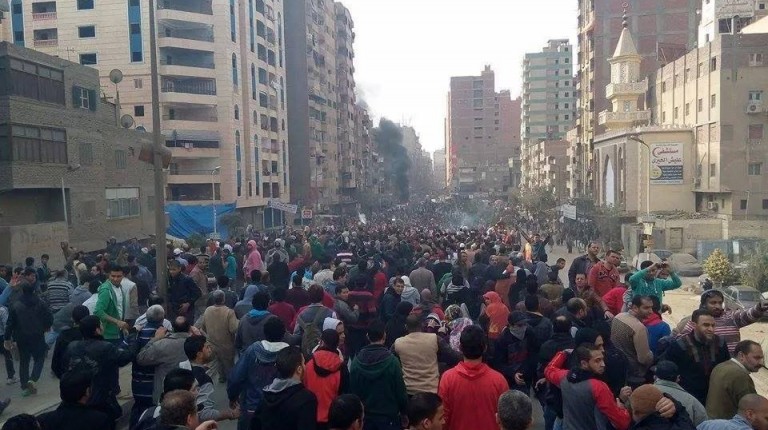 Dubbed by some residents as the “Land of Fear”, the district of Matariya in north-eastern Cairo has become the centre of an increased security clampdown following days of clashes and deaths during demonstrations marking the fourth anniversary of the 25 January Revolution.

Daily News Egypt contacted Mohamed Galal, a leading figure of the Salafi Front. He asserted the security situation in the neighbourhood remains tense, adding that “policemen and security agents in plain clothes are deployed everywhere, in every street and café… Two demonstrations were supposed to start, but were cancelled due to security reasons.”

“In Matariya Square, police are searching pedestrians and do a content check on mobiles. In the smaller streets, riot police personnel carriers and trucks are stationed, as well as mobile patrols.”

Galal told Daily News Egypt that as the minister of interior visited the district more than 10 armoured personnel carriers were stationed near the Matariya police station.

He added that on Wednesday a number of protests are expected to commemorate on 28 January the anniversary of the “Friday of Rage”.

“Whoever will protest today should remove all political content from his phone and should get familiar with the map of the neighbourhood,” he said.

Minister of Interior Mohamed Ibrahim paid a visit to the lower-income area Tuesday night to inspect security conditions and tell officers to be “direct” and “decisive” in the elimination of any further unrest in the neighbourhood.

The area has become the most volatile district in all of Cairo during the anniversary commemorations, with Matariya Square hosting large demonstrations beginning on Sunday that were violently dispersed with birdshot and tear gas, according to eyewitnesses.

The rights group Association for Freedom of Thought and Expression (AFTE), in a report published Tuesday, has researched the deaths that occurred over the past days, and established the names of 18 individuals from Matariya who were killed on 25 and 26 January.

The Ministry of Interior maintains that no civilian deaths over the anniversary resulted from the actions of security forces, proposing that in areas like Matariya civilians died owing to the infiltration of the “terrorist Muslim Brotherhood” who fired live ammunition and threw Molotov cocktails. However, AFTE contends that all deaths resulted from clashes with security forces.

In his visit to Matariya on Tuesday evening, the interior minister met leaders of security forces in the area and inspected their preparations for further unrest, calling for a heavy response to any act of lawlessness.

The minister praised the “morale of the troops and officers and their determination to meet the challenges facing the country,” according to an MOI press release.

According to state news, Horreya Street, a main thoroughfare leading to Matariya Square, has been closed, and security in the neighbourhood has been redoubled, with armoured vehicles, tanks, and Central Security Forces troops stationed throughout the area.

In total, the interior ministry reported that 516 people were arrested across the nation in the days surrounding the anniversary and on Tuesday prosecutors ordered the detention of 43 people in Matariya, state news reported. They are accused of the murder of both civilians and security personnel, and attempted murder.