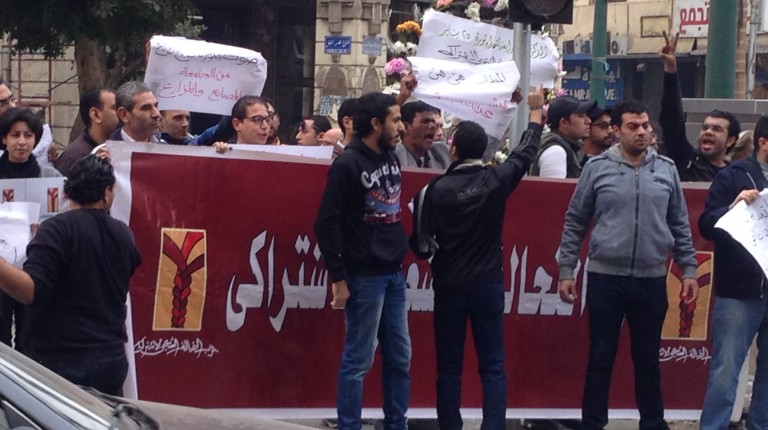 State-run newspaper Al-Ahram was among 20 media organisations who signed in November a petition agreeing to self-censor on criticising the president’s acts. However, a front page editorial by an Al-Ahram editor, Ahmed Sayed Al-Naggar, strongly criticised the attack on the unarmed protest in which Al-Sabbagh died.

The editorial piece on Al-Ahram condemned the arrest of the protesters, the use of birdshots against them, and the Protest Law.

Media expert Yaser Abdel-Aziz said “the Egyptian media coverage on the events was very far from impartiality”. “Voices used in the coverage all expressed sympathy towards the stability and security of the nation,” he added.

According to Abdel-Aziz, this direction is unjustified yet is understandable, referring to the challenge Egypt is currently facing on the security level and the media level as well.

He added that western media outlets have also been subjective and one-sided towards current events, adding that they are not shedding light on the other side of “terrorism” which Egypt is facing.

The Egyptian foreign ministry broadly reviewed the western reactions of the violent events commemorating the fourth anniversary, on Tuesday, saying it was “utterly unlike the reality”.

The ministry also added in their official statement that official responses from the prosecution and the Forensic Medicine Authority to investigate the death of Al-Sabbagh were ignored.

Covering the very first attack which took place on Saturday, the biggest international news organisations have all depended in their narratives on local media reports and witnesses’ testimonies.

The New York Times published an  extensive read on the protest and the attacks that followed it on the same day, using a video previously published by state-run news agency MENA. It also used official statements from the interior ministry and health ministry. On the other hand, they interviewed local witnesses who were there during the attack.

Al Jazeera, often criticised by the Egyptian authorities and mainstream TV channels, has covered the incident more thoroughly a day later by adding quotations from the interior minister which denied using birdshot to disperse the protest.

Al-Sabbagh, 31, was among a small group of demonstrators at Talaat Harb Square in central Cairo, who intended to lay wreaths at the nearby Tahrir Square to commemorate the victims of the revolution. During the dispersal by security forces Al-Sabbagh was struck by birdshot and died from her wounds.