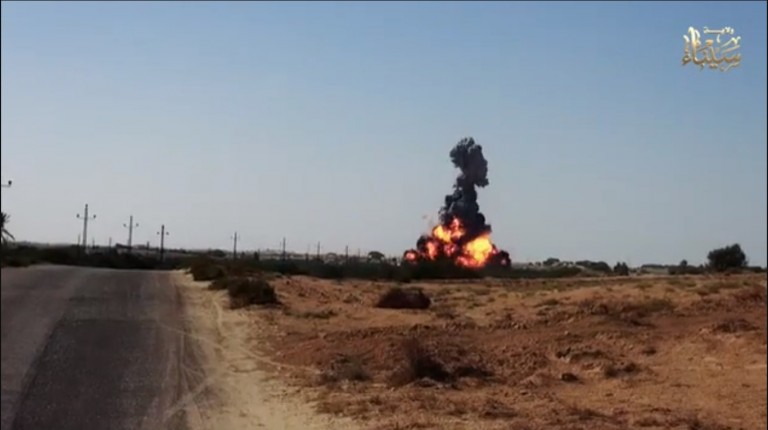 The group made the claim in a video posted online late on Friday, in which it also presents itself as ‘State of Sinai’ in response to a call made by Islamic State of Iraq and Al-Sham (ISIS) leader Abu Bakr Al-Baghdadi, to whom the group officially pledged allegiance on Monday.

The 30-minute video shows a man, with his face blurred by video editing, said to be Abu Hamza Al-Ansari. The group alleges he is the person who carried out the suicide truck bombing in Karam Al-Qawadees.

The group then shows a red truck driving into a military checkpoint followed by a large explosion. The attack is shown from two different angles.

In the aftermath of the explosion, groups of masked men sweep the area firing at injured soldiers. The group also stated they “pursued the fleeing soldiers and eliminated them”, showing images of dead servicemen in the desert.

ABM said they carried out the attack as there is “no way Jerusalem will be free without the cleansing of Egypt from the agents of the Jews”.

The video, entitled ‘Onslaught of Ansar’, also shows various attacks on security forces and the explosion of a gas pipeline.

“It’s one thing to announce allegiance to the ‘Islamic State’ [IS], and another to announce a large scale attack in the name of the IS”, said Zack Gold, a Visiting Fellow at the Institute for National Security Studies who closely follows the security situation and militant groups in Sinai.

ISIS rebranded itself as ‘Islamic State’ over the summer after claiming large swathes of territory in Syria and Iraq. Al-Baghdadi was appointed ‘Caliph’ and is known as ‘Caliph Ibrahim’ by the group.

Gold noted a “jump in production value and graphics” compared to that of ABM’s previous video statements, saying the video could have been produced with assistance from ISIS. Gold also pointed out that the group “used the claiming of this attack as a public statement of being a province of the IS”.

“The change in name and nature of the video does show that ABM, or now ‘State of Sinai’, will be subservient to the orders of the IS,” said Gold. “It is still too early to know what the pledge means for ABM, but the video suggests the local agenda is being overcome by an international agenda being directed from outside”, added Gold.

The analyst pointed out that while ABM may be “trying to bridge the gap between the local agenda and agenda of the ‘Caliphate’” it is still not clear if they will mirror the sectarian nature of ISIS, adding that it “seems they are moving in the direction of the IS,” and that he is “more concerned today [Saturday] than before [Friday’s] video”.

President Abdel Fattah Al-Sisi said that “foreign elements” had supported the attack on 24 October in its immediate aftermath. A separate incident occurred around the same time at an Al-Arish checkpoint where a shootout resulted in the deaths of at least three other soldiers. No mention of this incident was made in Friday’s video.

Gold says that the claim by ABM “does not disprove” Al-Sisi’s claim. He highlighted that in the “aftermath of large scale attack is that someone should be held accountable”, adding: “Instead of considering that blame should be placed on the actions or lack of training of the military, the government and the military find it “more convenient to blame outside actors and Gaza specifically”.

Security in North Sinai has heightened since the 24 October attack, including the enforcement of a state of emergency and curfew in areas of North Sinai. There has also been the relocation of residents within 500 metres of Egypt’s border with Gaza, with the stated aim of establishing a ‘secure zone’. The armed forces stated that the creation of the zone is aimed at eliminating the use of smuggling tunnels that cross the border.

In response to whether or not ISIS is in Egypt, Gold stated: “You can say that in the sense that a group that has always been in Egypt is now affiliated with IS.” He added: “the question to watch now is whether ‘State of Sinai’ will move in that direction”.

The Sinai-based militant group has claimed responsibility for numerous attacks against security personnel and infrastructure over the past two years. The group’s activities intensified following the ouster of former president Mohamed Morsi in July 2013, accusing Egypt’s security forces of “slaughtering Muslims”. They attribute blame for this to Al-Sisi and Interior Minister Mohamed Ibrahim, whom the group attempted to assassinate in September 2013.