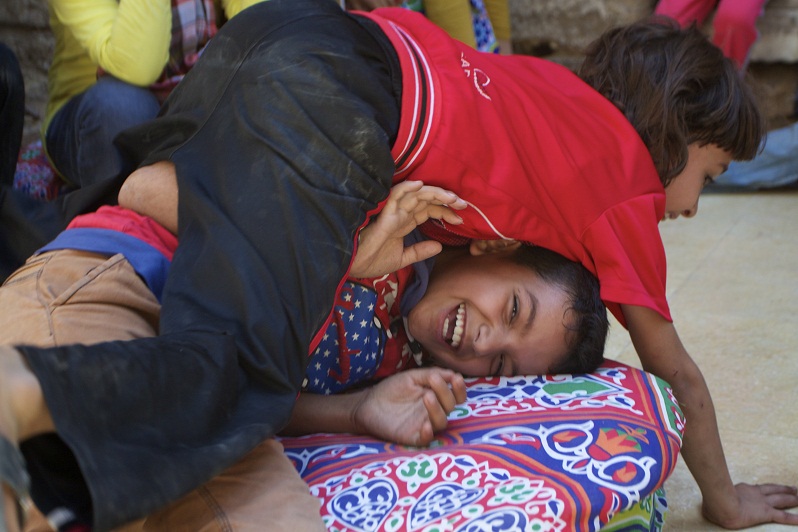 Small houses hug the water stream at Al-Max, Alexandria, as sunrays infiltrate through the colourful sails of the fishing boats. Instead of moving around with their spread nets, the boats float still. The polluted water has not enough fish to be caught.

Al-Max is one of several areas that have been affected by the environmental disruption that has happened in Egypt over the past decades. In a lecture organised by the Netherlands-Flemish centre, Isabelle Bottoms, an independent researcher, explained how this disruption seems to exclusively haunt the poor, in the absence of “environmental justice”.

As much as 270 tonnes of organic waste gets thrown into the river Nile daily, according to report by the Egyptian Center for Economic and Social Rights (ECESR). Each year, the river receives approximately 4.5 tonnes of industrial waste.

Any disruption in one of the components of the ecosystem, such as air and water, affects people, Bottoms said.  Poor people, however, are more vulnerable to these effects, since they are more likely to live in rural places that depend directly on nature, or near industrial areas.

One example of villages where the poor have been affected by the environmental disruption is Al-Maghara village in North Sinai, she said. As industrial complexes expand along the horizon, the risk, which the residents of the village face, grows.

“In the past decades, Egypt has moved more towards industrialisation,” she said. “Bedouins, farmers and fishermen got marginalised.”

The disruption also has an indirect effect on people living in poor areas. When farmers or fishermen lose their work because of pollution, it is likely they are less able to afford essential services healthcare and education, she said.

The effect is obvious in rural areas, but not restricted to them.

Urban environments still depend on products produced in rural areas, such as vegetables and fish, she said.

A more “obvious” form of damage can be seen in the city’s cultural ecosystem, which offers people services such as inspiration and psychological wellbeing as a result of their interaction with nature, she said.

“We don’t have that in the city,” she said, “even if you go to a park, you see this manicured man-made kind of nature.”

Rich people, who can afford to travel, have more access to this kind of “eco-services”, she said.

Activists have called for the incorporation of the environmental aspects in government policies regulating industries. These policies, however, are going in a different way.

“I don’t find anything hopeful,” Bottoms said, “especially when you see a decision like that of using coal.”

In April 2014, the Egyptian cabinet approved the use of coal instead of natural gas in the cement industry, whose profits increased from 16% to 70% in the past decade, according to an infograph by ECESR. The infograph suggests several alternatives to coal, including organic wastes, which pollute the Nile, and Rice husk, which gets burnt in residential areas polluting them.

Despite the absence of actual steps towards better environmental policies, potential plans offer some hope.

“Laila Iskandar is thinking in circles, she wants to close the loop,” Bottoms said.

Iskandar, Minster of Urban Development and former minister of environment, plans to apply waste separation at the source to facilitate recycling.

“She is thinking along the right lines,” Bottoms said, “but I don’t know about actualities.”