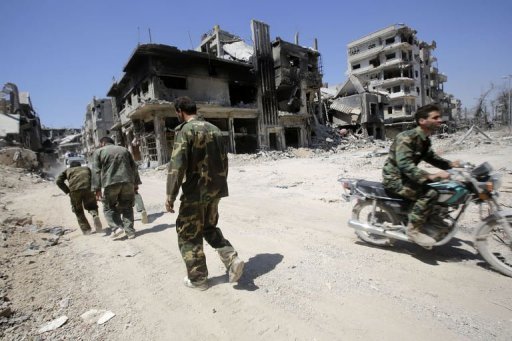 The Khaldiyeh district of the reputed “capital of the revolution” against President Bashar al-Assad looks like it has been mangled by the steel jaws of an enraged giant.

Assad’s forces finally expelled insurgents from Khaldiyeh and its narrow alleyways on Monday after a month-long assault, almost two years after their foes seized control of the district in the heart of Syria’s third-largest city.

No building has been spared.

Some roads are still cut off with sand and gravel berms, in front of canvas stretched across the road and attached to balconies, designed as protection from snipers, the scourge of both sides in the 28-month conflict.

“This is how we were able to advance,” a lieutenant colonel told AFP on a tour of the urban battlefield, declining to give his name.

“We had to erect that canvas to protect us from bullets fired from the buildings. If it weren’t for the snipers and booby-traps, we’d have been able to advance quicker,” the officer said, sitting near his makeshift headquarters in a semi-destroyed building.

“Khaldiyeh is totally under our control and we have fully mopped up.”

Against the artillery fire and air strikes of regime forces, rebels punched holes in the walls of apartment blocks and dug tunnels to give them mobility in the battle, which pummelled homes and shops without discrimination.

“We had to fight block by block, building by building, floor by floor. There were even cases of hand-to-hand fighting,” another officer said, about to clamber onto his motorcycle.

“We were so close to our enemies that we could hear what they were saying. We told them to give up and they refused, answering with Islamist phrases,” he said, estimating that 40 percent of the rebel fighters were non-Syrians.

Khaldiyeh was the second key military triumph for Assad’s forces in less than two months, after the army, backed by fighters from Lebanese Shi’a militant group Hezbollah, recaptured the Homs province town of Qusayr near the border with Lebanon on June 5.

“The battle for Khaldiyeh was tougher than Qusayr because the roads are very narrow and especially because the buildings are taller,” the lieutenant colonel said.

On his first visit since the capture of Khaldiyeh, the governor of Homs province, Talal al-Barazi, was taken aback.

Alongside him, Syria’s national reconciliation minister, Ali Haidar, weighed what the future holds for his country.

“What I see is terrible,” he said. But “despite all this destruction, Syria will emerge from the conflict through a political path. There’s no other way than national reconciliation.”

Yazan, an anti-regime militant, sees things quite differently, having stayed on in Khaldiyeh until the bitter end before fleeing to a rebel area.

“Of course, people are exhausted after all this time. They’ve lost their neighbourhood… But this doesn’t mean the revolution’s been snuffed out. We won’t give up the besieged zone,” he told AFP by Internet, referring to the last rebel-held enclaves in the Old City of Homs.