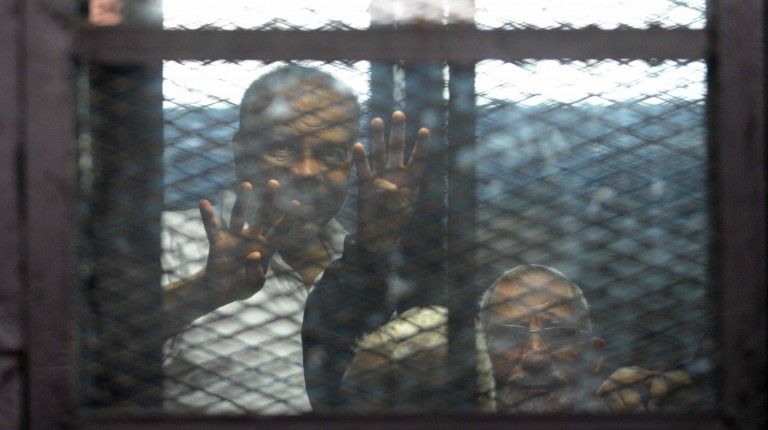 The trial of leading Muslim Brotherhood figures, including Supreme Guide Mohamed Badie, for the violence outside the Brotherhood’s headquarters in 2013 was postponed on Tuesday to 16 August.

Badie’s two deputies Khairat El-Shater and Mohamed Bayoumi, along with 15 other Brotherhood members, are charged with inciting the killing of protesters, premeditated murder and possession of firearms, among other crimes, during the 30 June demonstrations preceding the ouster of former president Mohamed Morsi.

Several protesters were killed during the demonstration in which the Brotherhood headquarters in Cairo’s Moqattam neighbourhood was burnt down. People on the scene reported they saw both live ammunition and birdshot being fired from the building.

Nine protesters were killed and 91 were injured during the clashes, according to state-run Al-Ahram.

Brotherhood leaders, including Badie and Morsi, are defendants in several other cases. Charges include espionage, prison break, insulting the judiciary, and inciting the killing of protesters outside the presidential palace in December 2012.

Badie was arrested from a Nasr City apartment on 20 August, while El-Shater was arrested on 5 July. Morsi has been detained since his 3 July ouster. His location was unknown until his first appearance in court on 4 November.

Badie was handed two death sentences in June, one preliminary and one ratified. Death sentences that have been upheld will be automatically handed to the Court of Cassation for appeal and if accepted a retrial will be ordered.

Last month, he and Al-Beltagy were sentenced to life in prison for charges of murder, inciting violence and blocking the Cairo-Alexandria agricultural road in Qaliub in July 2013.