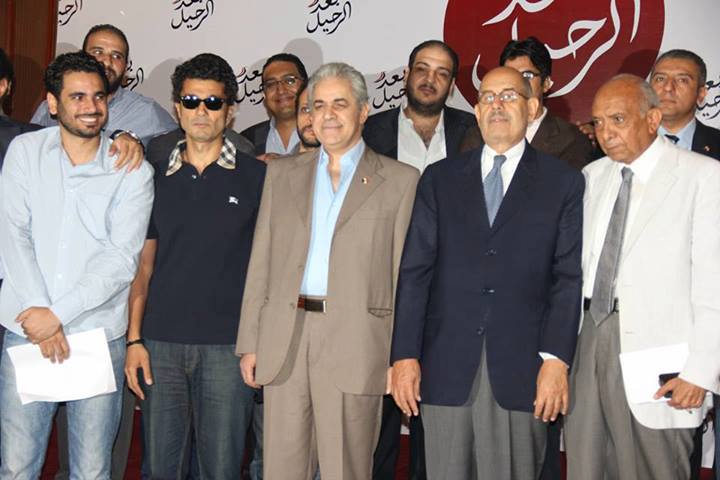 Chairman of Al-Dostour Party and coordinator of the National Salvation Front (NSF), Mohamed ElBaradei, publically called for President Mohamed Morsi to resign ahead of mass protests by the opposition scheduled for next week.

ElBaradei said Morsi’s resignation was necessary to begin a “new phase” in post-revolution Egypt on Saturday in a press conference held by the NSF called “after the departure of President Mohamed Morsi.”

The current regime, ElBaradei argued, had not focused on the original reasons for the revolution and instead had worked to create an artificial rift between the Egyptian people based on religion ,and had marginalised a large group of citizens who had voted for Morsi in last year’s presidential elections.

ElBaradei said he considered the Tamarod petition campaign “democratic, peaceful, and popular” and in the context of a “failed regime.”

The NSF leader also strongly criticised the government’s handling of Egypt’s struggling economy and foreign policy with other counties, including Ethiopia.

Al-Tayar Al-Sha’aby founder, Hamdeen Sabahy, said the upcoming 30 June protests would beckon the “second phase” of the revolution, in which the Egyptian people would not leave the country in the hands of a “tyrannical group.”

He accused the current regime of “reversing” the objectives of the 25 January Revolution, and said upcoming protests would not be against any particular individuals, but the Muslim Brotherhood as a whole.

Sabahy said that protesters would fill the country’s squares on June 30 in a peaceful manner and would not leave until “our goals are achieved.” He reiterated ElBaradei’s message of a roadmap in place for post-Morsi Egypt, saying a six-month transitional period would focus on social justice, the formation of a constitution by consensus, and a “fair” elections law.

Sabahy also said that the Tamarod campaign expressed the popular will of the people and would provide leadership in the coming transitional phase.

In a second press conference later on Saturday, ElBaradei said 30 June was the beginning of the “completion of the revolution,” which he said had gone off course under Morsi’s rule. He added that the demonstrations would seek the revolutionary goals of “bread, freedom, social justice, and personal dignity.”

The opposition leaders’ comments come almost one week before the one year anniversary of President Morsi’s inauguration, a day in which mass demonstrations are planned throughout the country.

The Freedom and Justice Party blamed leaders of the NSF and the Tamarod campaign for sending Egypt into a “spiral of chaos and violence” ahead of 30 June under the guise of political demands.

On Friday, a mass rally was held near the Rabaa Al-Adaweya mosque in Nasr City by a number of Islamist factions including the Muslim Brotherhood, Al-Jamaa Al-Islamiya, Al-Wasat Party, and the Building and Development Party, dubbed “yes to legitimacy, no to violence.”

The Tamarod campaign recently announced it had reached its goals of 15 million signatures calling for early presidential elections.