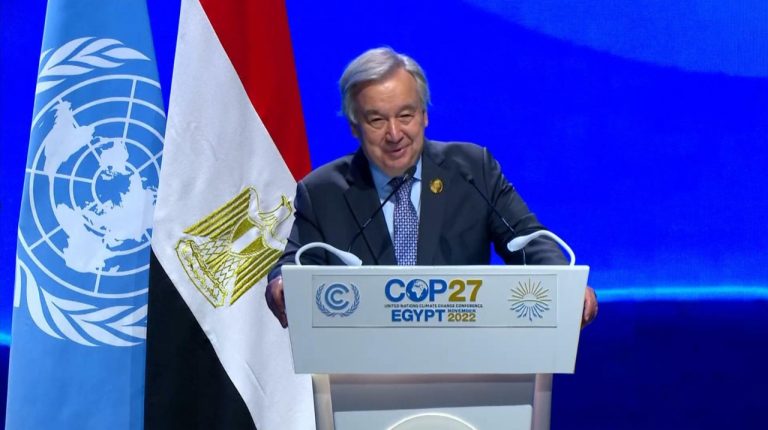 Sharm El-Sheikh – UN Secretary-General António Guterres said that there is clearly a breakdown in trust between North and South and between developed and emerging economies, with just 24 hours before the closure of the COP27.

Guterres made his remarks in a statement on Thursday evening, saying that COP27 Parties “remain divided on a number of significant issues” such as the loss and damage issue, achieving the goal of the 1.5 target and filling the emission gap, and climate finance.

“We are at crunch time in the negotiations. This is no time for finger-pointing. I am here to appeal to all parties to rise to this moment and the greatest challenge facing humanity,” Guterres noted.

The UN Secretary-General appealed to the parties to act in three critical areas: First, the most effective way to rebuild trust is by finding an ambitious and credible agreement on loss and damage and financial support to developing countries.

He explained that the most effective way to rebuild trust between the North and the South is by finding an ambitious and credible agreement on loss and damage and financial support to developing countries. “The time for talking on loss and damage finance is over. We need action.”

Guterres also appealed to the parties to “forcefully” address the huge emissions gap. He further called for pushing for a Climate Solidarity Pact.

The COP27 kicked off in Egypt’s Sharm El-Sheikh on 6 November and will run until 18 November.