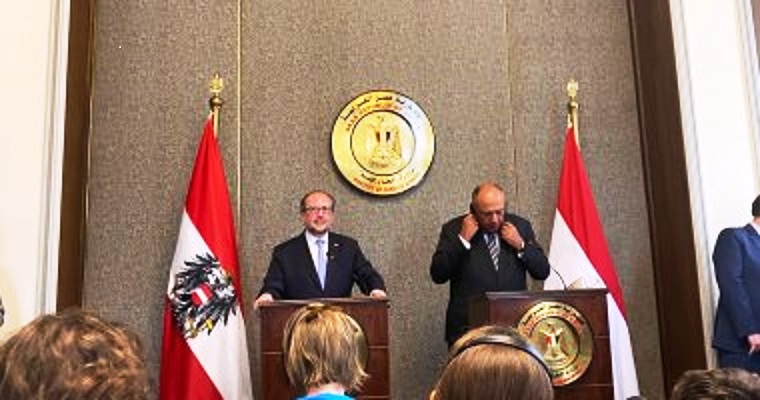 Minister of Foreign Affairs Sameh Shoukry met with his Austrian counterpart Alexander Schallenberg on Sunday within the framework of strengthening bilateral relations between Egypt and Austria.

The two ministers held a session of bilateral talks to discuss ways to enhance cooperation between Egypt and Austria, especially in the political, economic, and investment fields, as well as international and regional issues of common concern.

In a joint press conference, Shoukry said that the talks touched on regional and international issues of mutual concern and coordination on special developments in the region, clarifying that relations between Egypt and Austria are based on mutual trust and friendship.

He added that the consultations touched on bilateral relations, the economic sector, and promising opportunities between the two countries, along with expanding the scope of cooperation.

Furthermore, Shoukry noted that the Austrian FM will sign an important contract to supply railway tracks for Egypt’s projects and establish a factory to produce its components in Egypt.

He also pointed out that the talks touched on the situation in the occupied Palestinian territories, the situation in Syria, Libya, and Yemen, and the situation in Africa, explaining that the Grand Ethiopian Renaissance Dam (GERD) was one of the topics that was emphasised in the discussions, pointing to the importance of informing Austria as a member of the EU about the Egyptian position on the GERD.

Additionally, Shoukry expressed his rejection of military solutions in Libya, stressing that dialogue is the only way to hold presidential and legislative elections as soon as possible in accordance with the interests and sovereignty of Libya.

He also highlighted the efforts made by the meetings of the constitutional track in Cairo and then in Geneva and the meetings of the Joint Military Committee to consolidate the cease-fire, stressing that the unrest that took place indicates the dissatisfaction of a large segment of Libyans to postpone the elections.

Shoukry then went on to say that Egypt supported the Libyan political dialogue forum, but it was not implemented, and the time period for the implementation of the road map was exceeded, adding that Egypt, however, continues to push for a Libyan consensus that will lead to elections.

He then called for respecting the legitimacy of the Libyan House of Representatives and the Presidential Council and working to push for holding the elections, stressing the importance of the departure of all foreign forces from Libya and resolving the problem of militias.

Moving on, the Egyptian top diplomat stressed that the Russian-Ukrainian War has had an impact on all countries of the world, clarifying that Egypt is one of the largest importers of wheat in the world, but that it has sufficient reserves for its people and is working to acquire more quantities.

He added that cooperation with the UN is crucial to ensure the safe exit of grains and to deal seriously with food security, noting that Egypt is in contact with all parties to restore stability and halt military operations in general so the crisis can be fully resolved.

Moreover, he touched on the Egyptian economic reform programme, which enabled the country to overcome the repercussions of the coronavirus pandemic and the war in Europe.

He went on to say that Cairo is hosting about 6m refugees in the country and allows them to be integrated in the Egyptian society.

“We do this within the framework of our international responsibility and the sensitivity of this issue to European countries, as well as the risks of migrants crossing the Mediterranean in an unsafe manner, and we hope that the issue will be dealt with in a comprehensive perspective,” he added.

For his part, Schallenberg said that Egypt is a key partner of the EU, adding that the two FMs’ talks touched on the fight against terrorism, illegal immigration, the Russian-Ukrainian War, and the global food crisis resulting from it.

He added that the climate situation in the world is of great importance, and that work is currently underway to make the UN Conference of Parties on Climate Change (COP 27) that will be held in Sharm El-Sheikh in November a success, pointing out that his country fully supports Egypt’s efforts in its presidency of the event.