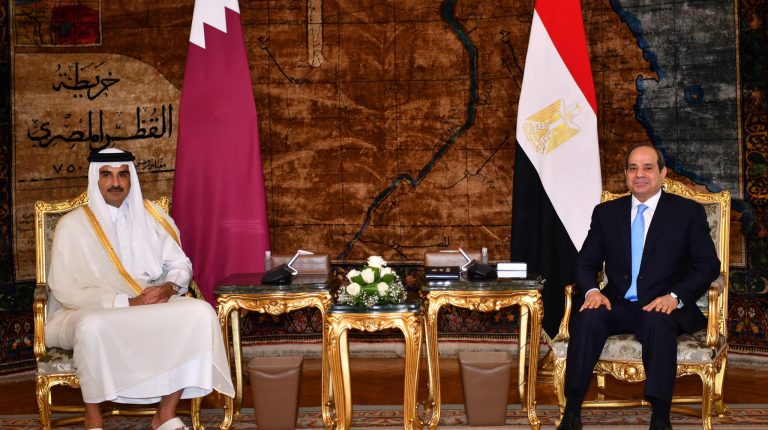 The two leaders held a bilateral meeting followed by expanded discussions that included the delegations of the two countries, according to Presidential Spokesperson Bassam Rady.

The last visit of the Emir of Qatar to Egypt was in 2015 to attend the Arab Summit in Sharm El-Sheikh.

Rady added that Al-Sisi described Tamim’s visit as an important step in developing bilateral relations between the two countries in various fields, congratulating the emir on the anniversary of his assumption of power in his country.

In the meantime, the Tamim congratulated the Egyptian president on the approaching anniversary of the 30th of June Revolution, expressing his country’s “appreciation for Egypt’s leadership and people, especially in light of its pivotal role in serving Arab causes and its efforts to strengthen Arab solidarity.”

The Qatari monarch also affirmed his country’s keenness to continue reciprocal steps to advance and strengthen the various mechanisms of bilateral cooperation between the two brotherly countries during the coming period by maximising Qatari investments in Egypt and exploiting the wide investment opportunities available, praising in this context the contribution of the Egyptian expat community to the process of construction and development in Qatar in various fields.

Furthermore, the two leaders agreed to develop bilateral cooperation between the two countries in various fields, especially in the energy and agricultural sectors, as well as investment cooperation and revitalisation of trade exchange, especially with regard to enhancing the flow of all Qatari investments to Egypt in light of its service to the common interests of the two brotherly countries.

Rady added that the meeting also covered regional developments, with the two leaders agreeing on the necessity of uniting and focusing the efforts of Arab countries, as well as strengthening coordination between the two countries to deal with various regional and global crises.

In terms of developments pertaining to the Palestinian cause, Tamim praised Egyptian efforts to reconstruct the Gaza Strip and agreed on the importance of working to revive the peace process in order to reach a just and comprehensive solution to the Israeli-Palestinian issue in a way that guarantees the legitimate rights of the Palestinian people in accordance with the references of international legitimacy.

Moreover, the two leaders discussed ways to deal with the negative repercussions of the Russian-Ukrainian War on the global economy as well as cooperating to combat terrorism and extremist ideology.

Additionally, the two sides welcomed the upcoming summit that will be hosted by the Kingdom of Saudi Arabia and will include the leaders of the Gulf Cooperation Council, along with Egypt, Jordan, Iraq, and the US.

The Qatari Emir’s visit to Cairo comes days after the visit of Saudi Crown Prince Mohammed bin Salman to Egypt, during which he concluded a number of economic agreements.

Diplomatic and political relations between Cairo and Doha were restored following the signing of the Al-Ula Declaration in Saudi Arabia in January 2021, in which Saudi Arabia, Egypt, the UAE, and Bahrain agreed to end their boycott of Qatar, which began in June 2017.