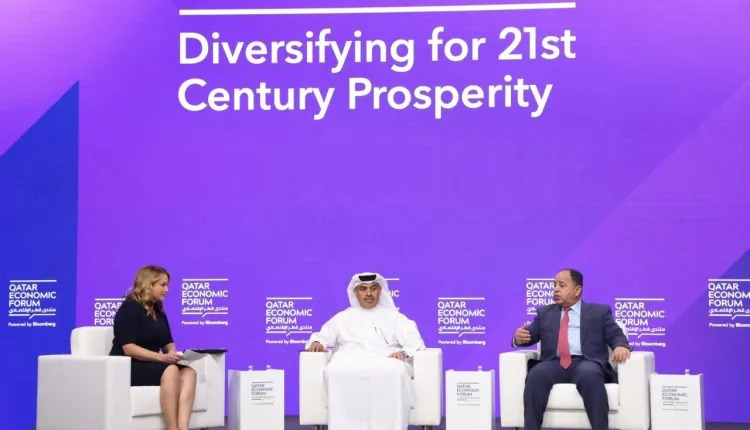 Minister of Finance Mohamed Maait affirmed that he is looking forward to increasing Gulf investments — including Qatari ones — in Egypt, while transforming Gulf deposits in Egypt into real investments that benefit from promising development opportunities available in various fields.

Maait also indicated his appreciation for the Gulf’s growing role in supporting Egypt during the current global economic crisis that was exacerbated in the wake of the coronavirus pandemic and the outbreak of war in Europe, which imposes on us — as an Arab society — a necessity to cooperate and integrate to protect Arab economies from exceptional global challenges.

During his participation in the Qatar Economic Forum that was held under the slogan ‘Achieving equality in the global economic recovery equation’ in the presence of a number of heads of state, official figures, and senior officials, Maait said that the Egyptian government is moving strongly towards empowering the private sector.

Furthermore, he explained that an ambitious programme has been prepared to attract private investments in a group of Egyptian state-owned assets in several promising sectors that have become more attractive to regional and international investment funds, as they provide stimulating opportunities in renewable energy, telecommunications, water desalination, and real estate projects in new cities.

He added that the government targets $2.6bn in investments in the pharmaceutical and medical supplies sector; $1.5bn in construction, building, and mineral inputs; $2bn in agriculture and food; $2.5bn in the textile sector; $4.1bn in engineering; and $4.3bn in the chemical sector in a manner that enhances the role of the private sector in maximising production capacities to achieve self-sufficiency and food security.

This is in addition to increasing the country’s export power to attract hard currency, especially in light of the severe turmoil in supply chains, rising shipping costs, and commodity prices.

The minister also indicated that the government is opening the door to the green economy for the private sector and financial institutions in Egypt to benefit from the growing green finance market, after the country issued the first green bond offering in the Middle East and Africa in September 2020 at a value of $750m and a $1.5bn green loan.

He also stressed that the State Ownership Policy Document aims to increase the participation of the private sector in public investments from 30% to 65% in the next three years while maintaining a growth of 7% or more for the Egyptian economy in the face of exceptional global challenges, pointing out that the government plans within three years to exit from 79 sectors and reduce its investments in 45 other sectors in a way that contributes to making more room for the private sector and attracting $40bn in investments over the next four years.

The minister explained that the Egyptian economy has demonstrated resilience in the face of global challenges and absorbs internal and external shocks.

Moreover, he affirmed the government’s keenness to achieve financial and economic goals despite all the successive global crises, pointing to a significant improvement during the second half (2H) of 2021, as the non-oil exports sector recorded its highest rate in years at 37%, while the tourism sector recorded revenues of about $6bn, adding that the government aims to maintain a sustainable growth rate of at least 6% in the face of exceptional global challenges.

Maait explained that the economic recovery plan initiated by the state in implementation of presidential directives included allocating EGP 130bn to finance a social protection package to deal positively with the negative effects of the war in Europe, as well as mitigate the imported inflationary wave on the most vulnerable groups and sectors most affected.