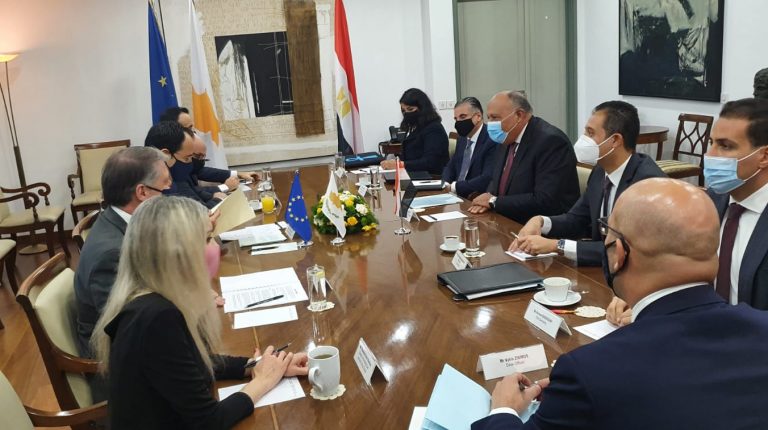 Minister Shoukry delivered a message from President Abdel Fattah Al-Sisi to his Cypriot counterpart, within the framework of the close relations between the two friendly countries and the joint keenness of the leaders of the two countries to advance those relations.

Ambassador Ahmed Hafez, the spokesperson for the Ministry of Foreign Affairs, said that Minister Shoukry praised the level of relations by launching the High Committee for Egyptian-Cypriot cooperation during the Cypriot President’s recent visit to Cairo in September.

He pointed out that both countries share the desire to advance the files of bilateral cooperation in all political and economic fields.

The meeting dealt with a number of cooperation projects in several fields, most notably energy, agriculture and transport, and the importance of following up cooperation in the field of electrical interconnection.

Minister Shoukry stressed the role of the eastern Mediterranean Gas Forum in supporting regional cooperation in the field of energy in the region, congratulating the Cypriot side on the imminent assumption of the presidency of the forum from Egypt at the beginning of next year.

For his part, the Cypriot President stressed the great interest of Cyprus to strengthen cooperation with Egypt in various fields, and look forward to activating the proposed projects and looking for new prospects for cooperation in light of the close relations and partnership between the two countries.

Later on Tuesday, Sameh Shoukry and his Cypriot counterpart Nikos Christodoulides held a consultation session to discuss all the issues of bilateral relations between the two countries and ways to move them forward.

The consultations dealt with the ongoing and proposed bilateral cooperation projects, which were discussed during the first meeting of the High Committee for Egyptian-Cypriot cooperation chaired by the presidents of the two countries in Cairo in September.

This includes the fields of energy, agriculture, transport, health, culture, consular issues, investment, and increasing trade exchange to reflect the level of relations between the two countries.

The two ministers exchanged views on issues of common concern, where Minister Shoukry presented the Egyptian position on developments in the Palestinian issue, Libya and Syria, and the importance of maintaining stability in the Eastern Mediterranean region.