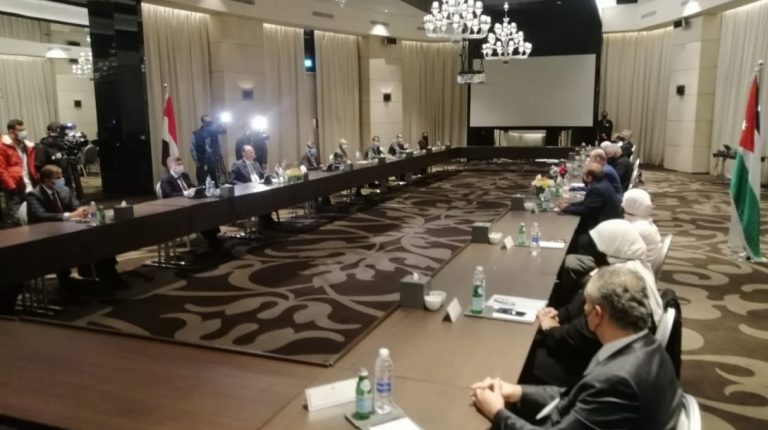 The meetings were chaired by: Egypt’s Tariq Al-Shaarawi, Adviser to the Minister of International Cooperation and Supervisor of the Arab and African Cooperation Potfolio; and Jordan’s Youssef Al-Shamali, Secretary-General of the Ministry of Industry, Trade and Supply.

Experts from the Egyptian and Jordanian sides are working to discuss the proposed documents to be signed during the Higher Committee meetings.

This is in addition to areas of joint cooperation, through various sub-committees, namely: the Security, Political and Consular Committee; the Economic and Trade Committee; and the committees of Energy, Transport, Agriculture, and Document Reviewing and Drafting.

The experts also reviewed proposed areas of cooperation in several sectors, including irrigation and housing.

Egypt’s Minister of International Cooperation Rania Al-Mashat held a coordination meeting with a Jordanian delegation last February, at her ministry’s headquarters. The Jordanian team was headed by Minister of Industry, Trade and Supply Maha Ali,  in the presence of nine representatives from Egypt’s ministries.

The meeting took place to prepare for the 29th Joint Egyptian-Jordanian Higher Committee. The two sides discussed details and technical features of documents that will be signed, and which aim to enhance joint economic, trade, and investment relations.

The Higher Committee, headed by Madbouly and Al Khasawneh, will meet on Tuesday, and is set to see the signing of a number of bilateral cooperation documents.

The Joint Higher Committee is considered one of the most important tools for economic diplomacy at the Ministry of International Cooperation. It is also the most effective one for establishing new bilateral cooperation between Egypt and neighbouring Arab countries.

The Ministry of International Cooperation supervises the preparation and organisation of these committees at the ministerial and expert level.

Set up in the mid-1980s, the Egyptian-Jordanian Committee is the first joint Arab committee. Since its foundation, the committee has held a total of 28 sessions, the most recent of which was held in Cairo in July 2019. It concluded with strengthened economic cooperation relations across various fields.