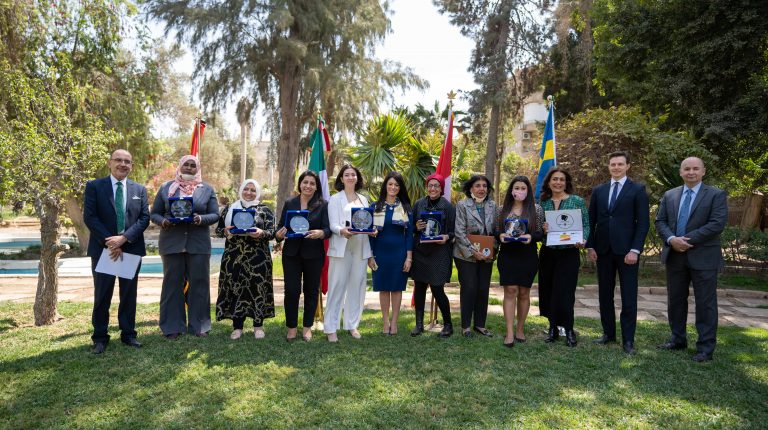 Egypt’s Minister of International Cooperation Rania Al-Mashat is among nine Egyptian women to receive the Champions of Change Award.

The awarding ceremony was held on Thursday morning, at the residence of the Mexican Ambassador in Cairo, Jose Octavio Tripp.

The Ambassador handed out the awards together with Canada’s Ambassador to Egypt Louis Dumas, and the Chargé d’Affaires of Sweden, Per-Axel Frielingsdorf. The awards were handed out as a part of the celebrations for Egyptian Women’s Day by the respective embassies.

The ceremony witnessed the honouring of Minister Al-Mashat, along with eight other women who have all contributed to making Egypt a more gender equal society.

Among the awardees were: Mona Korashi, a pioneer in the field of women’s rights in Egypt and a member of the International Women’s Alliance; Heba Rashid, founder and CEO of the Mersal Charity Foundation, which had a prominent role in supporting the medical sector in facing the novel coronavirus (COVID-19) pandemic; and Souad El-Sayed Abdel-Rahim, Head of Nursing at Al-Qoutrien Hospital in Aswan.

Other awardees are: Nadine Ashraf, founder of the “Assault Police Egypt” Instagram page, an unprecedented online platform that aims to raise the awareness of survivors of sexual harassment about their rights guaranteed by the law; Mirna Abdel Azim, an official at the International Organization for Migration (IOM), where she works to provide protection for migrants and refugees; Rawan Bassem, Managing Director of Enpact Egypt, who leads the empowering entrepreneurship initiative into closing the gender-gap every day; Eman Rasmy, a successful model for women in the field of innovation and information technology in Upper Egypt; and May ZeinElDein, Founder & President of Alhassan Foundation

“Women’s participation is micro critical, and we know that if there is gender parity, Egypt’s GDP goes up by 34%, so with our international partners we are working hard to achieve these goals,” said Minister Al-Mashat, “I take this opportunity congratulate the other women who have received this very distinguished awards. This will be more appetite to do more for the beautiful ladies and men in Egypt.”

The Champions of Change awards were established to recognise the contributions of Egyptian gender equality pioneers and their efforts in building a stronger country. Gender equality is a priority for Sweden, Canada and Mexico, three countries that all have feminist foreign policies.  The award ceremony takes place in conjunction with the celebration of International and Egyptian Women’s Day.

Sweden was the first country in the world to adopt a Feminist Foreign Policy and Sweden works in Egypt and the Arab region more broadly to promote women’s economic empowerment through a number of initiatives.

The Swedish Development Cooperation Agency (Sida) funds a programme focusing on the social, economic and legal empowerment of Egyptian women, in partnership with the Egyptian Government, UN agencies, and civil society actors.

“It is crucial to include a gender perspective in the COVID-19 response,” said Frielingsdorf, “With our feminist foreign policies, we seek ways to mitigate the consequences of the pandemic and improve the situation for women and girls, also in the long term, as we build back better so that women and girls will have the rights, the representation and the resources that are theirs.”

Mexico was the first country in Latin America to adopt a feminist foreign policy, joining countries from around the world, including Canada and Sweden, that put women and girl’s rights as a top foreign policy objective.

Ambassador Tripp said, “We support efforts to eliminate structural differences, gaps, and gender inequalities in order to build fair and prosperous societies. Women are at the core of the fight against the COVID-19 crisis: they are leading the health crisis response, where women make up almost 70% of the health care workforce.”

Ambassador Dumas said, “Our feminist foreign policies are directed towards measures that build a more peaceful, inclusive and prosperous world. None of these goals can be achieved without empowering women and girls. The emerging coronavirus pandemic makes this priority more important than ever.”

Opinion| In the face of challenges, we need to work together