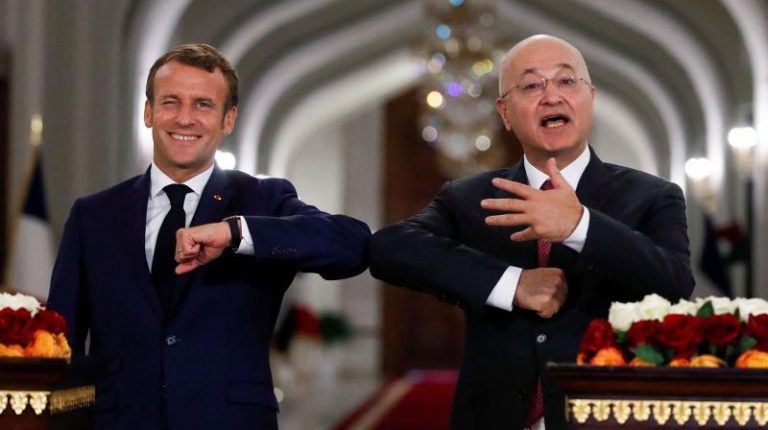 The biggest challenge facing Iraq is foreign intervention, French President Emmanuel Macron said, on Wednesday, during a visit to the country. Macron also called upon Iraqi officials to build the country’s sovereignty.

Macron’s remarks came during a joint press conference with his Iraqi counterpart, Barham Salih, during the French President’s first official visit to Iraq. During the press conference, Macron also said that foreign interference has weakened the Iraqi state.

He asserted that Iraq faces many challenges due to war and terrorism, and that the battle with the Islamic State (IS) is not over.

Salih added, “We do not want our country to turn into an arena for the conflicts of other countries.”

“We talked about a future project, using nuclear energy to produce electricity and peaceful projects, which will be under the supervision of the International Atomic Energy Agency (IAEA), and which will create jobs and address electricity shortages,” Al-Kadhimi said in a news conference.

Macron said they also discussed military cooperation to counter IS militants as well as French support for building a subway system in Baghdad.

The French President added that any military cooperation with Iraq should be respectful of its sovereignty. He added that France supports Al-Kadhimi’s efforts to safeguard the country’s sovereignty, as well as to “normalise” all armed forces, referring mostly to Iranian-backed Shiite militia groups.

Earlier on Wednesday, Macron expressed his country’s support for Baghdad. Writing on Twitter, he added that there are many challenges to ensuring Iraq’s sovereignty, whether within the country or elsewhere in the region.

Iraq has become an arena for the conflicts between its two allies, the US and Iran, as groups backed by the latter are suspected to be behind several rocket attacks on US diplomatic, military and commercial facilities in Iraq.

On Tuesday, Macron announced that he would be visiting Iraq to launch an initiative, in cooperation with the United Nations (UN), to support a process of sovereignty in the country.

Iraqis had “suffered so much,” and they deserved options besides domination by regional powers or Islamist extremism, Macron added.

He also said that France fully supports a project to “consolidate the (Iraqi) state” in the economic, military, educational and cultural sectors, describing it as a “project for Iraqi sovereignty.”