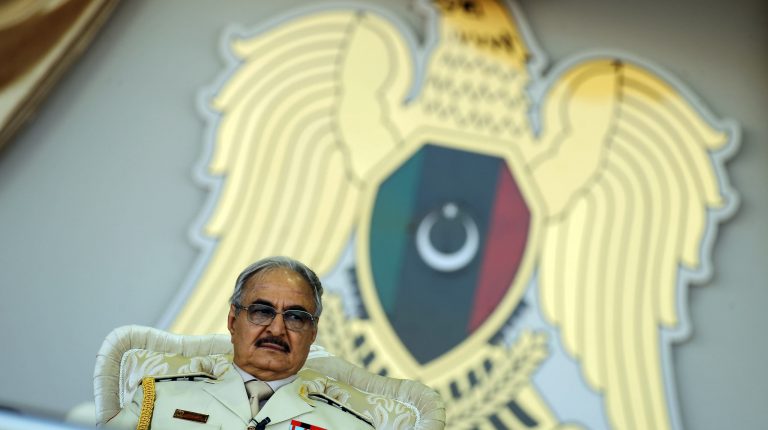 The Libyan Arab Armed Forces (LAAF) has sent a letter, on Sunday, to the US calling for international intervention to resolve the Libyan crisis, according to the Al Arabiya news channel.

Al Arabiya cited sources saying that the letter rejected any negotiations with Turkey, and called for international monitoring of the country’s land and sea ports. The move would prevent Turkey from sending weapons and military equipment into Libya to support the Government of National Accord (GNA).

Also on Sunday, the LAAF said that it is ready to confront any “attack on Sirte by Turkish-backed mercenaries,” Sky News Arabia reported.

On Saturday, LAAF Commander Khalifa Haftar announced that his forces are ready to “liberate the Libyan territories from the Turkish aggression and militias.”

He added that the LAAF will confront the mercenaries that Turkey has been bringing to Libya to fight with the GNA, and that he “will teach them a lesson.”

Addressing his troops during an inspection tour, Haftar said that Libyans will confront any colonists and that the country “will never accept to be invaded again as in the past.”

Haftar’s speech came as the Syrian Observatory for Human Rights (SOHR) announced that there are now about 17,000 Turkish-backed mercenaries in Libya.

Noteworthy, the LAAF is backed by Egypt, the UAE and Russia, while Turkey is the main supporter of the GNA.

Turkey has provided the GNA with drones and air defence systems, weapons, as well as thousands of Syrian mercenaries. There are also reports that Ankara is training Somali militants, and is bringing others from Tunisia, including Islamic State members, to fight with the GNA.

In January, Sirte was captured by the LAAF from militias allied to the GNA, following the expulsion of Islamic State militants in 2016.

The GNA, backed by Turkey, is now preparing a military operation to recapture Sirte. The move comes after the GNA seized the key military airbase of Al-Watiya, south of Tripoli, and Tarhuna city, leading to its control over west Libya.

Egypt to take any measures to prevent Libya falling under militia control: Shoukry