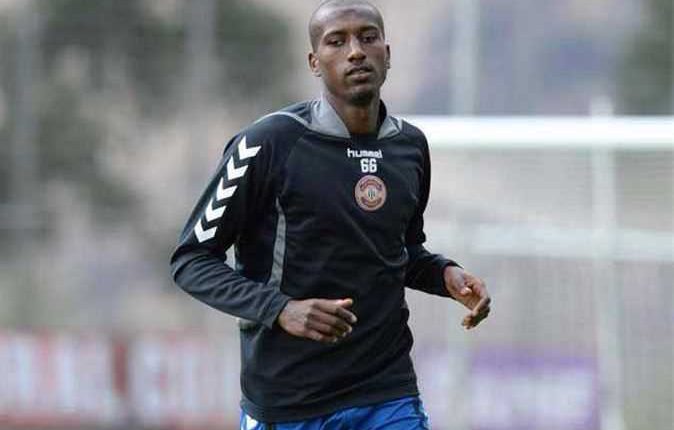 Egyptian national team midfielder Aly Ghazal has seen his fair share of criticism during his varied career. Ghazal, who also plays with Greek club Athlitiki Enosi Larissa FC, has moved between several European teams. His frequent inclusion on the Egyptian team has courted criticism from many quarters.

Daily News Egypt interviewed Ghazal to talk about his professional career and why many fans criticise him, in addition to the racism he has faced.

How do you see your experience with Athlitiki Enosi Larissa FC?

Praise be to God. it has been a good step and a new league just like any other leagues I have played in.

Why did your negotiations with Zamalek stumble?

There were no formal negotiations, but rather friendly discussions that did not go anywhere. Zamalek never made an official bid for my services.

Have you received requests to return to the Egyptian league?

No, there are no negotiations from the Egyptian League now, though there have been in the past two years.

If you had to choose, would you rather play for Al Ahly or Zamalek?

Of course, I will choose the appropriate financial and technical offer!

Are the Egyptian trio of Pyramids, Al Ahly and Zamalek capable of achieving continental titles?

Pyramids, Al Ahly, and Zamalek are moving well, especially Pyramids, which has an easier mission. The three teams have a chance to win, but the CAF Confederation Cup seems closer.

How do you view Javier Aguirre’s experience with the national team?

It was a very distinctive experience that ended tragically, although it has been a very good period.

Why have you been criticised for joining the national team?

This is mainly because journalists are biased and only want to see their friends on the national team. Every player with the national team is good, unless the players do not serve well with his team.

Why did the national team fail in the African Cup of Nations?

This was mainly due to technical reasons, especially in the game against South Africa.

What is your take on Amr Warda’s dispute with the national team?

Warda’s dispute is not with the national team, which is evident because nobody is saying that they have any problems with him.

How do you view Mohamed Salah’s statements about the right atmosphere not being there for the team during AFCON 2019?

Frankly, I did not hear anything about Salah’s statements regarding the appropriate climate, so I cannot speak about this.

Does Mohamed Salah have the leadership qualities for the national team captaincy?

People are very passionate about the leadership topic, but it is very simple. The decision should not be made upon overall performance, but rather some specific situations in which a player reflects a leader’s spirit. Of course, Mohamed Salah’s personality enables him to be the leader.

Did Salah pressure the administration to include players on the national team?

I do not believe Salah would do so. He is summoned to the team, just like any other player.

Do you expect to be back on the team?

God willing yes. I do not know when but hopefully will be back soon.

Have you received any calls from the national team’s current technical staff?

No, I did not receive any contact from the national team officials, but I hope, God willing, in the coming period.

Is Egypt capable of qualifying for the World Cup Qatar 2020?

God willing, I believe that we will be able to qualify for the 2022 World Cup.

Who is the best player in Egypt’s history?

I think that this topic is difficult! People make the comparison, but I cannot decide.

Has your skin colour hinder your professional career?

Comparisons have been made between your skin colour and that of your daughter, causing a social media controversy. How do you see this?

I would not describe this is as bullying, but only satire. The Prophet Mohamed banned us from making fun of people, but this has been and will remain one of the features of our culture, although this should not be accepted, especially in television series and films.

Minister of Youth and Sports Ashraf Sobhy has put aside some facilities under his ministry as backup for those already in use as quarantine areas for coronavirus (COVID-19) patients.

The ministry has played, at the directive of President Abdel Fattah Al-Sisi, a vital role in confronting the virus, in cooperation with the Ministry of Health and other concerned authorities.

Sobhy handed a report to Prime Minister Mostafa Madbouly outlining that a number of national youth and sports facilities are ready to work as medical isolation and quarantine areas. These include youth facilities, civil education centres, and youth hostels in a number of governorates.

The Ministry of Youth and Sports has also given the go ahead for 13 establishments to be used as a first stage for Egyptians returning home. Under the supervision of the Ministry of Health and the concerned authorities these facilities will be used as quarantine areas.

Some of the quarantined Egyptians, who include athletes, stressed that the comfort they enjoy reflects the extent of the Egyptian state’s concern for the lives, security, and safety. They have also heaped praise on the good medical treatment they have received and the appropriate health measures taken in quarantine facilities.

6- The Center for Civil Education in Beheira, 132 beds

7- The Center for Civil Education in Matrouh, 142 beds

8- The Center for Civil Education in Damietta, 140 beds

The fate of the league, National team Qualifiers, EFA elections

The five-member committee representing the Egyptian Football Association (EFA) and the main referees committee are facing many crises as they manage the fallout of the coronavirus (COVID-19) on the country’s sports events.

The fate of local competitions

The league has 149 matches left, which constitutes about 50% of the league’s remaining matches, in addition to three to four weeks for qualification before resuming activity. Minister of Youth and Sports Ashraf Sobhy said that the deadline for the decision to be made has been set for 15.

“It is customary that the beginning of the league’s new season will be in mid-September or early October, and if the current season is cancelled, different scenarios will be required,” Sobhy said.

He confirmed that he has requested that the five-party committee that manages the EFA communicate with clubs to develop a scenario in the event the current season is cancelled. The scenario would be taken into account for all first and second division clubs.

He noted that there is still enough time until the deadline to make a final decision on the future of the league’s activity.

The second crisis facing the EFA is the fate of the national team and the games they were scheduled to play for the African Cub of Nations 2021 qualifiers. The Confederation of African Football has yet to announce the proposed schedule for the games that were postponed due to the coronavirus (COVID-19) pandemic.

The lack of clarity on the current situation and the lack of announcements has hindered matches resuming as they may, yet again, be suspended once the national team is summoned.

The national team’s technical team, led by Hossam El Badry, is likely to hold extended camps in the coming period once sports activities resume, so the team can prepare for the African tournament’s qualifiers.

Hisham Hatab, Chairperson of the Egyptian Olympic Committee, has said the EFA will hold complementary elections that cover a one year period. He indicated that the EFA will be required to adjust its situation to match the 2017 Sports Law, allowing for one year to pass before elections for the new four-year term are held.

Hatab added that the handball and volleyball federations will also hold complementary elections before reopening the doors to nominations. He stressed that the law has been approved by FIFA, who cannot violate Egyptian law and cannot force the EFA to hold elections.

He said that if the elections were held for a four-year term, the new board will be subject to arbitration and will be dissolved in accordance with the sports law. Hatab noted that it is unlikely the five-member committee will be granted a one-year extension since it will violate the constitution. The election must be held for a one-year term then hold a new round of elections after the year passes.

CAF lends support to EFA in search for missing trophies

EFA rejects calls for delaying local league due to COVID-19

My experience in Zamalek remains positive, despite crises: Ricardinho

SIS head meets with US journalists over inaccurate reporting

Construction on new phosphoric acid project to start in June