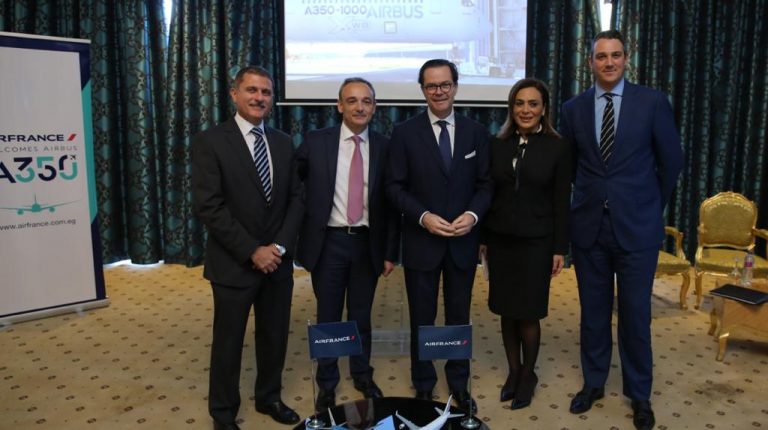 Air France announced on Wednesday allocating its newest aircraft, Airbus A350, to operate on Paris-Cairo route 6 days a week, the second world destination after Toronto.

This environmentally-friendly aircraft is equipped with 324 seats, 34 in the Business cabin, 24 seats in Premium Economy, and 266 in Economy.

This aircraft consumes 25% less fuel with less emissions due to the incorporation of materials which are 67% lighter. In addition, its noise footprint decreased by 40%. Air France has decided to partially power the Airbus A350 ferry flight between Toulouse and Paris-Charles de Gaulle with biofuel.

This initiative underlines the importance of biofuel for the aviation sector and Air France’s commitment to contributing to its development.

“The main lever for reducing our environmental footprint remains our fleet modernisation today, symbolised by the A350 to Cairo. Our ambition is to exceed our customer’s expectation, while reducing our environmental footprint. We, therefor, invest in the renewal of our fleet, introducing the latest-generation aircraft with the A350,” said Frédéric Burban, country manager for Egypt, Air France-KLM.

“At the same time, we have upgraded our cabin features to let our customers experience the most comfortable journey. I am very pleased we can offer this product now on our Paris–Cairo route,” he added.

Burban revealed that the A350 was launched first in Toronto on 27 October, and now Cairo will be its second destination and is scheduled to be launched in four other destinations including, Abidjan, Bamako, Seoul, and Bangkok.

Commenting on the launching, Stéphane Romatet, the French ambassador to Egypt, stated that the French government, Egypt government, and Air France look to bring more French tourists to Egypt and to increase the inflows of tourists between the two countries.

“French tourism is back in Egypt, and will show a new record in the number of French tourists in Egypt,” the ambassador added.

He stated that launching the A350 will help serve increasing French visitors to Egypt.

“My message for Air France is that there is room to increase the number of direct flights between Cairo and France,” he stated.

He stated that choosing Egypt for A350’s launch is considered a strong message of confidence.

KLM to resume flights to Cairo on 9 September