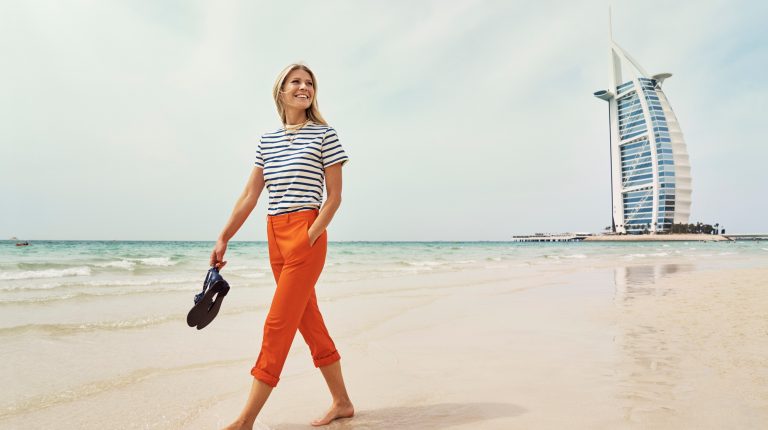 The project centres around the short film ‘A Story Takes Flight’, which stars the actresses as themselves embarking on three journeys of exploration through Dubai.

CEO of Dubai Corporation for Tourism and Commerce Marketing (DCTCM) Issam Kazim said, “A Story Takes Flight’ is unlike any other film in that it speaks to the defining character of our city. It is a story of each person’s discovery through their interaction with Dubai. Regardless of who you are or where you are from, your journey with us also has no finish line – and the paths to explore are endless.”

Filmed by Emmy and Director’s Guild award-winning director, Reed Morano, who is known for her immersive, natural, and cinematic style, the film captures the essence of each actress and the intimate relationship between them, while capturing the beauty of Dubai.

“One of my favourite parts of traveling is to truly connect with a city, its people, and the local culture. Dubai is special because it’s a melting pot,” Oscar award winning Actress Paltrow said.

“Those who were born here, and are so proud of their heritage, and those who are recent transplants, bringing with them their own values and traditions, contribute to writing the future story of the city. My time in Dubai was beyond anything I expected and there’s still so much more to see,” she added.

Kazim added, “As a city, we were thrilled to have the opportunity to host Gwyneth, Zoe, and Kate, and work with such an incredible director, which Reed is. Through the eyes of the actresses we see the values, connections, and experiences that are engrained in the fabric of Dubai. This is what we represent. We are proud to be a city home to over 200 nationalities and we welcome visitors to write the next chapter of their story here.