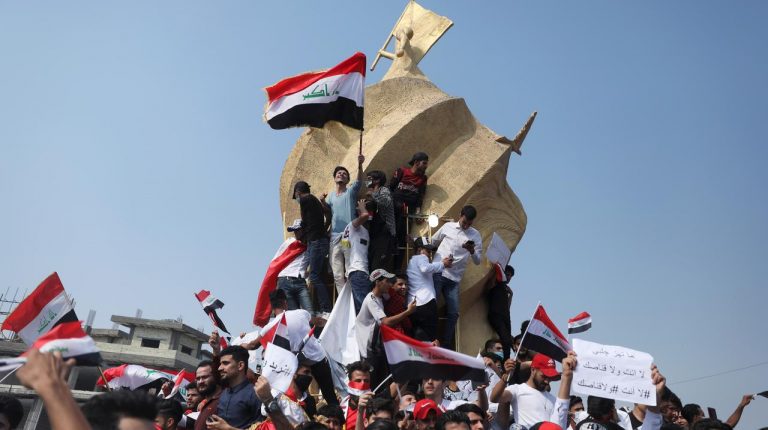 At least 74 were killed and more than 3,600 wounded during the new wave of Iraq’s protests in the past three days, over unemployment, corruption, and lack of public services, Iraqi High Commission for Human Rights (OHCHR) reported on Sunday.

The protests in Iraq started on the first of October and revived from 25 to 27 October. Most of the deaths occurred when guards of political parties shot the protestors while attacking the building, and the injuries were a result of the tear gas.

For the third day, the protesters gathered in the capital’s central Tahrir Square. The Students have also joined the protests in Baghdad, leading police to fire tear gas on Monday. While several schools and universities shut their doors, some students protested on campus and others headed to the main gathering spaces for rallies.

The UN assistance mission in Iraq had also condemned on Saturday the bloodshed during the protests. The mission said, “the protection of human life always comes first,” adding that it strongly denounces the destruction of public property.

During the protests, the security forces used tear gas, hot water, sound bombs, and batons to disperse the demonstrators in Baghdad and other provinces, according to OHCHR’s officials.

It was reported that Sunday’s protests were calmer than the past two days. However, the police forces clashed with protestors, firing tear gas canisters and sound bombs to disperse the demonstrators who tried to cross Al-Jumhuriya Bridge to reach the green zone, which houses the main government offices.

Moreover, the leader of the Sadrist Movement in Iraq Muqtada al-Sadr, warned on Saturday against turning into civil war in Iraq. He also renewed his demands for the government to resign, saying “If the authority cannot repair what their predecessors have corrupted, there is no good in them or their predecessors.”

Iraqi electoral coalition Alliance Towards Reforms “sairoon”, led by al-Sadr has also announced that it will join the opposition in the Iraqi parliament. Based on this, the coalition would turn to be an opposition, picketing inside parliament until the government responds to the demonstrators’ demands.

ISIS Caliph ‘suicides as a coward’: US Trump confirms