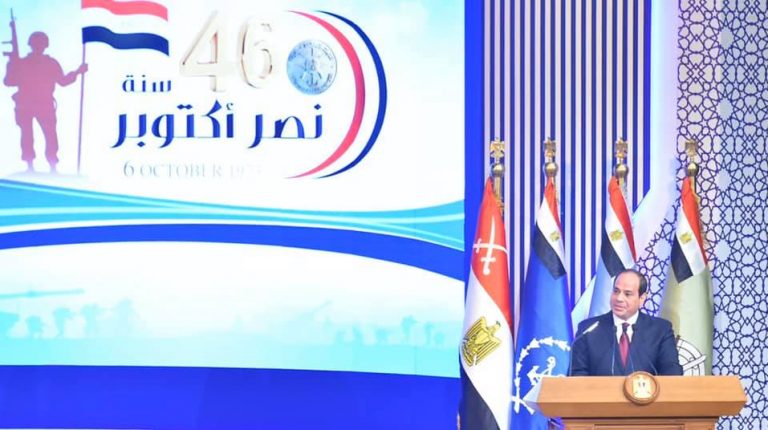 President Abdel Fattah Al-Sisi said he will meet Ethiopian Prime Minister Abe Ahmed Ali soon in Moscow to discuss the dispute over the Grand Ethiopian Renaissance Dam (GERD) and how to end the deadlock in a way that ensures the interests of all parties.

Speaking at the 31st Armed Forces Educational Seminar on the occasion of the 1973 October War, on Sunday, Al-Sisi said Egypt is currently suffering water poverty according to the international standards.

He noted that the 2011 Revolution and its impacts on the internal situation in Egypt prompted Ethiopia to unilaterally start the construction of the GERD, without consulting the Egyptian state.

“Unless the events of 2011, it would have been possible to put a plan for the establishment of the Ethiopian dam, which would guarantee the interests of both Egypt and Ethiopia. But this did not happen, as Ethiopia initiated the construction of the dam without consulting Egypt,” the president said.

He explained that after he assumed power in 2014, he concluded a protocol with Ethiopia and Sudan, which included several points, the most important of which was an agreement on how to implement and organise the filling and operation of the dam through trilateral negotiations.

Al-Sisi pointed out that the negotiations did not result in achieving technical consensus between Egypt and Ethiopia on these points.

In the same context, he stressed that the Egyptian state is moving rapidly to implement many desalination plants in many governorates of Egypt.

“The Egyptian state aims to reach the production of 1m cubic metres of clean water per day, to meet the growing water deficit in Egypt due to the rapid population growth,” he explained.

Al-Sisi pointed out that the share of water planned for Egypt through the Nile River and its tributaries of 55bn cubic metres annually is not enough to meet the different needs of water for the Egyptians.

He stressed that Egypt is keen on completing any settlement without harming the interests of any country in the region, regardless of the different positions and views.

On the celebrations of the 46th anniversary of October War, Al-Sisi said that Egypt has achieved victory in the war through the Egyptians’ will, patience, and action, pointing out that those countries, that do not have a national army and modern weapons, cannot enjoy security.

Al-Sisi added that he has been strengthening the capabilities of the Armed Forces since he assumed the post of Commander-in-Chief, noting that Egypt is a pivotal country in a turbulent environment.

He explained that the development of human civilization extended to include the concept of modern war, which includes information warfare and propaganda methods that deliberately mislead nations.

The president called on the Egyptian people to consider the surrounding countries and what happened in Syria, stressing that the majority of Arab countries refused the Turkish military intervention in Syria.

During his speech, Al-Sisi insisted that no intervention in Egypt will be possible. “God’s support to the Egyptian army will hinder any intervention in the country,” he said.

“Egypt does not seek to interfere in the affairs of any other country, but rather to preserve its land, interests, and national security,” Al-Sisi said.

“The army had to have a plan to acquire new and modern equipment and weapons in light of the great development that took place in the past 20 years. However, we did not announce it because the message may not clearly reach people,” he added.

On a different note, President Al-Sisi denied that anyone had been displaced in North Sinai during the Operation Sinai 2018 launched by the army to eradicate terrorism, as there were many demolished houses in the strip adjacent to the Gaza Strip. He noted that large compensations were paid to the affected citizens in the areas of military operations.

He stressed that the Egyptian state has never abandoned its citizens, and even if this took place due to war circumstances, all citizens were compensated and relocated in new cities.