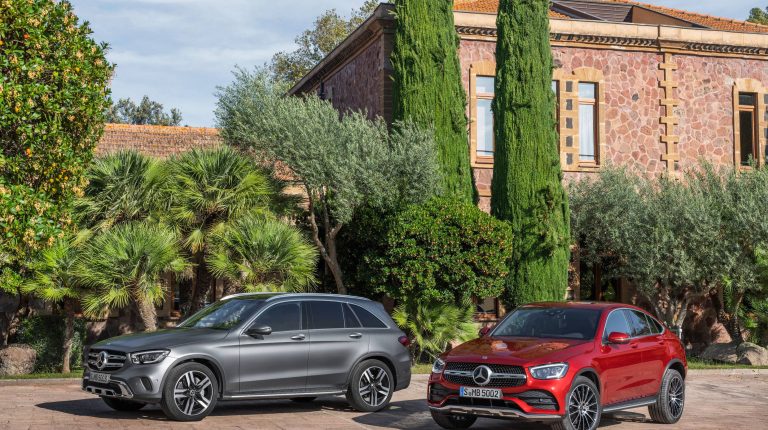 Mercedes-Benz Egypt has recently announced its introduction of two new models from the Mercedes-Benz GLC family range in Egypt, GLC 200 SUV and the GLC 200 Coupé. According to the company, GLC is the brand’s most popular SUV.

The exterior design is characterized by sporty features. A distinctive off-road look is accentuated by muscular surface contours and striking details such as the heavily contoured radiator grille and chrome trim that now continues from the front end to the rear as standard.  The redesigned headlamps and all-LED rear lights are also included as standard. The GLC Coupé marks itself out with its extra dynamic appearance and elegant lines. This model shows how harmoniously the design features of a coupé can be reconciled with those of an SUV, combining the sportiness of a coupé with the practicality of an SUV.

In the interior, a high quality of finish and high-grade materials are combined with user-friendly controls, thanks to two high-quality displays, a fully-digital instrument display and media display with touchscreen control. Both versions of the GLC feature the modern, learn-capable infotainment system Mercedes-Benz User Experience (MBUX). Its includes intuitive control using a variety of inputs such as touch control, gesture control, and the optimized voice control system, ‘Hey Mercedes’. New features also include wireless charging, the new generation of the multifunction steering wheel with touch controls, as well as Android Auto and Apple CarPlay.

The Mercedes-Benz GLC 200 SUV and GLC 200 Coupé are equipped with the next generation four-cylinder petrol engine, with a capacity of 1991 CC and an output of 197 Hp. Both models are equipped with a 9G-TRONIC automatic transmission with shift paddles and 4MATIC all-wheel drive system. This system further provides high traction and driving stability on any road surface.